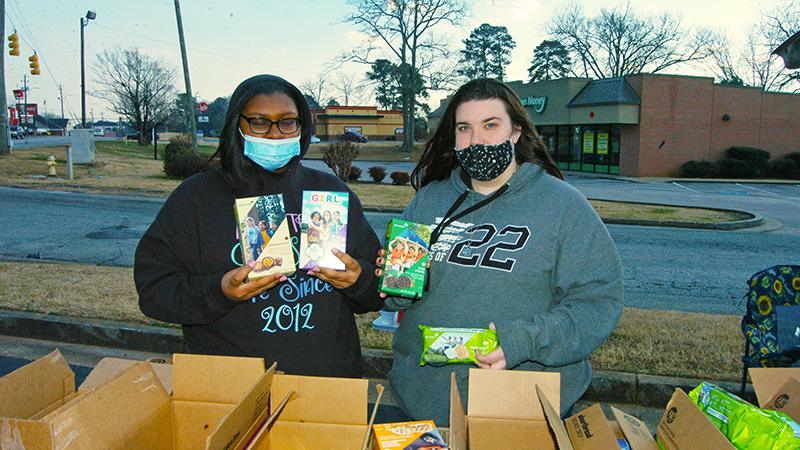 Cookie time: On Friday, KaeLynne and Katie of Troop 5018, Valley (above) had a booth set up in front of the Circle K store on Highway 29. The girls are seniors at Valley High and hope to take a trip to New York City this summer. Photo by Wayne Clark.

VALLEY — KaeLynne and Katie are seniors at Valley High this year who are long-time Girl Scouts. This is their final year in the program, and they are hoping to go out in a big way by taking a trip to New York City.

They have been raising money for the trip by selling Girl Scout Cookies for several years now. They are well within their goal, and should they make it they will probably be in the Big Apple this spring or summer.

“We’d like to go to Girl Scout Headquarters in New York City,” said Katie. “We’d also like to see the top sites.”

New York draws an estimated 40 million visitors every year from all around the world. The top destination in the City That Never Sleeps are Times Square, Central Park, the Metropolitan Museum of Art, the Museum of Modern Art, the Brooklyn Bridge, the Empire State Building and the Statue of Liberty.

“We may also take part in some scavenger hunts,” KaeLynne said.

The girls are determined to meet their goal. Friday afternoon was cool and windy, and Kaelynne and Katie were on the corner of 20th Avenue and 30th Street selling Girl Scout Cookies. Troop Leader Melissa Borders was with them.

“We will be selling through the first weekend in March,” Borders said. “We will be here on Friday and Saturday afternoons.”

“The Peanut Butter Sandwich and the Caramel DeLites have been popular this year,” Katie said.

Fraternal Hall and Stores building in Lanett primed for…