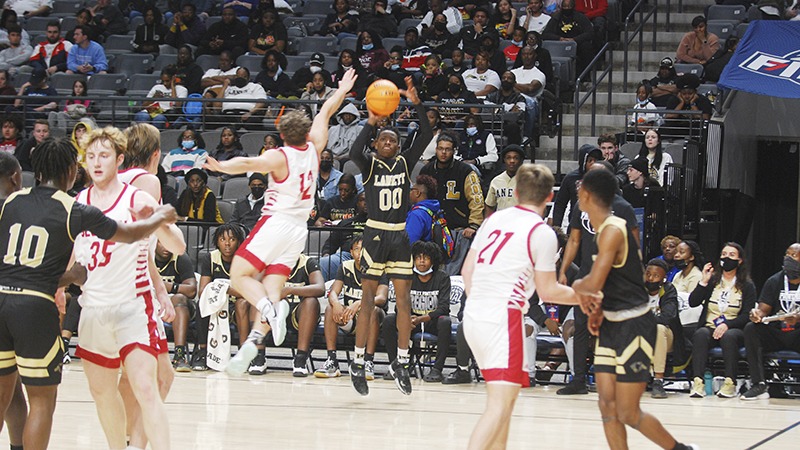 The Lanett Panthers boys fell to the Section Lions 81-58 on Monday in the AA state tournament semifinals.

“Last year, I told y’all we’d be back, and next year we’ll be back so look out for Lanett,” Head Coach Trentavious McCants said.

The Panthers got off to a slow start offensively and defensively as they were outscored 22-13 in the first quarter.

Lanett’s defense picked up considerably in the second quarter as they only allowed the Lions to score 11 points in the quarter. The offense still struggled but still scored 15 to keep the Panthers in the game. Lanett trimmed the lead to five as Elijah Whitfield got a tip-in to go at the buzzer.

“I think Section got kind of winded going into halftime, and our boys took it up another level,” McCants said.

Markavious Atkinson led the way for the Panthers in the first half with eight points on 4-for-7 from the floor. Atkinson ended the game with 19 points on 9-of-15 shooting — he also tied for the team lead in rebounding with eight.

Elijah Whitfield and Alanteo Cheeks were the only other players that scored in double figures in the game.

The Lions started the second half on a 7-0 run before Caden Story bullied his way into the paint for a 2-pointer. A flagrant foul was called on Section late in the third quarter and Bryant Story hit one of two free throws to trim the lead back to single-digits but that was the closest the game would get. The Panthers were outscored 23-10 in the third quarter, which had Lanett trailing by 18 heading into the fourth quarter with the game essentially being put to bed.

“That’s all these kids know is to fight,” McCants said. “That’s why you see me on the sideline yelling ‘fight.’”

The fourth quarter had to be played though, and it did not get any better for the Panthers in the final quarter. The Panthers had no answer on either end of the court for the Lions all evening and nothing changed in the fourth quarter.

Lanett’s bench was outscored 14-7 in the game as the majority of their production had to come from the starting five.

The Panthers have made three straight seminal appearances after winning three state titles from 2016-2018.