Heroes in headsets: The job of a 9-1-1 dispatcher is more than answering phones 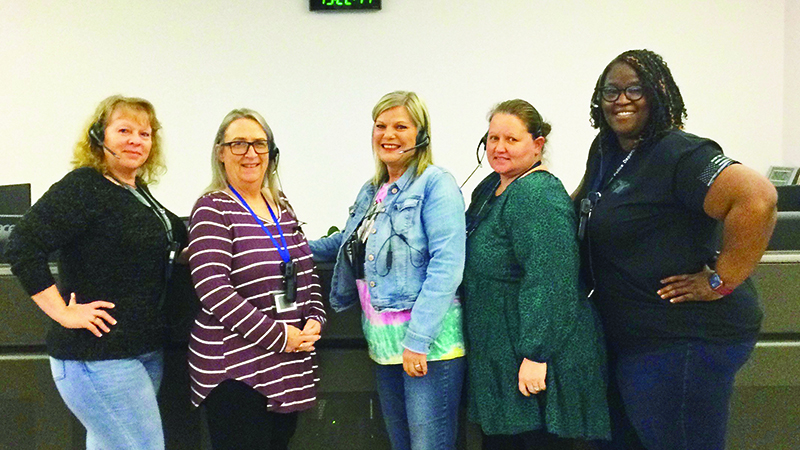 Unseen heroes: A few members of the Chambers County 9-1-1 dispatching team pose for a photo inside the Donnie A. Smith Building on Veterans Memorial Parkway in Valley. From left to right are Anna Ewoldt, Chris Hirshberg, Darlene Billingsley, Lynn Murphy and LaTosha Darden. Photo contributed.

When people think about dispatchers, they often only think of them as the person who will get first responders to the scene of whatever their situation is at that moment. They don’t realize that these men and women are really the first responders to any crisis and serve as the eyes and ears of almost every emergency.

“Words cannot explain what our 9-1-1 center means to me,”  Chambers County Sheriff’s Office Maj. TJ Wood said. “My 21 years of being attached, you know, through them and working with those dispatchers and administration out there, really a lot of times, it’s probably been because of them that I’ve went home.”

Unfortunately, dispatchers are not recognized as first responders but as Office and Administrative Support Occupations personnel — a more politically correct way of saying, clerical. The hope is that will change, according to Adam Brown, deputy director of Alabama’s 9-1-1 Board.

“There has been an ongoing initiative to have 9-1-1 personnel reclassified into the “protective” occupation category alongside their other public safety counterparts that has included a variety of efforts from the introduction of the “9-1-1 Saves Act” by Representative Norma Torres (CA) at the federal level in every session since 2019, varying state and local legislation and resolutions passed, and many grassroots awareness campaigns, both by 9-1-1 governing agencies and industry partners,” Brown said in an email to VTN.

“They’re our first line of communication,” Wood said. “A lot of people don’t realize how much a dispatcher does at one time. Their job is a lot like ours. They can be handling multiple 9-1-1 calls at one time, they can have a car accident on I-85 and be handling that car wreck on I-85, and at the same time have a domestic violence call in the Standing Rock area of Chambers County.”

Likewise, East Alabama Fire Department Chief Jacob Geiger said the role of the dispatch center is critical to the work his team has to do before arriving on call and once crews are on the scene.

“For us, that’s where it all starts,” Geiger said. “If it wasn’t for them, we would even know anything was going on. They’re the ones that essentially get us to where we need to go — if they don’t get us any information, then we’re kind of going in blind.”

Inside the walls of the Donnie A. Smith Communications Building, dispatchers are engaged in a high level of multi-tasking that Chambers County EMA/E-911 Deputy Director Kathy Hornsby calls “split ear hearing.”

“You have to be able to hear what’s coming through your headset and hear what that officer said on that radio,” Hornsby said. “So, if you’ve got a mother with an injured child screaming in your ear, you still can’t miss a beat on that officer that’s talking to you.”

Hornsby said there are 16 full-time dispatchers plus a supervisor and three part-timers that maintain four shifts of 12 hours each, but each dispatcher on a shift has to listen for other calls and can’t always listen in on every call.

“Yes, there are other people in there, and they listen out for each other,” Hornsby said. “But each one of them has their own people that they’re listening to also, and when it gets crazy busy, they focus on what they’re doing.”

Although the state of Alabama does not have a set of requirements, Hornsby said every dispatcher is required to go through detailed and intensive training to obtain several certifications that include National Criminal Information Center (NCIC), CPR, and basic life support training along with emergency medical dispatch (EMD) training and certification.

Communications Supervisor Darlene Billingsley and Shift Supervisor LaTosha Darden have over 50 years of combined experience working as 9-1-1 dispatchers in Chambers County and say one of the biggest challenges they face is getting closure.

“We, sometimes, don’t know the ending,” Billingsley said. “Luckily, we do have relationships with a lot of the officers and a lot of the paramedics, but sometimes we don’t get our closure. That’s the biggest challenge.”

Working in a smaller community such as Chambers County, there’s an increased chance of taking a call from someone they know personally.

“I’ve taken those calls, I’ve walked in on those calls — you just have to go with it,” Darden said.

Anyone that has ever made a 9-1-1 call knows how frantic the situation can be and sometimes, getting the information out of a caller can be a challenge, Billingsley said.

“We’re trying to get someone to these people. We’re trying to get all the information,” Billingsley said. “If we are on the phone with someone who is hysterical, if we can at least get address, we can get them in route, and we’re going to try and update them as soon as we can.”

According to Billingsley and Darden, the calls that tend to be the toughest are ones involving the elderly and children, but both say every calls sticks with them and the most rewarding are the ones that have a positive ending.

Billingsley recounts a call she took from a mother nearly 20 years ago where the baby stopped breathing and hearing everything that was going on at the scene.

“The officer was there before the medics, and he’s in there doing CPR on the baby. And I’m sitting there going ‘breathe,’” she recalls. “When I heard that baby crying and I could hear the officer’s relief and the mother, that was just awesome.”

Not every call has a happy ending and for those, dispatchers lean on each other for comfort and decompression.

“We kind of have each other to vent to and talk to,” Billingsley said. “We are a family.”

That family, she said, extends to the men and women they dispatch out to calls.

“I have a good relationship with all departments,” Darden said. “I like talking to everybody. I just love everybody. I go to the fire department and hang out with them, I get Snapchats from all my friends on off days, and they’re kids. They call me mama T.”

The passion for helping people drives both Billingsley and Darden to continue their work at the 9-1-1 center.

“I can sit at home drawing retirement right now — her [Darden] too. But I love our community. We love helping people.”