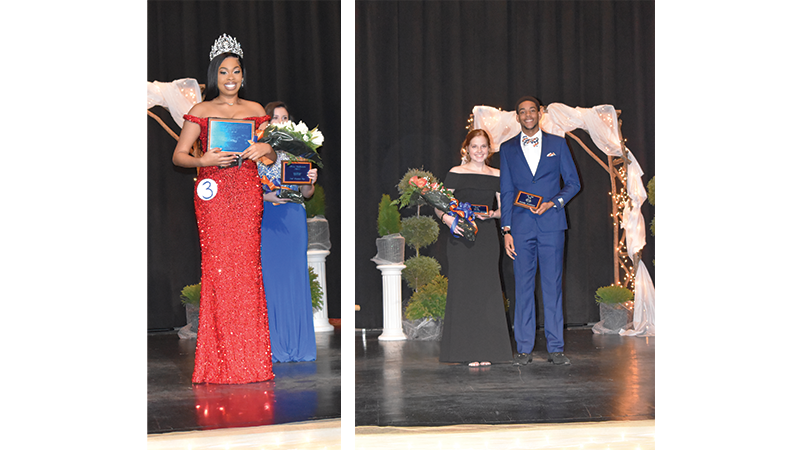 Crowned: Above on the left, Kristaan Carter was named Miss Vallerata 2022 during the Miss Vallerata pageant at Langdale Auditorium Saturday, Jan. 29. Standing behind her is second runner-up Madelyn Miles. Above on the right are Hannah Beasley, left, and Romel Jackson, right, who were named Miss and Mister VHS. Photos by Cole Trahan.

“The young lady who was voted Miss Congeniality for being the friendliest and most welcoming goes to Ms. Camryn Downs,” she said.

Carter, 17, is a member of several organizations including but not limited to the Beta Club, Key Club, the National Honor Society, the VHS Color Guard, and the Chattahoochee Valley Junior Amabssadors. When she isn’t studying for classes, she often babysits her nieces and nephews and volunteers at church or in the community.

After high school, Carter plans to attend the University of Alabama in Birmingham to major in nursing. After earning her bachelor’s degree, she plans to become a nurse practitioner.

Carter was asked a question that would leave many stumped.

“Describe this year as a food,” Ogle said. “What would it taste like and why?”

Carter answered that the year would be a Sour Patch Kid.

“This year has had many ups and many downs,” she said. “But [with] a Sour Patch Kid, you have the sour taste, and you’re like, ‘Ooh, I don’t know if I like this.’ And then you get the sweet taste of the Sour Patch Kid, and last year most definitely had some sweet moments and had some sweet memories. And then it’s gone, and you just have to savor what you had and savor the moment that you had that year.”

The contestants in the Mister and Miss VHS competition had been chosen by faculty through an interview process.

Jackson is a member of several organizations, including the National Beta Club, VHS football, VHS baseball and the VHS track team.

“He is also a member of Pilgrim Baptist Church of Lanett, Alabama, and he is also a junior member of the Village Community Outreach organization,” Ogle said. “When he is not studying for classes, you can find him on either the baseball or track field doing his best to improve his skills. He also likes to play video games, listen to 90s R&B, and hang out with friends.”

After high school, Jackson plans to attend college and major in exercise science with a concentration in sports medicine. After obtaining his bachelor’s degree, he plans to obtain a doctorate degree in physical therapy or attend medical school to become a doctor of kinesiology.

“When she is not studying for classes, you can find her writing poems, reading devotionals and short stories, playing with her animals, babysitting little ones, spending time with her grandparents, worshipping at her church and watching old TV shows such as “Murder, She Wrote,” “Golden Girls” and “Andy Griffith,” Ogle said. “After high school, Hannah plans to attend Southern Union State Community College to attain her associate’s degree and then transfer to Auburn University to major in early childhood education to become a kindergarten teacher.”