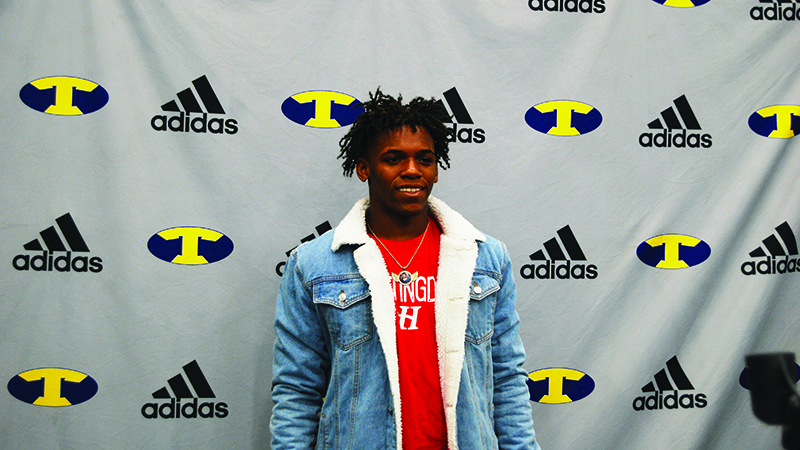 Title shot: Troup High School’s Kullum Irvin has his sights set on a state championship. Irvin is pictured at his signing day ceremony, where he signed to wrestle at Huntingdon College. Photo by Ethan Strang.

Kullum Irvin is looking to bring a wrestling state championship back to Troup County High School for the first time in over 20 years. Irvin placed fifth last year at the state tournament in the 152-pound weight class. This season he has been competing in the 138-pound weight class.

Irvin announced on National Signing Day that he will be attending Huntingdon College to wrestle and play football, but first he has unfinished business at Troup County.

“Kullum being a returning state placer, a senior and having six (college) offers in wrestling, my hopes for him are to improve on his performance from last season,” said Troup County head wrestling coach Drew Garner.

Irvin won the region in the 138-pound weight class earlier this season. He knows that he would not have achieved this without the support system Garner has put into place at Troup County.

“I want to thank my wrestling coaches, coach Gardner and coach (Matthew) Mclendon. They pushed me past the limits I originally set for myself,” Irvin said. “I am forever in debt to them.”

The respect between Garner and Irvin is a two-way street.

“He’s a leader on the mat, he’s a leader off the mat. His teammates look up to him, they listen to him,” Garner said. “Kullum is one of the guys that does all the little things right, even in the classroom and out of it. He’s what every coach is looking for in a captain.”

Irvin knows that his experiences at Troup County will live on in his memory forever.

“This Troup Tiger family is unlike any other family,” Irvin said. “They’re going to welcome you in with open arms and when you do something bad they’re going to let you know.”

With the state championship in wrestling only a week away, Irvin’s wrestling career at Troup County is coming to an end, but his time on the mat is far from over.

“I always knew I wanted to wrestle at the next level, it was my top priority,” Irvin said.

Irvin felt Huntingdon was calling to him all season and made his commitment to them official on Wednesday, Feb. 2.

“The coaches just made me feel at home. The coaches were coming to my tournaments and watching me wrestle, watching me progress throughout the season,” Irvin said. “It just made the decision that much easier.”

Irvin will wrestle in the sectionals on Feb. 4 and Feb. 5 and more than likely next weekend at the state championships. After that, you can catch him on the mat in Montgomery, Alabama draped in scarlet and gray as he suits up for the Huntingdon Hawks.