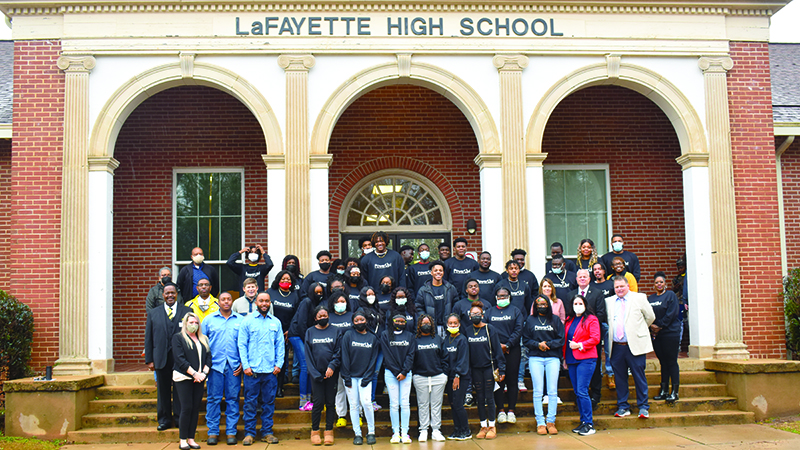 PowerUP!: Above, LaFayette High School seniors, judges, representatives from participating companies and others pose on the front steps of the school. Photo by Cole Trahan.

“This is a day that we’ve been thinking about and waiting on for a long time,” Chambers County School District Superintendent Casey Chambley said. “There have been a lot of people behind the scenes working to put this together for you and working for you to make this happen with SOLV Energy and with Heart of America and with UNITE.”

Chambley said the PowerUP! Challenge would be difficult, but it would also be fun. He said it would present students with the opportunity to build relationships that could lead to future opportunities.

Chambley called renewable energy “a thing of the future.”

“We know that certain energy sources that we use are not helping our environment, nor are they going to be around forever,” he said. “So, we have to look for alternative sources to do this. And that is the future of your jobs.”

He pulled out his cellphone and explained that there was nothing like it when he was younger; technology had evolved that fast.

He introduced the judges, who were Jeffrey Finch, president of the Chambers County School Board; LaFayette Mayor Kenneth Vines; Carrie Royster, executive director of the Greater Valley Area Chamber of Commerce and Taylor Teel, non-profit director of Camp Marannook.

Guest speaker Devon Mackay, a graduate of LaFayette High School and a SOLV Energy representative, discussed his career path and gave an overview of the PowerUP! Challenge.

Mackay said that after getting a college degree in business administration, he wanted to pursue a career with the NFL and attended the NFL regional combine in New Orleans without an agent.

Mackay’s life journey led him to Vermont, where he was first introduced to solar energy. When he returned to LaFayette, he heard about the solar facility.

After working for a different solar company, Mackay got a job at SOLV Energy and quickly rose through the ranks.

“One thing they said to me that has stuck with me to this day, they were like, ‘Devon, in one or two years, you have learned more than some of our techs that have been here for four or five years.’” he said. “And they were like, ‘How would you like to join our corporate office?’ No brainer. Most definitely.”

Mackay said he was supposed to move to San Diego in 2019, but due to the pandemic and having a son, he was given the opportunity to work virtually from LaFayette. Two months ago, he was promoted to being a project manager.

“What I’m telling you guys right now is, it’s all about what you put in,” he said. “What you put in, you will get out. It don’t matter how big or how small it is. And that is my main objective here in LaFayette. It’s to bring things to you guys like the PowerUP! Challenge.”

Mackay went over the phases of the PowerUP! Challenge and what prizes students could win. Challenge activities will start on Feb. 7 and end on March 18. Judging will begin on April 11, and winners will be announced on April 22.

The next speaker, Smith, graduated from Lafayette High School, attended Alabama State University and is currently a professor at the University of Florida. He held a question and answer session with the seniors.

A student asked him what opportunities would be available for students through the challenge. Smith answered that the overall purpose of the challenge is to expose students to the solar energy industry and perhaps inspire them to get jobs in that field. He said the challenge would be embedded in the seniors’ science courses.

“And so your science teachers are going to be working directly with you,” he said. “And SEI has designed an amazing curriculum, and so all of you are going to have the opportunity to do the challenge. So, you’re going to be learning about solar energy. We’re going to give you all the necessary tools and resources that you need to complete the campaign. And that’s where the competition comes in. And so, you do the four-week challenge, and then the competition is at the end where you do kind of like a solar campaign — kind of like a project. A science fair project, if you think about it.”

Another student asked if there were scholarships included in the program that she could apply for.

“I’ll go ahead and match, too,” said Jill Heath, president and CEO of Heart of America, an organization that modernizes learning environments in under-resourced schools.

“Our goal is to make sure that we’re aligned and that our school district is aligned with people that have your best interests at heart … I would put UNITE’s name behind working with SOLV. We’ve seen nothing but greatness from this organization. Everything that they committed to doing, we’ve seen them do. And we’re going on our second year, basically our second-year relationship.”

“You’re our first high school that we’re kicking this off with,” she said. “Another school is Kearny High School in San Diego, and we’re kind of hoping we can do some things where you can meet those students virtually, and they can meet you. And then we have Whitehorse High School, which is in Navajo Nation, and then we’re hoping another high school in Utah.”

Before the event ended, Smith had students repeat after him, “I’m driven and destined for greatness. No challenge is too high or goal too hard. The sky is not the limit.”

He had students point at each other and say, “Only you can stop you from doing what you want to do.”

“My life matters, and I plan to be great at all times,” he had them say, pointing to themselves.

Smith had the students point at each other and say, “I love you.”

He had them point at themselves again.

After the kickoff, the students were treated to free backpacks, each filled with a water bottle, a miniature solar-powered car, an additional miniature car kit and stickers.