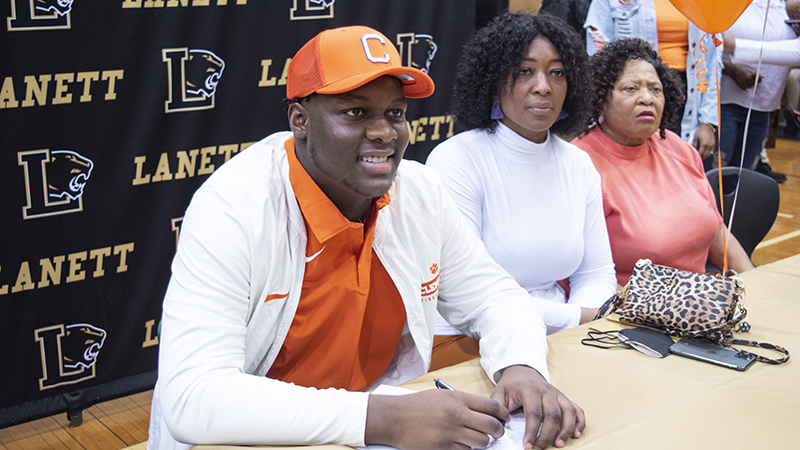 Above, Lanett’s Caden Story officially signs a letter of intent to play college football at Clemson. Photo by Daniel Evans.

Story was down to Florida, Auburn and Clemson when he made his decision Wednesday in the gymnasium at Lanett High School. Story, a four-star defensive line prospect, said he made his mind up three days ago.

“This decision was the hardest decision of my life. I wanted to choose all three schools, but I could only choose one,” Story said.

Originally committed to Auburn, Story decommitted in January and received a lot of attention from Auburn and Florida in the last few weeks. New Gators coach Billy Napier paid Story a visit recently, with the two even shooting some hoops.

In the end, it wasn’t enough.

Story credited Coach Nick Eason for making him feel comfortable with the Tigers.

“That’s my dude, that’s my guy. We have a very strong relationship,” Story said. “I trust and believe in everything he’s told me, and I feel like he’ll get the job done and get me to where I need to be in life.”

He said he felt a family atmosphere at Clemson.

“Your heart isn’t going to lie to you. Caden is one of those kids where he doesn’t want to disappoint nobody,” Clifford said. “At the end of the day, I told him you’ve got to make the best decision… I tossed and turned for him. I know how hard the decision was when he got back from Florida.”

Of course, Caden always had interest in Clemson, even from the earliest stages of his recruitment.

“Ever since eighth grade when I took Kristian to camp, he fell in love. Everywhere Kristian went, I brought Caden there, so he can see the lay of the land,” Clifford said. “He’s been a Clemson fan forever, and so it ended up working out.

Clifford has now had three sons go through the recruiting process and play college football. Kristian is at Alabama and Caden will be at Clemson, the two programs that have mostly dominated college football for the last decade.

“They are right there with wins, titles, NFL development, so you can’t go wrong either way,” Clifford said.