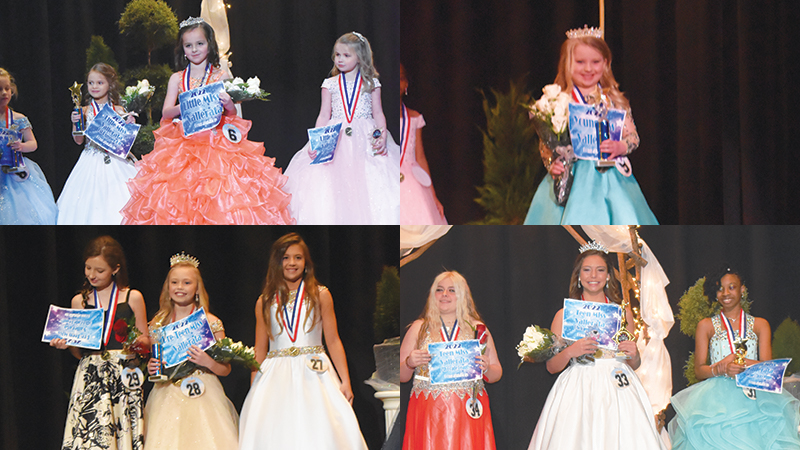 On Saturday, the Langdale Auditorium in Valley was filled with an audience gathered for the 2022 Little, Young, Pre-Teen, Junior Miss Vallerata beauty pageant involving girls in pre-K through the eighth grade. The event was held as a fundraiser to pay for the Valley High School cheerleading team to attend a national competition in Orlando.

The announcers at the event were Valley High School seniors Cayden Peacock and Emma Williams. Both are varsity and competition cheerleaders at the school.

In this group, Elmore won the people’s choice award and photogenic award. The pre-K beauty was Huynh, and the kindergarten beauty was Story. The second runner-up was Smith, and the first-runner up was Thrower. The 2022 Little Miss Vallerata winner was Scott.

“She is a brown haired, blue eyed beauty whose favorite color is light blue,” Peacock said of Scott. “She enjoys cheerleading, gymnastics and vacationing with her family at the beach. Her favorite food is cake, and her favorite TV show is “Mako Mermaids.” When she grows up, she wants to design jewelry. Sydney would surprise her grandmother by buying her some beautiful antiques because she loves her so much.”

“She is a blond haired, blue eyed beauty whose favorite color is purple,” Williams said of Gregory. “She enjoys riding horses, cheering, tumbling and being the best big sister ever.”

Gregory’s favorite food is tacos. When she grows up, she wants to be a barrel racer. She would like to surprise her mom with flowers and candy.

“She’s a blond haired, blue eyed beauty whose favorite color is blue,” Peacock said of Earl. “She enjoys gymnastics, riding horses and playing softball. Her favorite food is pizza, and her favorite TV show is “Big City Greens.” When she grows up, she wants to be a veterinarian. If Payton could surprise anyone, she would take her two best friends on a cruise because they have never been on a boat before, and she knows they would have a blast.”

“She is a brown haired, brown-eyed beauty whose favorite color is blue,” Williams said of Carter. “She enjoys softball, cheerleading and spending the summertime at the beach with her family. Her favorite food is the chicken sandwich from Chick-fil-A, and her favorite TV show is “Outer Banks.” When she grows up, she wants to be an archeologist. Ansley would like to surprise her younger siblings because she loves to see them smile.”