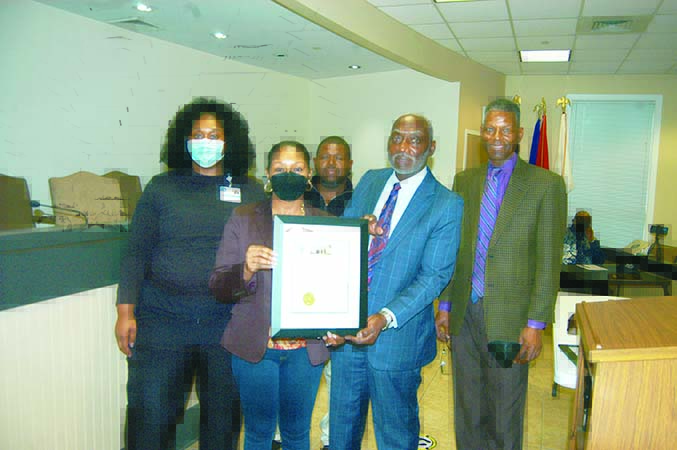 LANETT — Two men who played key roles in the West Shawmut community being annexed into Lanett were posthumously honored at the Monday meeting of the Lanett City Council. The annexation effort took place during the 1980s. Two West Shawmut businessmen, Will Ramsey Sr. and Jack Heard, were among the community leaders heading up the effort. Ramsey was president and Heard the vice-president of the West Shawmut Merchants Association at the time. Others involved in the effort were John Garrett, Alfred Lyons, Frank Jenkins and Homer Heard. Current county attorney Skip McCoy did the legal work for them. The goal of West Shawmut being annexed into the city was realized in 1988; Plant City came in simultaneously.

Mr. Ramsey would have celebrated his 100th birthday last Friday if he still lived today. Mr. Heard is the father of Mayor Jamie Heard.

“I didn’t know about this till the last minute,” Mayor Heard told The Valley Times-News. “I’m glad (Council Member) Tony (Malone) organized this. Both men deserve recognition for what they did.”

Ramsey was born on Feb. 18, 1922. He was the son of Ed and Hattie Ramsey. He and his wife, Gladys Trammel, Ramsey were married for more than 50 years and had four children — Willie Ramsey Jr., Gladys Ramsey Zanders, Perry Lee Ramsey and Marlene Ramsey Winston.

Mr. Ramsey was a local contractor and wanted West Shamwut to be annexed into Lanett to improve gas, water, sewer, and better mail service and neighborhood streets.

The late Homer Jack Heard was born on June 10, 1917, and was the son of Homer and Annie Bell Brooks Heard. Heard was married to the former Emma Lee Lovelace for 56 years. They had six sons and two daughters. Heard ran a taxi service for many years in West Shawmut.

A large crowd was present to witness the recognitions.

“Thank you all for coming out tonight,” said Council Member Malone. “This recognition is long overdue. I am glad their family members, friends and relatives are here to see it.”

“We are excited, happy and blessed to be here,” Phyllis Stiggers said on behalf of the two families. “These two men deserve all the accolades they can receive. Thank you, thank you, thank you for this recognition.”

On Monday, Mrs. Anita Billingslea and Mrs. Darlene Ray were also recognized with proclamation presentations, who are retiring from the Lanett Housing Authority, and Mrs. Clemmie Terry Jones, who celebrated her 99th birthday on Tuesday, Feb. 15.

Ray retired from the Housing Authority in December and Billingslea in January.

Ray was with the LHA for 46 years and Billingslea for 33 years. A Lanett resident, Billingslea began her career with the Authority in 1988. She started as a cashier clerk, worked as an accountant for 16 years and served as the executive director for 12 years before her recent retirement. She was the wife of the late Jonas Billingslea, who had volunteered as a coach and mentor for the Lanett Recreation Department, touching the lives of many local youngsters for more than three decades. The Billingsleas have three grown children: Anidra, DeMario and Jovantae; a nephew, Antonio, and four grandchildren, Taliyah, DeVaughn, Dacian and Reagan.

“I am so happy to be retiring after 46 years,” Ray said. “I want to thank my family, friends, relatives and co-workers for having stood by me for a long time. I want to thank the council and the mayor for this recognition.”

Ray has the distinction of having once been a housing authority resident in Lanett and working her way up to being the Lanett authority’s executive director. She was the authority’s senior property manager for 12 years leading up to her retirement. While moving through the ranks, she served as an accountant and assistant director for nine years and executive director for 16 years.

During her tenure, the Lanett Housing Authority acquired central heating and cooling for all tenants, built a new administrative office on First Street and awarded the first Alabama Association of Housing scholarships to housing authority tenants.

When Clemmie Terry (Jones) was a young child living in Randolph County, she came down with typhoid fever. Many didn’t expect her to survive it, but thanks to the grace of God, she recovered and is still among us now.

“She is a loving and classy lady who takes great pride in her appearance and her flowers,” the proclamation reads. “She enjoyed preparing meals, with her specialty being sweet potato pie. After many years, Mrs. Jones retired from working for Bill and Janet Cook as a housekeeper.”