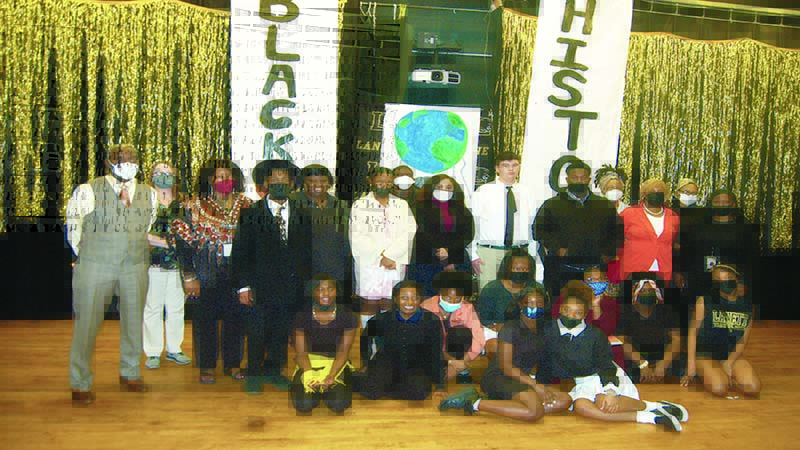 LANETT — Lanett May0r Jamie Heard was invited to speak to Lanett High students during a Black History Month program in the school auditorium on Friday. He gladly accepted, and in the 9:30 a.m. assembly program encouraged the students to be an active part in the continuing story of Black History both in the local area and beyond.

“It’s good to see my former students, although most of you have changed a lot since I was your principal at W.O. Lance Elementary,” he told them. “This is my first time in a school building since I retired on Dec. 18, 2020. I’m still not used to not getting up in the morning and heading to school. Before I retired, I had been in a school building for 60 years, and that’s a long time.”

Black History Month, said Heard, offers a chance to go beyond stories of slavery and racism to put a spotlight on the achievements of Black people. What’s now nationally recognized as Black History Week started out as Negro History Week in 1926.

“Carter Woodson is now known as the father of black history,” Heard said. “He wanted such an observance to take place in February because it coincided with the birthdays of Abraham Lincoln and Frederick Douglass.”

In 1976, President Gerald Ford recognized February as Black History Month, and Congress approved it as a national observance in 1986.

Heard said African Americans had invented many useful items over the years ranging from mailboxes to gas masks. George Washington Carver is well known for coming up with many uses for the peanut, but not that many people are aware of Charles Drew. He invented the modern blood bank. According to the Black Inventors Museum, Black inventors have given us the modern traffic signal, automatic elevator doors, coin changers, the ironing board and many other useful items. An African-American doctor named Daniel Hale Williams in recognized as a pioneer in the field of open-heart surgery.

“Black history—  its being made every day,” Heard said. “There are people in this area who have made history. In our city school system, Dr. Rose Morgan Wood was the first Black person with a college degree to work in the central office. Oscar Crawley was the first black person to be mayor of Lanett. The list goes on and on.”

Heard has made some history himself. He was the first Black principal at Central (now W.O. Lance) Elementary.

“Let me encourage you to strive to be the best you can be,” he said. “It doesn’t matter where you live or your economic status, you can do it. Don’t let anyone make you feel like you are a lesser person. Set goals, dream big and most of all, plan your work and work your plan.”

Heard told the students that he had grown up on Bourbon Street in West Shawmut. His dad drove a taxi and his mom worked in the lunchroom at Shawmut School.

“They taught my brothers and sisters and me to dream and to believe we could make something out of ourselves,” he said. “I wanted to work in a funeral home, be a teacher and a professional wrestler. I accomplished two of those goals, but as for being a wrestler, one time in the ring was enough for me.”

“I got hit pretty hard in the head a couple of times, and I decided that wasn’t for me,” he said to some laughter.

“Remember to stay focused,” he added. “Follow your dream, study hard, show respect to others and always listen to sound advice. Most of all, give your life to Christ. He will always lead you in the right direction. I challenge each of you to make history in a positive way. You may not be famous, but you can be a success in life. It’s always good to be gainfully employed and to set a good example for others to follow. You don’t have to travel the world if you can develop a love of reading. In reading a good book, you can take that trip around the world without ever leaving home.”

Heard received some appreciative applause from the students and sat down on the first row in the auditorium and took his turn in applauding as he watched the students perform skits about Black history.

There was a well performed song and dance done by singers Jadon McCullough, Kayla McKinnon and JaLaysia Lewis and dance routines by Tikyla Barrow and Dashayla Yancey.

The program concluded with students joining in with their classmates on stage to sing the first two verses of James Weldon Johnson’s “Lift Every Voice and Sing,” which has been called the Black National Anthem.