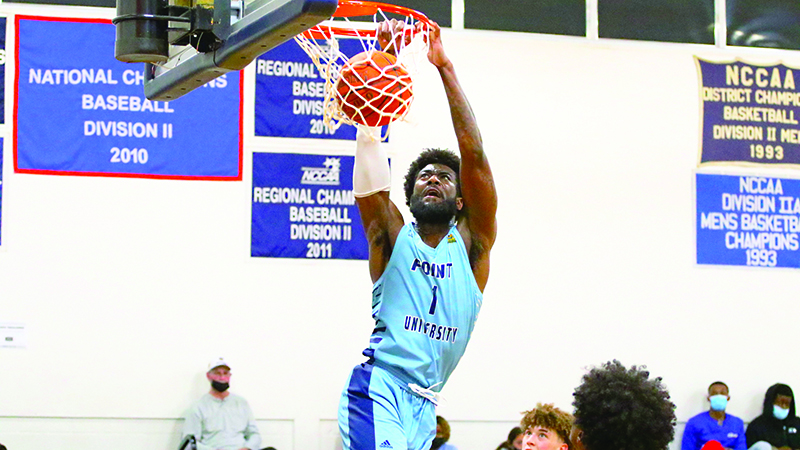 Throw it down: Point’s Corey Bowen throws down a dunk in the Skyhawks’ dominating win over Milligan. Photo by Point University.

The Point University men’s basketball team hosted Milligan University Wednesday afternoon in their Appalachian Athletic Conference matchup of the season, and the Skyhawks defeated the Buffaloes 82-61.

It was a tight first half, as Point entered the break leading 33-31. Milligan took a six-point lead with 13:20 remaining in the half, but a 3-pointer, layup and two made free-throws from Jack Gray would help bring the Skyhawks within two, and a layup from RJ Selman would tie the score at 21 with 7:35 remaining.

With 1:22 remaining, the Buffaloes would bring Point’s lead back down to two, which is where it would stay for the rest of the half.

Ray Reeves opened the second half with a triple to help spark the Skyhawks’ offense. Reeves would begin a 10-2 run to help the Skyhawks earn a double-digit lead (43-33).

Bowen led Point’s offense with 18 points, going 7-for-10 from the field and 4-for-5 from the free throw line. Jake Smith nearly recorded a double-double with eight rebounds and nine points and added six assists.

The Point University women’s basketball team held a two-point lead going into the second half of Wednesday afternoon’s Appalachian Athletic Conference matchup with Milligan University, but an explosive third quarter by the Buffaloes would be the contest’s defining factor, as Milligan went on to win 68-54.

Both teams were tied 6-6 in the first quarter before a layup from Hannah Williams, followed by an old-fashioned 3-pointer from Nicole Izuagie, would give the Skyhawks a five-point lead. Back-to-back 3-pointers from the Buffaloes would give Milligan the lead 12-11, but Sheyvonne Owens would connect for back-to-back layups to provide Point with a 3-point advantage (15-12). At the buzzer, Milligan’s Kristy Galea would connect for a triple to even the score at 15 entering the second quarter.

The Buffaloes again would work their way back and tie the score at 27 with less than a minute remaining, but a trip to the free-throw line from Williams would give Point a two-point advantage entering the second half (29-27).

Over the first five minutes of the second half, Milligan opened with an 11-3 run to jump ahead 38-32. A triple from Izuagie would cut the Buffaloes lead back down to three, but Milligan would answer with an 11-2 run to close the half. Milligan entered the final quarter leading 49-37 and would hold its lead for the rest of the game.

Point will host Tennessee Wesleyan inside West Point Park Gymnasium Saturday. The Skyhawks will honor the members of its senior class prior to Saturday’s contest.