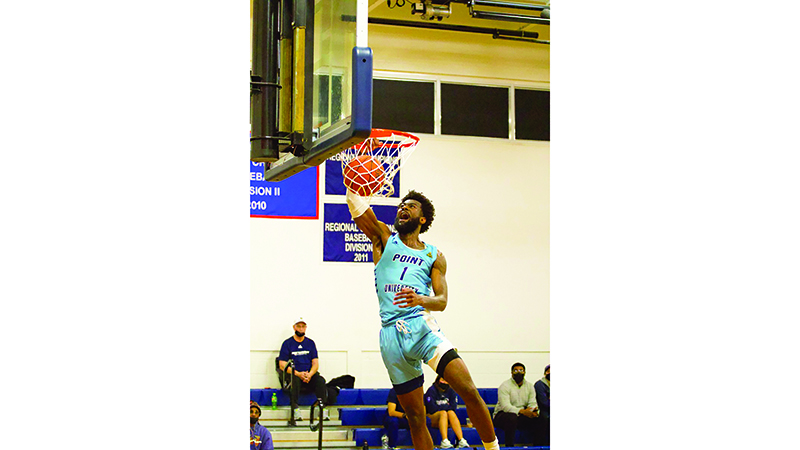 Throw it down big fella: Point University’s Corey Bowen throws down a dunk as the Skyhawks turn the AAC upside down, defeating the Appalachian Athletic Conference’s No. 1 ranked Union College on Monday. Photo by Point University.

Ray’Shawn Dotson sparked an offensive run for the Skyhawks sinking two triples in the first half to give Point a 14-9 lead with 13:10 remaining. Point earned their biggest lead of the half with two three-pointers, the first from Bowen and the second from Dotson and Ray Reeves, rounding it out with a jumper to make the score 31-18 Point. At the break, Point led 40-29.

In the second half, Union began to work away at Point’s lead, bringing the game within two following a made jump shot from Union’s Teddy Fifer (45-43). The Skyhawks responded with an 8-0 run to extend the score out by 10 with under 11 minutes remaining, but the Bulldogs did not allow Point’s lead to get any further, as they worked their way back to trail by one following two free throws from Union’s Markelle Turner (55-54). This, however, was as close as Union would come as Point held its lead for the remainder of the contest.

Five Skyhawks made their way into the double-figure scoring column. Bowen led the way with a team-high of 16 points, adding on seven rebounds. Lorenzo Freeman Jr. and Jake Smith nearly clinched a double-double with 14 points and nine rebounds for Freeman and 11 points and nine rebounds for Smith. Smith led the team with five assists and Freeman followed with three. Javier Turner clinched a double-double with 10 points and 11 rebounds and recorded five blocks. Dotson rounded out the Skyhawks in double figures with 10 points, going 3-of-4 from perimeter shooting.

Point will return to action on Saturday, Feb. 5, as they travel to face AAC foe Tennessee Wesleyan. Game time is scheduled for 4 p.m.