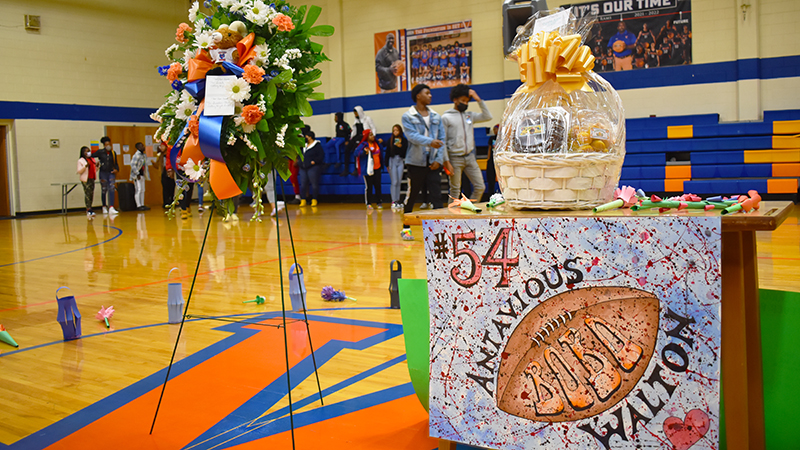 Remembering a classmate: In the center of the Valley High School gym floor, students set up a memorial display with a wreath, a gift basket for the Walton family, a circle of paper lanterns, flowers and a cooler to collect donations. Photo by Cole Trahan.

On Wednesday evening, the gym at Valley High School was filled with students, parents and others who had come to pay their respects to former VHS student Antavious “Bobo” Walton, who tragically passed away Saturday. Walton, 16, was killed after a gun being held by a 17-year-old discharged, according to a press release from the Valley Police Department.

Originally, plans were to hold the ceremony in the field behind the school, but it was raining lightly. In the center of the gym floor, students set up a memorial display with a wreath, a gift basket for the Walton family, a circle of paper lanterns, flowers and a cooler to collect donations.

“God, there is nothing easy, and there’s nothing good about this situation,” she said. “And we know that sometimes, that’s just how life is. Father God, we celebrate Bobo and what he meant to so many students.”

Ashley said that while Walton’s life was short, it was not meaningless.

“God, I know that he touched so many with his positivity, with his goofiness, with his ability to not hold a grudge,” she said.

Russell Smith, a friend of Walton, was the next to speak. He described Walton as his best friend.

“He helped me through so much stuff,” Smith said. “… He would always come up to the people who were sad and just be there for them… He was there for us to help this school and this community in any way he could,” he said.

Chandler Fullman, who coached Walton in football, said Walton would stop by his classroom three for four times a week, if not every day, to ask him how he was doing and talk about football. He described Walton as a happy person who always had a smile on his face.

“He had a huge heart,” he said. “A very loving nature and extremely friendly young man. I taught summer school this summer, and he was in a few of my summer school classes. And I kept asking him to sit down, do your work, stop talking to your friends. And I was like, ‘No wonder you’re in summer school. It’s not because you’re dumb.’ It’s because I couldn’t get him to sit down and be quiet. That’s just who he was. He was the friendliest guy in the room, always. Never a dull moment with Bobo.”

Fullman said Walton was a defensive lineman in football, but he wanted to be a running back.

“I really truly believe that Coach Ford would have let him have a chance, and he would have probably been a running back this year, because that’s just who he was,” he said. “He was determined.”

Fullman said there were three things he wanted people to remember about Walton. One was his loving, joking nature. Another was his friendliness. The third was how Walton had plans to dominate the football field this upcoming season.

“I’m really heartbroken, really sad because he’s not going to get that chance,” Fullman said. “But I know that he is up in heaven, running on the fields of gold, scoring touchdowns all over the place.”

Sheba Huguley, Walton’s next-door neighbor, said Walton and his family were like family to her. She said Walton was a blessing to everyone present.

Walton’s cousin, who didn’t share her name, said that not only her family, but everyone present lost someone.

“But in the midst of all of this, let’s not lose ourselves,” she said. “He was loved by many, and I see plenty. If you did or did or didn’t get a chance to tell him that you loved him, look around, and you tell that person next to you that you love them because you never know.”

She encouraged football players or those who wanted to play football to pursue their dreams, as that’s what Walton would want them to do. She thanked those in attendance for their support and told them she loved them all.

Ashley, the youth pastor, encouraged those in attendance to gather into small groups to talk about Walton.

After people talked for a while in groups, Fullman led everyone in another prayer, after which they went outside to light candles and set off sky lanterns.