Rev. Reese and Rev. Davis honored for their part in abolishing at-large voting 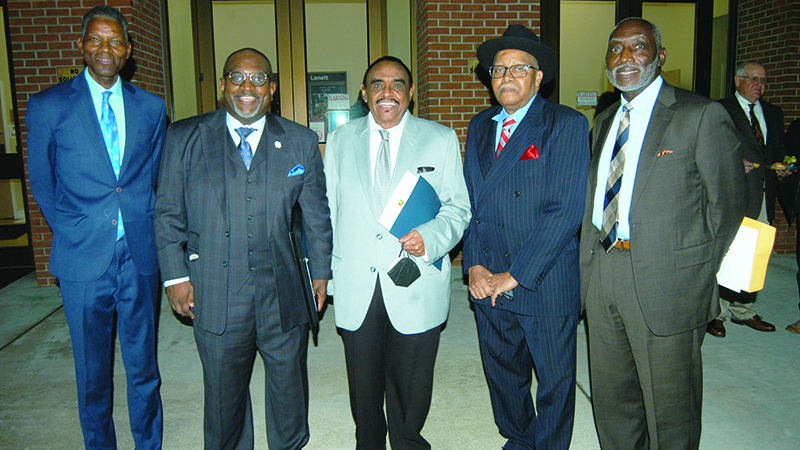 Good trouble: Reverends Frederick Davis (second from left) and Cornelius Reese (second from right) were honored by the Lanett City Council on Monday. They played key roles in having at-large voting changed to district voting in the 1980s. Also pictured are Lanett City Council member Tony Malone on the far left, Chambers County Commissioner Charlie Williams in the center and Lanett Mayor Jamie Heard on the far right. Photo by Wayne Clark.

LANETT — Two ministers who played key roles in ensuring diversity in elective officers in Chambers County were recognized with proclamation presentations at the Monday meetings of the Chambers County Commission and Lanett City Council. The Rev. Cornelius Reese of LaFayette and the Rev. Frederick Davis of Durham, North Carolina and formerly of Lanett were recognized for their role in abolishing at-large in favor of district voting.

Under the at-large method, no Black individual had ever been elected to a public office in Chambers County. District voting allowed for the creation of minority safe districts, which give Black candidates a better chance to be elected. These districts have approximately 60 percent Black population. Such districts for the Chambers County Commission and for the city councils in the cities of Lanett, Valley and LaFayette have allowed for continuous Black representation on these public bodies since the new rules went into effect in 1988.

Acting on the Rev. Reese’s behalf, the Southern Poverty Law Center in Montgomery filed suit against Chambers County and its cities, seeking the creation of districts instead of having traditional at-large voting.

In accepting a framed proclamation and a key to the city from the Lanett council on Monday, Reese said that this had not been an easy process. For the action to take place back in 1986, three people had to sign the legal brief. Reese readily signed it, but there was great reluctance for anyone else to sign.

“It was rally hard to find two other people to sign,” he said. “It was like looking for a needle in a haystack. I’m the sort of person who has never been afraid of anything, but a lot of other people were afraid of putting their name to something like this.”

It took some looking, but Reese did find two other Chambers County residents who would sign — the Rev. Frederick Davis and Jannie Huguley.

Reese was pastor of the St. John Baptist Church on Cherry Drive in Lanett, and Huguley was much revered for the way she had taken in children and raised them throughout her adult life.

The creation of a system based on district representation had the immediate effect of Black leaders being elected to the county commission, city councils and local school boards.

Davis said he would never forget Lanett and the happy times he and his young wife had there. He said he’d always remember talking to his neighbor, Johnny Stiggers, and learning a lot from him.

“He taught me lessons about politics,” he said. “He told me you have to have tree shakers before you can have jelly makers.”

It takes tree shakers like Reese, the Davis and Huguley to bring about change.

“Those who get elected are the jelly makers,” he said. “We have a number of them here tonight.”

“Lanett, Alabama will always be special to me,” Davis said. “It was where I got my start. I still write about the strengths I found in this city. Times can be tough, but tough people make it through.”

A proclamation approved earlier in the day by the Chambers County Commission was read aloud by Commissioner Charlie Williams at the Lanett meeting.

Williams said he had met Reese for the first time many years ago.

“My little brother was playing youth baseball at the time for Coach (Arthur) Dunn,” he said.

“Rev. Davis and Rev. Reese utilized the Civil Rights Act and the Voting Rights Act to litigate legislation that resulted in the abolition of at-large voting and the creation of voting districts in the cities throughout Chambers County and the county itself,” the proclamation reads.

“I stand on the shoulders of a lot of people, including you,” she said.

Council Member Angelia Thomas thanked the two men for all the hard work they did.

“I want to thank these two men and the late Jannie Huguley, God rest her soul, for what they did,” said Council Member Tifton Dobbs. “I want to thank you, too, Mayor Heard, for the job you have been doing.”