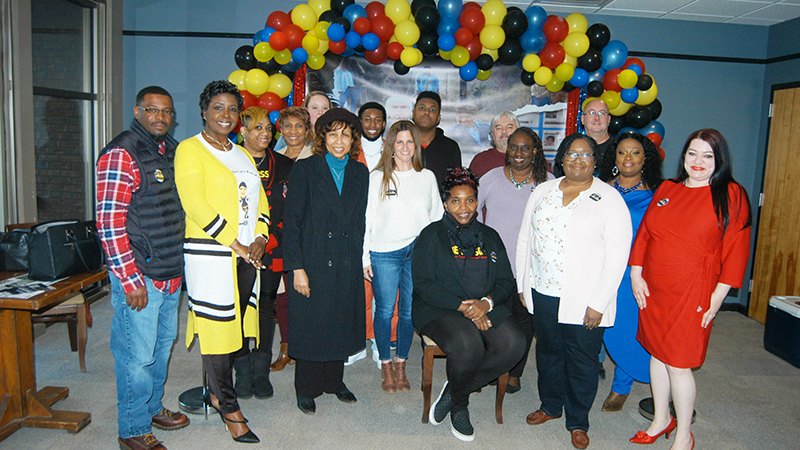 Film premiere: “The Missing,” a movie that was filmed in the local area, premiered Saturday afternoon at The New Horizon Theatre in downtown West Point. It was produced and directed by Lanett native Sharon “Lady Storem” Acres (seated). A good many local people had parts in the movie. Some of them are shown above. In front, from left, are Corey Ross, April Ross, Renata Buckner, Merilyn Vines, Stephanie Piper, Travena Hodo, Monica Barber, Valerie Billingsley and Karla Sanford. In back, from left to right, are Shirleye Greenwood, Tiffany Gardner, Darian Howell, Braxton Culwell, Terry Newill and David Stanley. Photo by Wayne Clark.

WEST POINT — “The Missing,” short film produced by Sharon “Lady Storem” Acres, premiered Saturday afternoon at The New Horizon Theatre. The film was shot on location in the Valley area and featured many local adult and youth actors. The film deals with human trafficking and was shown multiple times to appreciative audiences.

The movie makes a statement that the trafficking of youth can take place anywhere.

“The next victim could be someone in your family,” said Shirleye Greenwood, who appeared in the film. “I am so thankful that Sharon Acres has gone the extra mile in doing this, and I am glad I had the opportunity to participate in it. This is a message that needs to be spread.”

The movie begins with a woman placing a flyer on a utility pole. On it is a photo of her teenage niece and word that she has been missing from her family for several months. The flyer pleads for anyone who may have seen the young girl in recent days to immediately contact the police her family.

The aunt goes to a shopping area and approaches people leaving stores to ask them if they may have seen the young girl shown on the flyer. Unfortunately, most people are indifferent either because they are in a hurry or just don’t want to be bothered. While she is all but begging people to pay attention to her because someone’s life could be at stake, the movie then flashes back to how the young girl was alone in a park one afternoon when approached from the back by a menacing figure of a man wearing a heavy coat, gloves and whose head was hooded. He places handcuffs on the unsuspecting girl, forces her into a van and drives off with her. She’s now a victim of being kidnapped by a monster and under his complete control.

The incident took place in a public park. Anyone who might have seen it should know it wasn’t right and should have reported it. That situation points to the movie’s theme: “If you see something, report something.”

The hooded monster grunts and breathes hard when relaying demands by phone. He manages to kidnap three more young girls to have a total of four under his control. The community becomes outraged and people want answers. They are getting a runaround from a police detective heading up the investigation. Frustrated by a lack of answers., family members go to court and ask a judge why no progress is being made to find the missing girls.

“Is the police doing anything to help us?” the aunt asks.

The judge assures them they are doing all they can.

“The officers are doing their jobs!” the judge says. “We have added more officers to patrols.”

The body of the first kidnapped girl turns up on a street corner in the fictional town of Bethel.

The family members go back to court and start chanting “Save the missing! Save the missing!…” while the judge pounds her gavel demanding silence. A woman in the back stands up and shouts, “If you see something, say something!” The people in the courtroom applaud and cheer that remark.

Some good cops working behind the detective’s back find out that the hooded monster is actually the brother of the detective, and that he’s been protecting him.

Justice comes to them in a forceful way. This frees the three remaining kidnapped girls, and in the movie’s most heartwarming moment they run to their families for a tearful reunion in their mothers’ arms.

“If you see something say something” appears in bold letters in the closing credits. There’s also the number of the National Human Trafficking Hotline: 1-888-373-7888.

Making live reports throughout the movie was April Ross of Bee TV. At the end of the showing she presented Sharon Acres with a dozen red roses and thanked her for producing and directing the film.

“She is so talented,” she said to the audience inside the theater. “She did an excellent job with this. I am so glad you brought this to our area and featured many people from our hometown.”

Monica Barber, community development specialist with the City of West Point, played a part in the movie. She thanked Acres on doing the movie in the local area.

“Don’t think this can’t happen here,” she said. “It can happen anywhere. Be mindful of everyone’s behavior.”

Adrian Carpenter of the Chambers County Circle of Care Center for Families talked to the audience after the showing. He thanked Acres for addressing human trafficking in a movie. He urged people to be alert and to be eyes and ears for children.

“Look for things that don’t look right,” he said. “Tell the police what you see. I’m excited about this movie because it puts this issue on the radar. I thank everyone who made this movie possible. Human trafficking is a difficult subject, but it’s something that needs to be talked about.”