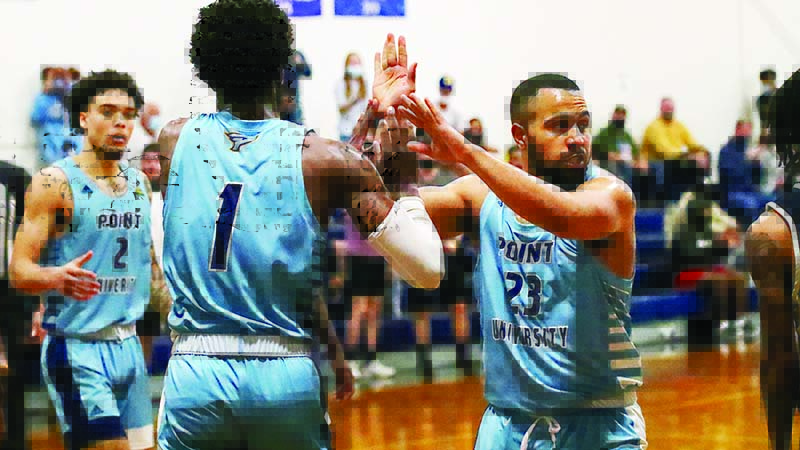 Thriller: The Point Skyhawks men’s team celebrates after defeating Trent McConnell Thursday. The Skyhawks travel to Kentucky Christian University on Monday, Feb. 14, for its final AAC road game of the season. Tipoff is scheduled for 6 p.m. Photo by Roman Jones.

WEST POINT  – The Point University men’s basketball team opened Thursday night’s Appalachian Athletic Conference matchup with Truett McConnell, trailing 13-1, but a team effort by the Skyhawks brought them within four to close the first half out, and on to victory in the second half as Point defeated the Bears 72-69.

With less than eight minutes remaining in the opening half, a jump shot from Lorenzo Freeman Jr. would put the Skyhawks down by one, and nearly three minutes later, two free throws from Ray Reeves would tie the score at 29, putting the Skyhawks back in the game following the early deficit. A 3-pointer from Freeman would earn Point’s first lead of the night with 4:41 left, but the Bears would close the half out on a 9-2 run to go ahead 38-34 at the break.

The Bears quickly extended their lead to double digits to open the second half, but a 3-pointer followed by a jump shot from Reeves would spark a 10-1 run for Point to bring the score within one (57-56). Truett would work their lead back out to as many as four over the next four minutes of play, but with 2:30 remaining, a free throw from Reeves, followed by a jump shot from Tommy Carter, would put the Skyhawks ahead 68-67. Another layup from Carter with less than a minute left would help Point’s lead extend out to three. Two free throws from TMU’s Brent Kelly with 11 seconds left would bring the score back within one, but a trip to the free throw line for RJ Selman would help the Skyhawks retake their three-point lead and go on to victory.

Bowen led all-scorers with 24 points and posted 11 boards. Reeves and Freeman both followed with 17 points apiece.

Up next, the Skyhawks travel to Kentucky Christian University on Monday, Feb. 14, for its final AAC road game of the season. Tipoff is scheduled for 6 p.m.

The Point University women’s basketball team entered the final quarter trailing 56-55, but two 3-pointers from senior Nicole Izuagie late in the game would help the Skyhawks close the game on a 12-0 run to defeat Truett McConnell 74-67 Thursday night inside West Point Park Gymnasium.

“Tonight’s win was a great team defensive effort,” Head Coach Tory Wooley said. “Shey (Owens) dominated the glass, and our guards were superb tonight. We hit big shot after big shot. Marta Gimenez’s play was great, and she set the tone early. Marta and Hannah Williams are a great special backcourt duo. Iyanna (McMillan) played great and Jasmine (Griggs) provided great defense on their leading scorer. It was Nicole Izuagie’s shot-making ability that got us over the hump. For the past four years, she has come through time and time again and her teammates do a great job of getting her the ball. We have a tough road trip ahead of us as we look to get back to our winning ways on the road.”

In the first quarter, Point took an 18-13 lead at the end of the period, with back-to-back 3-pointers from McMillan fueling Point’s offense with under five minutes remaining. Truett’s Re’Tavia Floyd connected for seven free throws in the second quarter to help the Bears take a 37-36 lead, but a layup from Hannah Williams would give Point a 38-37 advantage entering the second half.

With 2:45 remaining in the third quarter, the Skyhawks led 55-49, but the Bears closed the period out on a 7-0 run to go ahead 56-55 entering the final frame. The Bears worked their lead out to six following back-to-back layups from Quan Holton, but a 3-pointer from Izuagie would cut TMU’s lead back down to three (63-60). Back-to-back free throws from Holton would give the Bears a five-point lead with 5:18 left in the game, back that would be all the scoring Point would allow from the Bears, as Izuagie followed with two 3-pointers, and Williams and Marta Gimenez would combine for six free throws to help secure the victory for Point.

Up next, Point travels to Columbia College on Saturday, Feb. 12, for its second to last Appalachian Athletic Conference road game of the season. Game time is scheduled for 2 p.m. Following Saturday’s game, Point travels to Kentucky Christian University on Feb. 14 before returning home to host Milligan on Feb. 16 and Tennessee Wesleyan on Feb. 19. The Skyhawks will then turn their attention to the AAC tournament.

Lanett takes down LaFayette to claim the Region 2A…