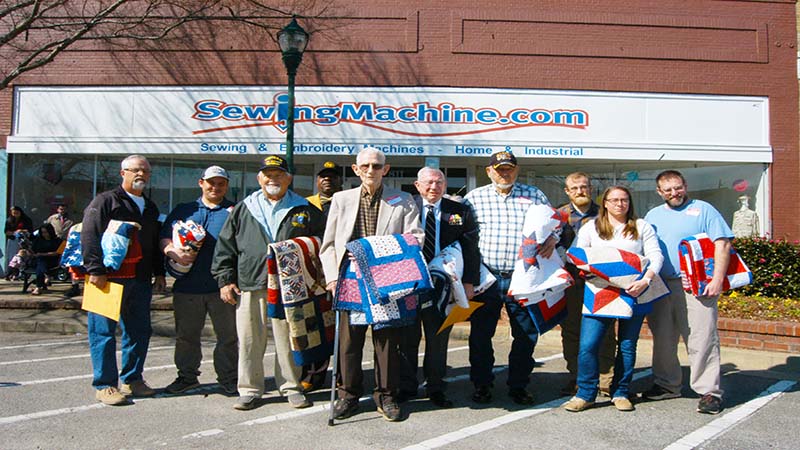 WEST POINT — A 95-year-old World War II veteran was among ten former service members honored by the Georgia-Alabama Chapter of the Quilts of Valor on Saturday morning. The ceremony took place inside sewingmachine.com in downtown West Point.

Except for the three-and-a-half years he was in U.S. Navy, Sidney Lanier has spent his entire life in LaGrange. He was born and had grown up there on the day he joined the Navy on April 4, 1944 — which was also the day he turned 17. As a teenage member of the armed forces, he was trained in how to assist amphibious landings. He was part of the U.S. advance across the Pacific toward Japan and was on Okinawa when the war ended in 1945. He and many other service members were greatly relieved when the war ended with the dawning of the atomic age. Japan surrendered only after two of its, cities, Hiroshima and Nagasaki, were destroyed by atomic bombs.

It was estimated that the U.S. might have up to one million casualties if the large Japanese islands had to be taken one by one.

Mr. Lanier is proud to have served his country during wartime.

“If I had to do it all over again, I would,” he told an overflow crowd that witnessed the Saturday ceremony.

Sandell is originally from Seattle, Washington.

“I married an Alabama girl and have been here ever since,” he explained.

“I want to thank the quilters for honoring us today, and for what you do in honoring others who have served,” he said.

Ledbetter is the son of West Point Council Member and pastor of the West Point Presbyterian Church Gerry Ledbetter. He was in the U.S. Army from 2008 to 2012 and served in Iraq and Afghanistan.

“There are two groups of veterans we especially want to honor,” said Quilts of Valor spokesperson Sheila Simpson. “We want to honor World War II veterans because there are so few of them still living, and we want to honor those who served in Vietnam because they weren’t treated right when they came back home.”

“This is the most welcoming event I have been invited to since I came back home in 1966,” Roper said. “I am glad I served my country when called on.”

Lighty is a native of Darlington, South Carolina and was in the Army from 1983 to 2012. He was stationed in Saudi Arabia, Iraq and Afghanistan. He thanked family members and members of his church family, Macedonia Baptist of LaGrange, for coming out and supporting him during the presentation.

“Twenty-seven years of active duty was a life-changing experience for me.” he said. “I lost friends in Afghanistan and Iraq. My hat is off to you ladies for what you do in honoring those who have served.”

Carson was president of his senior class at Lanett High in 1953. Millard Fuller was one of his classmates. He went on to earn a degree in aeronautical engineering from Auburn University. He joined the Navy after college and was commissioned as an ensign. He served during the Vietnam War and received a number of decorations including the Bronze Star. He retired from the Navy in 1985 with the rank of captain.

Carson thanked the quilters for what they are doing for veterans and active-duty personnel.

“When I look at these quilters, I see sisters, mothers and grandmothers who sent their loved ones into service,” he said. “They are as patriotic as those who have served.”

Homer Harris was in the U.S. Navy for four years during the Vietnam War. He was a machinist mate aboard the flagship USS Pocono.

“You can see how we have aged,” he told the crowd. “Now, you know the rest of the story.”

“We really appreciate this honor,” Matthew said. “Thank you for these quilts.”

West Point Mayor Steve Tramell thanked everyone for turning out for Saturday’s program.

“I want to thank you all for being here today,” he said. “These quilt presentations give us an opportunity to thank you men and women who have served our country. We have the freedoms we enjoy because of you. I also want to thank the quilters for what you do.”

“We want to thank each one of you for your service to our country,” Simpson said. “We appreciate you being here in West Point this morning.”

The ceremony began with the playing of a recorded version of a well-known song for each branch of service – “The Caissons Go Rolling Along” for the Army, “Anchors Aweigh” for the Navy, “Semper Paratus: We’re Always Ready for the Calm” for the U.S. Coast Guard, “Off We Go Into the Wild, Blue Yonder” for the Air Force and “The Marine Corps Hymn” for the U.S. Marines.

The Quilts of Valor was founded in 2003 by Catherine Roberts. At the time, her son had been deployed to the Iraq War. She was constantly worried for his safety and one night had a dream of a post-deployment warrior sitting on the side of his bed and struggling with his war demons. As the dream continued, she saw him wrapped in a comfort quilt and in a state of hope and well-being.

It took Roberts’ small group some three years to make and award 100 quilts but as word spread about what they were doing, chapters started organizing all over the U.S. In May 2014, the 100,000th quilt was presented. Since then, the number of presentations in the U.S. has surged past the 290,000 mark.