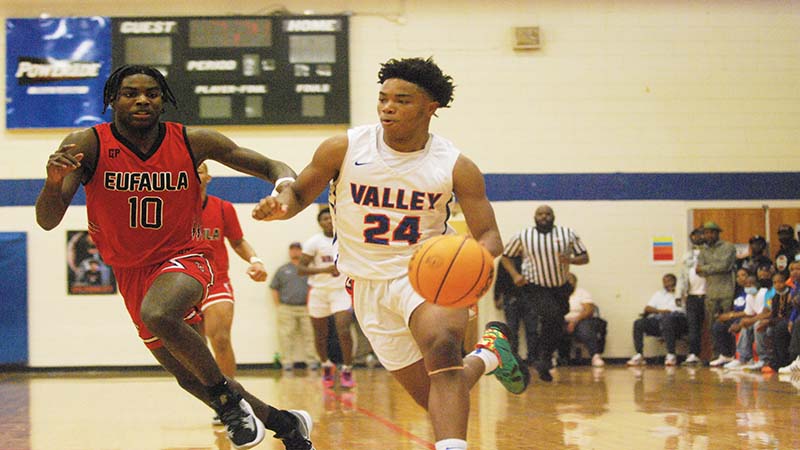 The Valley Rams boys basketball team fell short of capturing the 6A Area 4 championship, falling to the Eufaula Tigers 82-50 on Thursday.

Going into Thursday, the Rams had the best regular season area record with only one loss on the road against Eufaula, but the Tigers bested them again.

There was not an open seat in the house; many fans had to sit or stand under the goals. The energy was electric as both sets of fans threw barbs across the court at each other.

On the court, Eufaula got off to a hot start and took a lead 22-15 lead after the first quarter. The hometown Rams fought hard but were outmatched early.

Eufaula started the second quarter on an 8-0 run to stretch its lead to double-digits. Valley followed with a 6-0 run .

Valley was down nine points at the half before cutting the lead down to six early in the third quarter. It only took a couple of minutes for Eufaula to regain a double-digit lead that they would not surrender the rest of the game. The Tigers switched to a full court press that frustrated the Rams offense.

The referees got chippy in the third quarter. No technical fouls were assessed, but the refs had a conference with all 10 players on the court.

This game had everything in the third quarter as a Eufaula player vomited on the court, which caused a temporary stoppage in play with 1:02 left in the quarter.

Eufaula took a 24-point lead to the fourth quarter, limiting any chance of a comeback for the Rams.

Despite the fact that the game was all but over, the Tigers dominated the fourth quarter as well by outscoring the Rams by eight in the quarter.

Valley will look to rebound in the sub-regional round of the playoffs Tuesday.