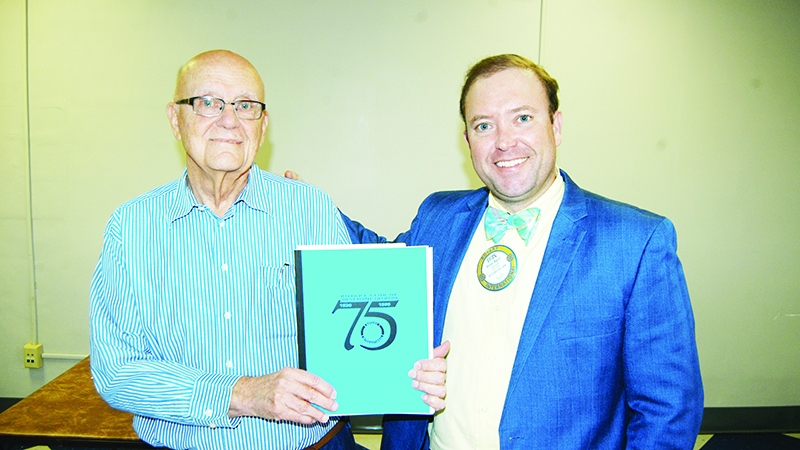 100 years of rotary: On Thursday, Edmund Glover (at left), a long-time member of the West Point Rotary Club, gave a brief review of Rotary’s impact in the local area since it was founded in 1920. At right is Brian Aplin, Rotary Club president. Photo by Wayne Clark.

WEST POINT — The West Point Rotary Club marked its 100th year as a civic organization on May 21, 2020. It wasn’t much of a celebration at that time, with much of the country in isolation due to the COVID-19 pandemic.

With the club now approaching anniversary year 102, long-time club member Edmund Glover took a look back at the club’s first century at Thursday’s noon hour meeting. He gathered the information for the program through past issues of The Yarn Spinner (a club newsletter) and a historical sketch prepared by Bill Stephenson Jr. to mark the 36th anniversary of the club in 1955.

The West Point Rotary Club had good participation from adult men in West Point and the Valley area in its early days. It was not unusual for memberships to approach the 100 mark, more than what was needed to have multiple community projects simultaneously.

In 1950, the club helped pay the expenses incurred by a Korean student at LaGrange College. The young woman was in dire need of support at that time because the Korean War had cut off the financial support she had been getting from home.

During the spring of 1920, more than 125 Rotarians from the two-state area participated in the organization’s spring event. The principal address was given by Bill McDowell, a member of the sponsoring club in Opelika. Albert S. Adams, president of Rotary International, was in attendance. District Governor Truman L. McGill presented the charter for the West Point Club.

The ceremony took place at the West Point Athletic Club and was preceded by a barbecue supper.

The first weekly meetings took place at the Charles Hotel in downtown West Point. It later became known as the General Tyler Hotel and was owned by the A&WP Railroad. Rail travelers often spent the night there. Some had a hard time falling asleep because of the busy train traffic outside the hotel.

“There’s an old story of one man who couldn’t get to sleep and called downstairs to complain,” Glover said. “He asked, ‘When will this hotel get to Atlanta?’”

The local office for South State Bank is located where those hotels once stood.

Club meetings also took place at Shawmut Cafeteria, the same building where the Chambers County Circle of Care Center for Families was located in recent years.

Membership and club projects grew over the years. In 1978, West Point Rotary had 93 active members. All were men (breaking the gender barrier would come later), and the average age was 43. Fifty-seven of the members lived in West Point, 27 in Lanett, with the remaining members being from Shawmut, Langdale, Fairfax and River View.

Some members during the club’s early years were extraordinarily dedicated. Grady Bradshaw (for whom a local library is named) was the club secretary from 1929 to 1943 and from 1949-69. He served as the club president during the gap years.

Dr. Hugh McCulloh was a dedicated member. There’s an often-told story of him coming to a meeting in an ambulance one week. He was wheeled into the meeting room on a gurney. Doing this allowed him to keep a consecutive meeting streak going. That streak eventually reached 51 years. Jack Keith would later break that record.