WHAT A SEASON: Lanett girls fall to Pisgah in AA semifinals 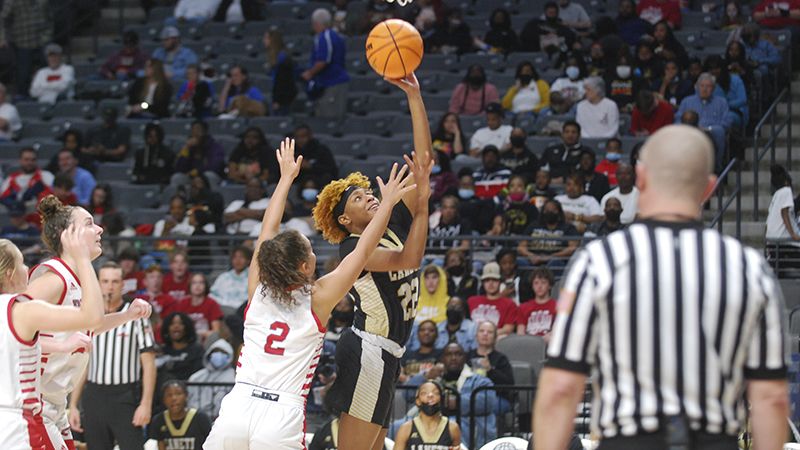 “When the season ends, you never want it to end,” head coach Charlie Williams said. “It’s really emotional, the locker room is a very tight group; they love each other very much.”

The Eagles got off to a 14-0 run to start the game as the Panthers were slow out of the blocks on both ends. Breanna Glaze scored the Panthers first basket almost five minutes into the quarter. The Eagles promptly answered with a 6-0 to take a commanding 20-2 lead. The Panthers shot a paltry 23.1% from the field in the first quarter.

“That’s the standard for AA basketball,” Williams said of Pisgah. “That’s what we’re striving for.”

Glaze scored the first basket of the second quarter, but the Panthers could not cut the lead down in the quarter. The Eagles gained their first 20-point lead with 4:30 left to go in the first half. Ameria Zeigler got into foul trouble when she picked up her third foul with 2:50 left to go in the half and was sent to the bench to save her from picking up her fourth.

MaKiah White was the focal point on offense for the Panthers as she racked up 12 points on 5-for-6 shooting in the first half. White finished with 14 points and grabbed 10 points for a double-double.

Glaze hit a basket to cut the lead to 14 with one minute left to play in the half. Pisgah answered with a 6-0 run to go up by 20 and lead by 18 going into the half. Both teams scored 20 points in the second quarter, but the poor start to the game doomed the Panthers. Lanett had a chance to cut into the lead, but only shot two of seven from the free throw line in the second quarter.

Breanna Glaze hit a three-pointer to start the fourth quarter and trim the lead to 11 — the closest the game has been since the early stages of the first quarter.

Breanna Glaze was helped off the court after going down and grabbing her ankle. Her injury would be a huge loss for the Panthers as she did not return. She was the Panthers second leading scorer in the game with 12 points.

“This is my only senior right here, I raised her,” Williams said.

This turned out to be Glaze’s final game as a Panther.

“Lanett is family,” Glaze said with tears in her eyes.

The Panthers were able to cut the lead down to eight with five minutes left in the game, but that was the closest the game got late.

Zeigler got in foul trouble early and fouled out of the game late in the fourth quarter. The Eagles comfortably closed the game out with the Panthers season coming to a heartbreaking conclusion.

“You’re never happy when you lose, but I’m happy with the effort the girls gave tonight,” Williams said.