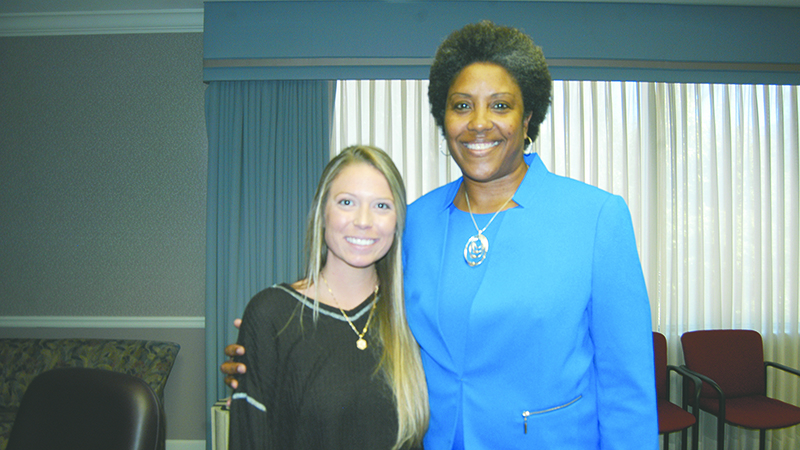 White grew up in Lawrence, Kansas, where her dad was a track and field coach at the University of Kansas. Her dad was originally from Birmingham and was a track star at Jefferson State Community College before moving on to UK. In the 1970s, he was an alternate for the U.S. Olympic team and became very good friends with Olympic gold medalist Harvey Glance.

The family moved around a lot during her growing up years. Her dad was a track coach, and they spent time in places like Charlottesville, Virginia and Knoxville, Tennessee. “The first college football game I ever went to was in Knoxville,” she said. “I still remember all the words to ‘Rocky Top.’”

“I have lots of relatives in Alabama who were either athletes or in health care,” she said. “My mom became a P.E. teacher, and I have a lot of aunts who are nurses.”

White is well over six feet in height, and when people see her they ask her if she had been a basketball star.

Of course, her dominant sport in high school and college wasn’t gymnastics, but it wasn’t basketball either. In high school in Kansas, she was a highly recruited volleyball player. When it became time for her to pick a college, she could have stayed home and been a Lady Jayhawk, but she chose to go back to her roots in Alabama to Auburn University.

“I was near family in Alabama and I had that at Auburn,” she said.

Jaunelle majored in athletic administration and met and married Marcus White, who was then a 6-foot-4, 300 pound defensive lineman on the Auburn football team. He had a shortened career due to a knee injury.

“I thought about working for a Fortune 500 company after graduation. but one of my professors told me I probably wouldn’t be making as much money as I’d like when starting out,” White said.

She stayed in college to earn a master’s degree and got a job in the athletics department at LSU.

She worked closely with coaches like Nick Saban, Kirby Smart and Jimbo Fisher, all of whom were on the football staff at that time.

The Whites traveled around a good bit in the succeeding years. They were at Murray State (where Marcus earned a degree), South Alabama, Texas Southern and Alabama State before Jaunelle got the opportunity to be the athletic director for Point.

“I am delighted to be here,” she said. “People asked me if I was sure about moving to a small town like Lanett, Alabama, but we love it here. It’s different being at an NAIA school, but I’m excited about what Point University offers. We have approximately 430 student athletes on scholarships in 19 different sports.”

Very few of them are on what’s commonly called full rides, but they are having their education paid for in a variety of ways. The Point students who are from Georgia can receive Hope Scholarship money funded by the Georgia Lottery.

White said she had never seen a lacrosse match until coming to Point.

“I got so excited while watching the action I thought I was going to have a heart attack,” she said.

She’s hoping there will come a time when we are Covid free.

“I don’t think we know what normal is anymore,” she said, “but I do hope we get back to a sense of normalcy. I know we are moving in the right direction at Point University. We can do great things here. We have some things in the works to get the local community more involved.”

The school band, the Marching Skyhawks, began in 2015 and has done a great job in boosting school spirit. In the short period of time, they have been organized they have already established a tradition of excellence and achievement and have made a name for themselves throughout Georgia.

Point is currently a member of the Appalachian Athletic Conference.

“Most of the member schools are to the north or east of us,” White said. “Some out-of-town trips are 11 hours one way.”

There’s a possibility of changing to a different conference. The Southern States Athletic Conference, for example, has a number of members that are closer to West Point, among them Faulkner University in Montgomery and Dalton State and Brewton-Parker in Georgia.

“We need to sit down and think through what’s best for Point,” White said.

A majority of Point students live within easy walking distance of the J. Smith Lanier II Academic Center. Approximately 190 students are in a dorm on North 15th Street just across the state line in Lanett, 40 more reside above the dining hall and another 40 above the former CraftMaster building on West 3rd Avenue. Some more students are in the former Refuge Point Church building.

The main purpose of college life, said White, is for young people to go to a place where they can grow.

A member of the club asked White if the NCAA’s new Name, Image, Likeness (NIL) rule was affecting schools like Point. She said that was mostly a big-school issue for now, that it hadn’t trickled down to the smaller schools.

The rule was approved last summer by the Division 1 Board of Governors and allows athletes competing for NCAA Division 1, 2 and 3 to be compensated for their names, image and likenesses.