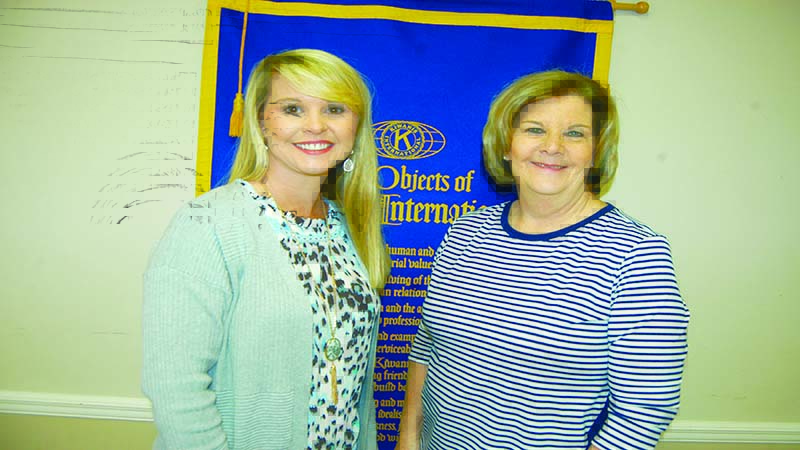 VALLEY — On Wednesday, the director of Alabama MENTOR spoke to the Kiwanis Club of Valley about the work she does in promoting foster care in the state. DeAnna Hand is a native of LaFayette but now spends much of her time at any one of MENTOR’s six district offices in Alabama. She stays quite busy but loves helping foster families build strong relationships.

Founded in 2005. Alabama MENTOR is a leading home and community based services provider, specializing in enabling therapeutic foster care and other services for youth of all ages with emotional, behavioral and other complex challenges.

“Through a range of personalized supports, we empower the individuals and families we serve to lead healthy, stable lives in the communities they call home,” Hand said.

Alabama MENTOR is headquartered in Montgomery and has offices in Birmingham, Mobile, Huntsville, Opelika and Florence.

DeAnna is the wife of Kevin Hand and daughter-in-law of the late Mike Hand, long-time owner and publisher of The LaFayette Sun.

“We moved back to LaFayette three years ago,” she said. “I’m glad Mike was able to see our children play in some ball games.”

Hand said she has seen some really difficult family situations in the kind of social work she does.

“I know about, and have seen, some really hard things,” she said, “but I want to give back and make a difference. I see it as a blessing that I have been able to do what I have done since being with Alabama MENTOR.”

She has been with the organization since 2010 and has at one time or another been in every county in the state working with one kind of domestic situation or another.

“We offer in-home services to help some parents keep their children out of foster care,” she said. “We want to make sure children have to go to foster care. There are over 6,000 children in Alabama who are in foster care, and there’s a shortage of foster parents right now.”

Hand said that children in foster care are there due to no fault of their own.

“We get referrals almost every day,” she said.

The Department of Human Resources (DHR) handles most placements into foster homes, but organizations such as Alabama MENTOR can be very helpful in seeing that kids in foster care are in the best homes that can be found.

Hand said that foster families are in all 67 Alabama counties. Some of the best foster parents are classroom teachers.

“There are some horror stories connected to foster care, but there are many, many more success stories,” Hand said.

She cited the example of a 15-year-old boy from Coosa County named Chance. He was being raised by a single mom who was not a bad person, but she was overwhelmed in trying to provide for him and to address his healthcare needs. Chance has some health issues and is confined to a wheelchair. He has to be fed through a tube and moved to different positions in the night when he’s resting. Alabama MENTOR was able to find him an ideal foster home in Coosa County. He still has a good relationship with his biological mother and gets along great with his foster parents, who have taken him to Alabama football games. He’s even got to meet Coach Nick Saban.

“Despite his health issues, Chance has a great sense of humor and loves to cut up with people,” Hand said.

Chance has blended in with a family that already had three children. He is on course to graduate from high school.

“Chance is an ideal example of what we do at Alabama MENTOR,” Hand said. “His birth mother could not afford to keep him up in the way that was needed, but she was able to stay in his life.”

Hand said that it’s fairly easy to find foster homes for babies and small children but much harder for teens. It’s not uncommon for teens who get placed in foster care to run away.

“They felt like their own parents had run away from them, so why not?” Hand said. “We prefer to keep children close to their biological parents.”

What’s really tough is to work with kids who have been physically or sexually abused. They been betrayed by an adult, and it’s hard for any other adult to gain their trust.

An Alabama Medicaid child can be in foster care until they are 21 years of age. A judge can release them from the program at age 18 if they have a job and can support themselves.

“Any child who has spent at least one day in foster care can have their college education paid for,” she said.

“Some are raising foster children with their own kids,” she said. “I wish everyone who had thought at some point or another of being a foster parent would do it,” she said. “We pay $30 a day for foster care. It’ not a moneymaking thing, but it does help you get by.”

There’s also some tax advantages that go with being a foster parent. “If they have been in your home for at least half a year, you can claim them as a dependent,” she said.

Hand said it’s heartbreaking to see what’s going on in Ukraine but that local people shouldn’t lose sight of the fact that there’s bad stuff going on in our own backyards, especially with those who are struggling with mental illness or substance abuse.

Hand said the her work with Alabama MENTOR was a calling but there’s much more work to be done.

“I have been blessed,” she said, “but I want to do more. There’s always more than needs to be done.”