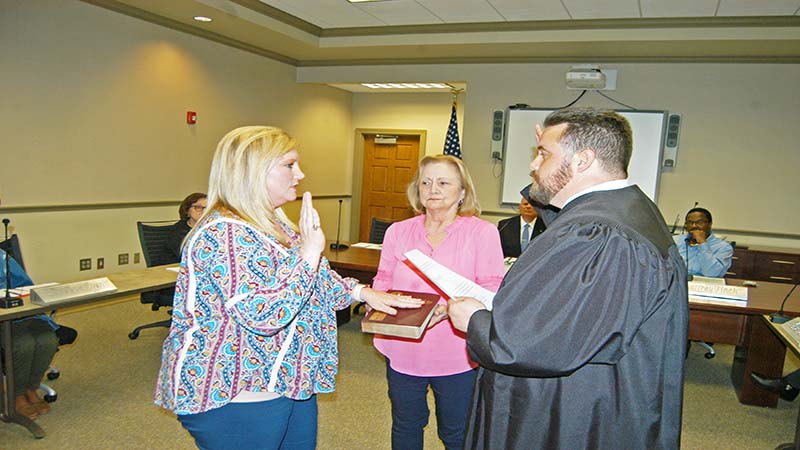 LaFAYETTE — In a called board meeting on Wednesday afternoon, the Chambers County Board of Education accepted the resignation of its long-time board president, Bill Martin, due to health reasons and named a successor to fill out the balance of his term.

“He was very dedicated to the children, parents and staff of the Chambers County School District,” said Superintendent Casey Chambley. “He had represented District 6 on the board since 1992. Since becoming superintendent, I had worked with him for only about one year, but I learned a lot from him. I asked him a lot of questions in that time, and he was always telling me not to worry and that we would make it through all right.”

The school district has seen its share of ups and downs during Martin’s tenure on the board. When he came on the board some three decades ago, the school district was experiencing some financial trouble and was going through school consolidation. There was also some belt-tightening moves during the 2008 recession. There have also been some high points with school construction and the advancement of technology in classrooms.

Board President Jeffery Finch said that resigning had been a tough move for Martin.

“He was not seeking re-election this year but wanted to complete his term,” he said. “He had been in the hospital recently and called to let me know that he wanted to be here today. He wanted to see it through. He wanted to give his constituents a good finish.”

Finch said he’d been a board member since 2006 and that Martin had been very helpful to him over that span.

After a long pause, Finch said in a wavering voice, “I’m not a doctor, but Bill is not doing good.” Finch then left the board meeting room for a few minutes to compose himself and then returned for the meeting.

The new board member is Jennifer Hunt. She was the only candidate to qualify for the seat to succeed Martin and had Martin’s support.

She was approved by the board in a unanimous vote. After being sworn in by Probate Judge Paul Story, she took her seat at the table.

Chambley said that he had approached Martin’s wife and asked her to fill out the remaining term.

“She didn’t think she would be able to do it,” he said. “They may have to move if Bill goes into rehab. She preferred to have Jennifer fill out the remaining term.”

He thanked Hunt for agreeing to step forward and to get into board service sooner than expected.

“Our prayers are with Mr. Martin and his family,” he said. “We wish him a return to full health. He is welcome to speak to the board when he feels up to it.”

Hunt is a resident of Valley’s Shawmut community. She’s a registered nurse and is the assistant administrator of EAMC-Lanier Nursing Home in Valley. She is a graduate of Valley High and has children in the Chambers County system.