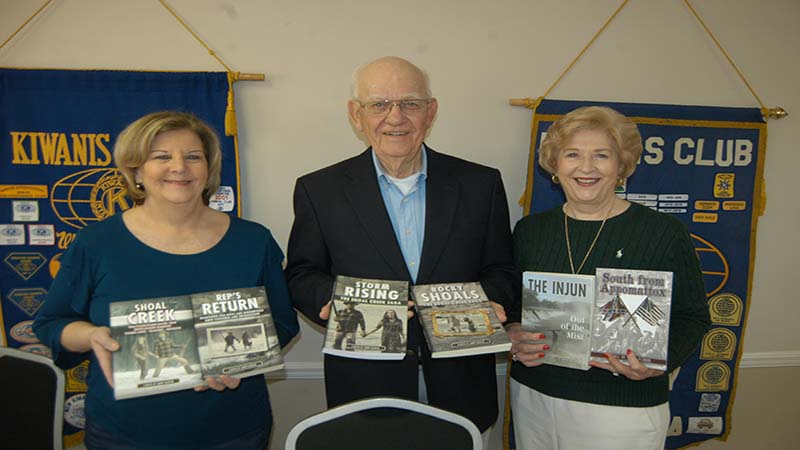 VALLEY — Lanny Bledsoe talked about having written six novels in less than two years at Wednesday’s noon hour meeting of the Kiwanis Club of Valley. He had copies of the four books in the Shoal Creek series, and his latest two works, “The Injun” and “South from Appomattox,” both of which have similarities and differences from the first four.

Writing is something he got into during the Covid-19 shutdown in the spring of 2020. “My wife, Karen and I were staying at home and no one, not even our grandchildren, visited us,” he said. “I got tired of watching television all the time and turned to writing to keep my mind alert and to pass the time.”

His first book, “Shoal Creek,” was loosely based on some stories he’d heard from older men while growing up in the River View community. Some of those stories were about men from River View paddling up the Chattahoochee River and coming ashore where Flat Shoals Creek flowed into the river. From there, they would walk along the creek bank to a farm some distance up the creek. The people who lived there grew corn and made moonshine whiskey. The men from the Alabama side would buy some of the home brew and have themselves a good old time before paddling back down the river. Sometimes they’d find more trouble than they bargained for.

Perhaps it was one such incident in 1915 when three men from River View came up missing. Their bodies were later found in the river with ropes tied around their necks.

It was a clear case of a triple murder, but no one was ever charged, much less convicted of wrongdoing. It has been widely believed over the years that it was a revenge killing from men on the Georgia side, who were enraged by the fact that one of the three Alabama men had shot and killed a Georgia man the previous year. That case did go to trial in Atlanta, and the man was found not guilty by way of self defense.

The four deaths were widely covered by The Atlanta Journal-Constitution and the Columbus Ledger-Enquirer at the time.

“Some of those people who lived across the river at that time weren’t the nicest people you could ever meet,” Bledsoe said.

“It has been an interesting journey,” he said. “Some women from our church have asked me how I learned some of the bad language that’s in the book. I told them I was in the U.S. Marine Corps for five-and-a-half years and have probably heard every cuss word ever invented.”

Bledsoe said that people are always coming up to him and offering their critiques on the book. Some swear up and down they remember the actual River View residents that are characters in the book.

“I always have to tell them that it’s a work of fiction and that it’s not based on real people,” he said. “It’s a compilation of many different people I’ve heard stories about.”

One man who called him spotted an error in “Shoal Creek.” Mention was made that people were picking cotton during the time of year dogwoods were in bloom. Dogwood trees always bloom in the spring, and cotton is picked in late summer or fall.

“He was right about that,” Bledsoe said, “but when you are writing fiction your facts don’t have to be right all the time.”

People have also asked Bledsoe how he could write about the strip clubs in Phenix City, something that’s in the Shoal Creek series. He said some racy stories had been told to him years ago by a River View man who played the bass fiddle in the house band at Ma Beachy’s Swing Club, a famed nightclub on the Alabama side of the river. It was pretty much an anything goes place during Phenix City’s wild days of the late 1940s and early 1950s.

“Floyd Williams didn’t do the kind of stuff that’s in the book, but he was a character and a lot of people remember that,” Bledsoe said.

Bledsoe has spent a lot of time behind a computer for the past two years, “I want to thank Karen for being patient and understanding when I am doing my writing,” he said. “At the end of the day, I get her to read what I have written. I sometimes do some rewriting when she tells me it’s too risqué.”

His latest book, “South from Appomattox,” is approximately 84,000 works in length. He’s already some 36,000 words into book number seven. It usually takes about four months to go to print. That means it will be out this summer. It’s set in the River Bluff of the 1950s. “Shoal Creek” was set in 1932-33, and the four books that followed were in the ensuing years.

South from Appomattox takes a jump back in time to the 1850s and 1860s. The memoirs of one of his ancestors, W.C. Bledsoe of LaFayette, influenced the writing of Civil War battle scenes. There’s also some local history during the Reconstruction period. Some local planters join together to start a textile mill at River Bluff, and lead character Coop Gill gets caught up in conflicts with carpetbaggers. These conflicts eventually lead to bloodshed.

Bledsoe will soon be autographing copies of his book at the Fairfax Village Antique Market. He will be there from 10 a.m. until 2 p.m. on Saturday, March 12.

Bledsoe owns some islands in the Chattahoochee River south of Langdale Dam. He has some deep concerns about what will happen to that stretch of river if Georgia Power removes three dams.

“It could ruin the fishing we have enjoyed for a long time, and there will be a big problem with erosion.” he said. “When they are generating power upstream at West Point Dam, the water rises fast. If you are fishing near the shoals and the river starts to rise, you’d better move to higher ground. There’s a lot of trees in the water where portions of the river bank have washed away due to the erosion. Two small islands have entirely washed away.”

Date set for Clean Up Valley