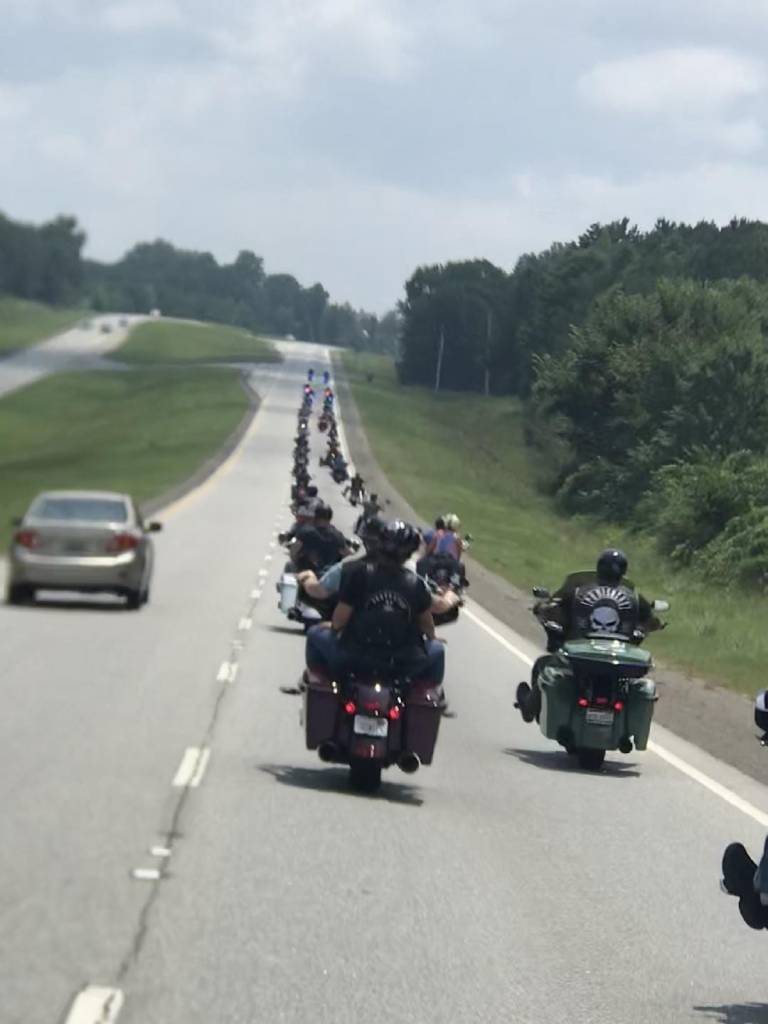 VALLEY — Last year’s first-ever Captain Jason Fuller Memorial Motorcycle Ride was an astounding success, drawing more than 700 riders and generating more than $83,000 in support of the Tallapoosa County Girls Ranch. A second annual memorial ride will roll out of King Auto Corner at high noon Saturday. Hundreds of riders in any kind of street-legal vehicle will be taking part.

Once again, it will be a powerful way of showing the respect and affection people over a wide area had for Captain Fuller and the strong support that’s out there for the Girls Ranch.

For those who aren’t participating in the massive convoy, it will be something fun to watch from the roadside.

Something new this year will be some stretch limos. They are being provided by Auburn Limousine and will be providing classy rides for all 19 girls who are presently living on the ranch and for Captain Fuller’s parents, Ray and Joann Fuller.

The event is being organized by two of Captain Fuller’s close friends, Howard and Candy Miles. They befriended Jason years ago when they were classmates at Temple Christian School in Valley. It was a friendship that grew stronger over the years. At one time, Howard worked with Jason in the Chambers County Sheriff’s Office. He was a handler for drug dogs Ivan and Ice. Howard is now recovering from a motorcycle accident he had last August while riding in another benefit ride. He had some unbelievably bad luck when a motorcycle tire blew out when he hit a rough patch of road.

He has improved a lot since then and just may participate in some way in Saturday’s ride.

The massive ride will pull out of King Auto Corner at noon and head across the Hennon King Memorial Bridge over I-85, heading through Huguley toward Highway 50, where it will take a right and head back to the junction of Highway 50 an Highway 29 across from Kroger in Lanett.

The ride will turn left and head to downtown West Point, which should be packed with people as it almost always is during the noon hour on a Saturday. The long line of vehicles will have law enforcement escorts all along the route and it should be a treat for shoppers and restaurant goers in the downtown area to watch the long line come through.

The route will continue north on the State Line Road past West Point Dam and Lake. The bikes will be taking a left at the stop sign on the Rocky Point Road and head past Veasey Creek Park and take a right onto the second portion of the State Line Road, over the Veasey Creek and Stroud Creek bays on the lake and come to a stop next to the Lakeside Marathon station on County Road 278.

The route then turns left and heads through the Standing Rock and Hickory Flat communities and comes to another stop in the Welch community on Highway 431.

There is one potential problem on this section of road. There’s a railroad crossing between Standing Rock and Hickory Flat. It’s a very busy CSX line, and some of the east-west piggyback trains are two-and-a-half miles long. The ride may have to take a break at this point if a train is passing through.

At Welch, the route takes a left and heads along 431 where it will pass through Ruth, Stroud, Standing Rock, Five Points, White Plains and Buffalo before reaching LaFayette. The long line of vehicles will go past the Chambers County Courthouse and the famed Joe Louis statue. They will be escorted through the busy Highway 50-Highway 431 intersection, past Chambers Academy and south to the campus of Southern Union State Community College in Opelika.

The route then heads through Opelika on Highway 29 and turns right on Highway 280 back to Tallapoosa County and the ranch.

There’s ideal weather in the forecast – fair skies and 68 degrees – should be perfect for a motorcycle ride.

There will be free food at the end of the ride and the fun of a silent auction and a live one.

“We have got some awesome items for the auctions,” Candy Miles said. “Our long-time friend Charlie Gray (a.k.a. Charlie Starr of Blackberry Smoke) has given us some autographed items.”

Gray is from Huguley and graduated from Valley High before going on to fame in Southern Rock.

“We have a magazine article where the writer asked him who he considered the best friend he ever had,” Miles said. “He said he was fortunate to have had a lot of good friends but if he had to single out one person it would be his childhood friend Jason Fuller. It was so good of him to say that.”

One really interesting item has been donated by country music star Jamey Johnson. He hand wrote the words to his 2008 hit “In Color” and put it an impressive-looking frame.

It’s all black and white, and it ain’t clear.

That’s me and Joe tryin’ to survive a cotton farm

in a Great Depression.

Like a couple of kids tryin’ to save each other.

You should have seen it in color.”

“In Color” was the 2008 Song of the Year by both the Country Music Association and the Academy of Country Music.

There’s some Oak Ridge Boys CDs signed by members of the famed group and eight passes to the Great Wolf Lodge in LaGrange.

“We have been working on getting this ride together for a long time,” Miles said. “We have been pleased by the response we have gotten. We are still trying to get the word out there about it. Registration will be starting at 9 a.m. at King Ford. We are looking for a great day on Saturday. We picked this date because it’s the anniversary of Captain Fuller’s death. We all still miss him, but we know he will be riding with us in spirit. We are so pleased to have his parents riding with us in a stretch limo. We love them like they were our own parents. We’re also excited to be giving the girls a fantastic ride in some stretch limos. We know they will have a lot of fun.”