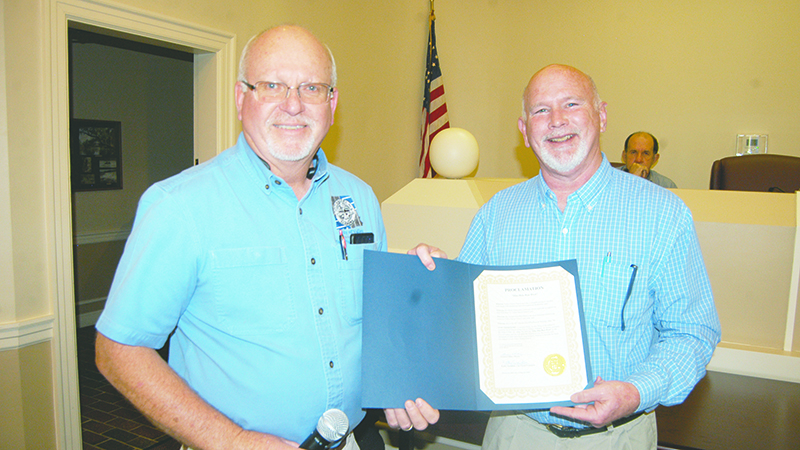 VALLEY — The City of Valley is looking to rezone four parcels of property. A public hearing will be taking place at city hall on Monday, April 25 to allow the public to offer positive or negative feedback on the proposed action before it goes to a council vote. The rezoning requests involve the following:

Planning & Development Director Travis Carter discussed the rezonings at the Monday meeting of the city council. He told council members that the city’s planning commission had been discussing these requests and that no opposition had surfaced.

“It’s now up to the council to have a public hearing on this,” he said.

Carter added that work was proceeding at the Camellia Crossing subdivision off Combs Road on the city’s west side. “Three houses have been framed up, and they may have rock on one of the new roads before the rain comes in on Wednesday,” he said.

Jon Boles and Adam Creel of Himmelwright, Huguley & Boles attended Monday’s meeting to report on the city’s audit for 2021.

“It’s a really good audit,” said Jon Boles. “It’s a little better than last year’s. There are no material weaknesses. It’s still not perfect, but we are trying to get there.”

Boles credited City Clerk/Treasurer Cathy Snowden and her staff on having done good work in keeping the city’s books in good order.

“Revenues are more than expenses, and that’s what you need,” he said. “There was a $6.7 million fund balance at the end of the year.”

The city might be wise, he said, to strengthen its cyber security.

“You are a big target,” he said. “It’s crazy how cities like Valley are being attacked this way.”

Mayor Leonard Riley told Boles and Creel that he was pleased they had the audit completed before this year’s tax filing deadline.

Blount reminded everyone that Clean Up Valley Day would be taking place on Saturday, April 23. Anyone who signs up by April 20 will get a free biscuit when they come to the Community Center for the 8 a.m. cleanup. Groups will be assigned streets where they can pick up roadside litter. Gloves and trash bags will be provided.

Blount said that the farmer’s market will resume in May and that more vendors are needed.

Council Member Jim Jones said he’s still getting lots of complaints from his constituents on the job being done by AmWaste in their weekly trash pickups.

“They are struggling,” said Travis Carter. “They are having to hire new people who have to learn the routes. I’m just not seeing the improvement we should expect. They know we are not happy with their service.”

Code Enforcement Officer Reid Riley discussed each one of these situations with the council and displayed on TVs in the council room photos of these sites. The site on Columbus Road has lots of trash piled up in the yard including household debris, old car parts, tires and all kinds of junk. It’s pretty much the same on the 23rd Boulevard site in Langdale. In addition to the household debris and old car parts, there are some electronic items such as discarded TVs and VCRs. Reid Riley said his office had gotten a plan of action to clean up the lot of 22nd Avenue but that he had not seen significant progress in doing that.

“There’s still a lot more than needs to be done,” he said.

The Gibson Street property was condemned some time ago and has been further damaged by a fire that has taken place since then.

“We need to move on this to help improve the neighborhood,” Reid Riley said.

Riley said the house on Johnson Lane does not look all that bad on the outside but has sagging floors and looks really bad on the inside.