City of Valley Tree Board gives away 400 trees 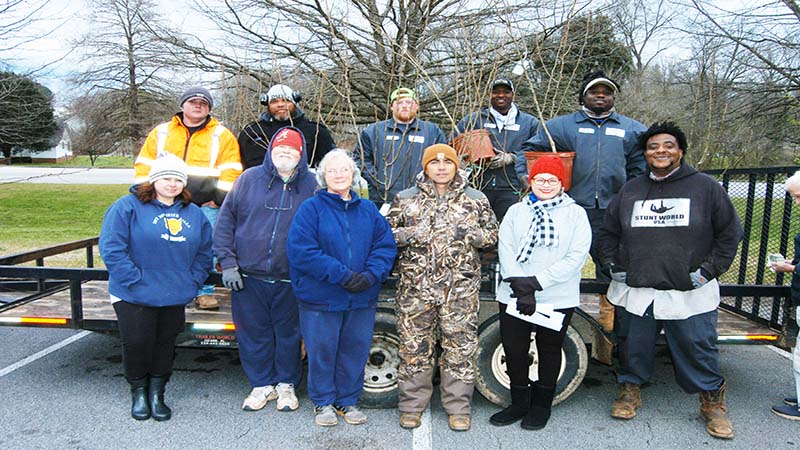 VALLEY — It was unusually cold and windy for a day in mid-March when the City of Valley Tree Board hosted their annual tree giveaway outside Valley City Hall this past Saturday morning, but it didn’t take long to distribute 400 young trees to Valley residents. The trees were provided by Ponder’s Nursery, and they were given out by Tree Board members and employees of the city’s Public Works Department.

Those who turned out were given the opportunity to plant a new peach, pear or crabapple tree. They could also choose an azalea bush.

A drawing was held to give away two larger trees. Charles Finley was the winner of the cherry tree and Jacob Letson won the tulip tree.

“It’s cold and windy this morning, but we are pleased with the turnout, given the conditions,” said Tree Board President Suzie Britt.

Valley is a Tree City U.S.A. member, and such giveaways are done in the spirit of Arbor Day.

The National Arbor Day Foundation is celebrating its 50th anniversary this year. Its continuing mission is to inspire people to plant, nurture and celebrate trees and what they mean to our world. The Arbor Day Foundation has over 1 million members and has planted more than 350 million trees in neighborhoods, communities, cities and forests throughout the world.

The Arbor Day tradition originated in Lincoln. Nebraska in 1872.