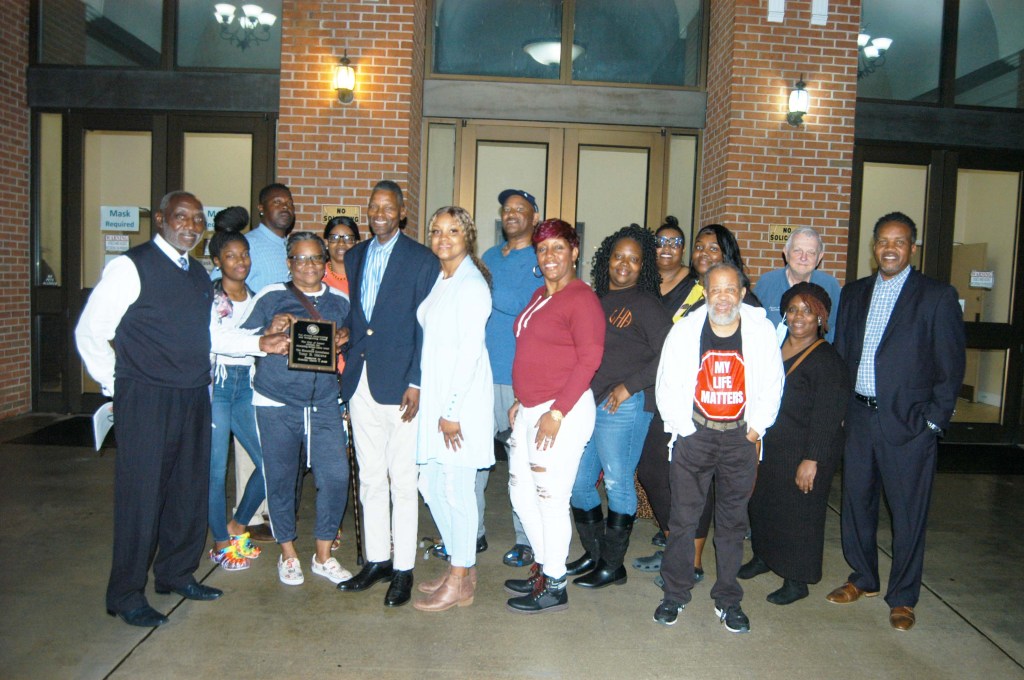 LANETT — The Lanett City Council had a work session prior to its 6 p.m. Monday meeting. As it concluded just before the regular meeting, Council Member Tony Malone was quite surprised to see lots of his family members filing into the council chamber to attend the regular meeting. He knew something was up and pretty much figured it out when he saw on the agenda that Mayor Jamie Heard was going to make a special presentation.

The mayor presented him a plaque commending him on his lengthy council service and for going out of his way to help many people in need over the years.

“When I got here in 1993, I learned that Tony Malone was the person to go to if you needed help in any way,” said Council Member Tifton Dobbs. “If you needed anything from a job to getting your car towed, he could help you. He has been instrumental in helping a lot of people in a lot of ways.”

Heard said Malone had been helpful in his getting the job at Central (now W.O. Lance) Elementary School. When the position came open due to a retirement in the 1990s, Malone said at a city council meeting it was time to consider hiring a Black person to the position.

“After hearing about that, I applied for the position and was hired,” Heard said.

He’d held an administrative position in the Chambers County School District at the time.

When it came his turn to speak, for once Malone was speechless.

“He’s never been that short,” joked the mayor. “You are always recognizing other people. We thought it was time we recognized you.”

In business at the Monday meeting, Council Member Angelia Thomas said the city was working to get the newly expanded airport up and running. Along with fellow council members Tifton Dobbs and Charles Looser, she is a member of a three-member committee that will recommend to the full council an individual to be hired as airport manager. This person will be responsible to day-to-day operations at the airport.

“We will definitely get this under way,” she said. “Ryan Pearce has been a great source of information for us.”

Pearce is a civil engineer for Goodwyn, Mills & Cawood in Montgomery and has served as a consultant on the project.

“This is a complicated process, and we thank the citizens for being patient with us on this,” Thomas said. “You will soon see planes taking off and landing at the Lanett Regional Airport.”

Utilities Superintendent Allen Summers told the council that his department has a plan to deal with a gas leak near the intersection of South 1st Avenue and South 4th Street near the old kindergarten building.

“We know what to do and are working on it,” he said.

Heard said he had been getting a lot of positive comments from citizens on the work being done in city departments.

“I want to thank the department heads for this,” he said. “We are a team and work well together.”