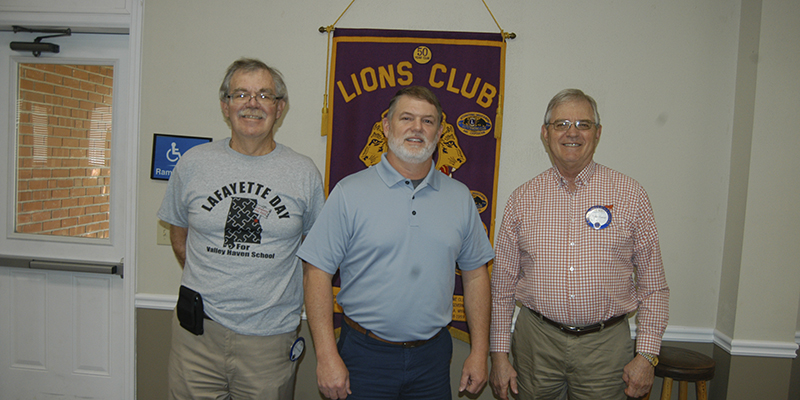 WEST POINT — Guest speaker Craig Brown talked to members of the West Point Lions Club on Wednesday about how things can change dramatically from one year to the next. Brown is the executive director of Valley Haven School and is very busy these days in talking about the Hike/Bike/Run fundraiser for Valley Haven.

“Things weren’t looking so good this time last year when I talked to you about the Hike/Bike/Run,” Brown said. “One of our members had died, and we had dropped from 74 to 13 members. We had a $183,000 deficit at the end of the year, and we were relieved that it wasn’t worse than that.”

Covid-19 was the main culprit for this massive setback. The year 2020 was the first year Valley Haven didn’t have a Hike/Bike/Run since its inaugural year in 1977. Many schools like Valley Haven closed. Fortunately, Valley Haven survived these rough times. The federal Paycheck Protection Program (PPP) was a big factor in this. PPP was designed to help small businesses survive. This was money to pay employees and overhead and could be fully forgiven if used as intended.

“The PPP money really helped,” Brown said. “When our guys aren’t there, we don’t get paid.”

Government funding is based on the number of people in the classroom every day. When the number drops to 13, there’s just not enough funding to keep a school open.

“I’m cautiously optimistic,” Brown said. “I see a bright future for Valley Haven School. If you talked to me in 2020, I wasn’t so sure. We just didn’t know. We do what we do because of the people we serve.”

The start of that brighter future came with the 2021 Hike/Bike/Run. Things didn’t look good at the outset with the cancellation of LaFayette Day for the second straight year, this time due to stormy weather. LaFayette Day has become a big part of Hike/Bike/Run. Not having it is a big blow to fundraising.

Even so, the community pulled together to make up for the loss.

In doing that under the circumstances, the corner was turned to a brighter future.

Brown admits there were many times in 2020 and 2021 he didn’t see how the school could make it. During those dark times, he would look at a picture of a young man he has on his office wall. His name was Kerry Kaff. He’s no longer with us, but he had a way of inspiring those who knew him.

“We do what we do because of people like him,” Brown said.

Kerry had Down Syndrome. He lived in a group home in LaFayette and loved going to Valley Haven every day. At one point, his health became precarious. Doctors gave him only three months to live, and it was recommended he no longer went to Valley Haven. “His sister told me they wanted to take him out of Valley Haven and that he didn’t like that,” Brown said. “I prayed over it, and asked God what to do. I told them I would help him even if it meant I had to stay with him all day.”

At the time, Kerry was in Brown’s home room and was in classes taught by other teachers for most of the day.

“He called me Daddy Roe, and I called him Buddy Roe,” he said.

“Kerry taught me more than I had ever learned in school,” Brown said. “He had the kind of unconditional love that’s written about in First Corinthians: faith, hope and love.”

Those who knew Kerry will never forget him.

“Sometimes when I’m having a bad day I look at my wall and see Kerry’s picture,” Brown said. “It reminds me of why I am here doing what I do.”

“I went to see him a few days before he died,” Brown said. “When I was with him, I knew the meaning of First Corinthians 13:13: “Love is patient. Love is kind. It does not envy. It does not boast. It is not proud. It is not rude. It is not self-seeking. It is not easily angered. It keeps no record of wrongs. Love does not delight in evil but rejoices with the truth.”

“People like Kerry are the reason we do what we do. I know I will meet him in heaven one day,” Brown said.

“I wish more people knew the kind of people we have at Valley Haven.”

Brown is hopeful there will be good weather for LaFayette Day and that a good turnout will be on hand.

“It will be a good way to get past this Covid thing and to celebrate something worthwhile,” he said. “We are really excited about this year’s Hike/Bike/Run and the future for Valley Haven School. We wouldn’t be where we are now without a lot of prayer. As bad as Covid was, we are still open. We are down only 20 people from full enrollment. I am so glad we have gotten though a tough time. It’s a blessing to have gotten through it.”

“We have had to turn down vendors in recent years because we didn’t have the space for them,” Brown said.

While the LaFayette Day was washed out last year, such donations helped out in a big way. Newman’s Farm Supply was very busy that day in mid-April, and a check from them really helped offset the loss.

“We are fortunate to live in a community that is so selfless and so giving,” Brown said. “People of our area give generously to worthy causes, and not just to the Hike/Bike/Run. This speaks well of the kind of people who call Chambers County and the Valley their home. We are looking forward to all the Hike/Bike/Run events this year. I am looking forward to see you at them.”

Teacher charged with abuse of a child under 18