Forever a champion, former Lanett Panther and participant in the first Super Bowl dies at age 81 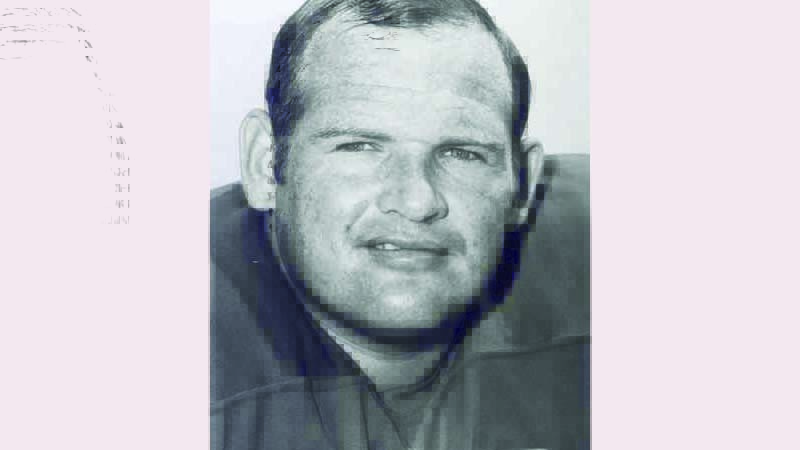 VALLEY— A local sports legend was laid to rest Saturday afternoon in Johnson-Brown Memorial Gardens. David “Dave” Hill passed away on Monday, March 14 at his home in Panama City Beach, Florida after a long battle with dementia. He was 81. Dave was buried next to his beloved wife of 58 years, the former Toni Medders of the Fairfax community, who died three years ago.

Hill was born and grew up in Lanett. He, his high school teammate Bobby Hunt and their coach, Mal Morgan, are members of the Alabama High School Sports Hall of Fame. All three played collegiately at Auburn. The mid to late 1950s was a great period for Lanett High athletics. Richard Wood, Jimmy Jones and Mailon Kent were other Panthers who would go on to play for Auburn and in the NFL. Dave Hill, Bobby Hunt, Richard Wood, Jimmy Jones and Mailon Kent are remembered as the Fab Five of Lanett High athletics in the late 1950s. The Panthers won state championships in 1957 and 1958.

In a Friday evening family gathering at the Hampton Inn, Dave Hill’s younger brother Mike Hill said that Dave played for three Hall of Fame coaches in Morgan, Ralph “Shug” Jordan of Auburn and Hank Stram of the Kansas City Chiefs and that his high school coach was the one that had the greatest influence on him.

There was a love-hate relationship between Mike and his big brother — he can remember shooting him with a BB gun when he was a child — but the good always far outweighed the bad.

He fondly remembers Dave’s first car. It was a 1944 Ford convertible. Their dad, the late I.D. Hill, bought the car for Dave, but he wasn’t supposed to drive it until he turned 16. “He was 15 at the time, and I was 13,” Mike said. “We found the car keys, and Dave drove it out to the country club. He let me drive it back.”

Little did they know at the time, Dave would go on to being very successful in the automobile auction business and would be a founding member with wife Toni in a retail automobile dealership in Panama City, Florida.

That followed his playing days as big offensive lineman for the Lanett Panthers, Auburn Tigers and the Kansas City Chiefs. He played in 150 games for the Chiefs and played a nine-year stretch without missing a game. Standing six-foot-six and weighing 260 pounds, he was pretty big for an NFL lineman at that time. Now, of course, NFL offensive tackles are often in the 6-8, 340-pound range.

In his day, Dave Hill of the Kansas City Chiefs was a mountain of a man. Ironically, his nickname at LHS was “Skinny.” At that time, he was somewhat on the lean side, standing six-foot-five-and-a-half and weighing 205.

He filled out with some hard muscle in college and in the pros.

Mike Hill said it was a rare treat for any guy to follow a big brother who is a starter for one of the better teams in the NFL.

“We would go to the games in Kansas City to watch him play and went to the two Super Bowls he played in,” he said. “The one regular season game we always wanted to see was when they hosted the Oakland Raiders. They had a big rivalry back then, and the fans really got into it.”

His favorite game to see in person was Super Bowl IV, when the upstart Chiefs dominated the heavily favored Minnesota Vikings and Dave had his greatest game. “There was a well-known sportswriter at the time named Jerry Izenberg,” Mike said. “He wrote that Dave had played a big part in winning the game for Kansas City for the great job he did that day in blocking Carl Eller.”

Eller is now in the NFL Hall of Fame. He was a member of Minnesota’s vaunted defensive line that was nicknamed the Purple People Eaters. Eller, Allen Page, Gary Larson and Jim Marshall comprised that group.

Mike said he would never forget seeing a Bob Hope Special on TV when he introduced members of the Super Bowl winning Chiefs.

“When he introduced David, he put his hand up on his shoulder and said, ‘This is the man who neutralized Carl Eller,’” Mike said. “That was really special.”

Super Bowl IV was played in Tulane Stadium in New Orleans on January 11, 1970. Dave Hill and the Chiefs shocked the world that day, beating the Vikings 23-7.

Hill was hugely successful with the Chief and remains a beloved sports star in Kansas City today. He is a member of the Kansas City Chiefs Hall of Fame. He and lifelong friend Bobby Hunt played in Super Bowl I, which the Chiefs lost to Green Bay 35-10. Hunt later went to play with a new expansion team, the Cincinnati Bengals, while Hill played his entire career in Kansas City.

Big Dave spent good portions of his life in Kansas City and in Panama City, but he never lost his love for Lanett and the Valley. There’s an old Valley saying that you’re not a real Valley person unless your like Daniel Burgers. Dave and his whole family would agree with that.

“When we were in high school, we all loved to go to Daniel’s,” Mike said. “It was located behind the old Lanett gym at the time, and everybody loved to go there. You could get a Daniel Burger, fries and a drink for 26 cents. We were always begging our daddy for pocket change so we could go there.”

Mike now lives in the LaFayette area but spends three days a week in Panama City with Dave’s Toyota dealership.

“For a long time, I would go and see him on Tuesdays,” Mike said. “Dave always had a way of stabbing you with words, but it was his way of making you think. It was his way of making you a better person. Dave was very successful in football and in business. He was such a good friend to so many people. He was the kind of guy who would give you the shirt off of his back. He found God when he and Toni were living in Moody, Alabama, and he was in the auction business.”

From the time they started dating in high school, Toni had always been the love of his life. They married when Dave was a freshman at Auburn. They were together for nearly six decades.

“He loved her so much,” Mike said. “He always kept a photo of her on the mantle in their house and always carried one in his briefcase.”

Dave was also an avid reader.

“Southern Living was one of his favorites,” he said, “and he always loved The Valley Times-News. No matter where he was he would always read The Valley Times-News from cover to cover. It was the same with The Kansas City Star. He loved to go to class reunions. That was one of his favorite activities of any year. He loved seeing his old classmates and reminiscing about the good old days at Lanett High. I think that class reunions meant more to him than the Super Bowl. He always told us that the best times of his life were those days at Lanett High.”

Mike said that Dave was something of a practical joker.

“He especially loved to pull them on mom,” he said. “I remember him sneaking up on her one day when she was taking a shower. He had a crawfish on a fishing pole and lowered it over the shower curtain so she could see it. You could her yelling all over the house!”

Dave Hill was the best neighbor anyone could hope for when he, Toni and the kids were living in Kansas City.

Daughter Sandee Finley of Leawood, Kansas was at the Friday family gathering and at Saturday’s memorial service at Johnson Brown-Service Funeral Home. She said that her dad had had his share of heartbreak in his life. He lost his beloved Toni several years ago, and sons Rusty and Chris have passed away over the years. She remembers him most as a kind, giving person.

“People were always telling me that he had helped them somehow,” she said. “He loved to give gifts. We we’re so excited to see the wrapped presents under our Christmas tree, but we knew we couldn’t open them until Christmas morning. He was very strict about that.”

One of Sandee’s favorite memories of her dad was that he was a good dancer.

“He loved to dance,” she said. “For a big guy, he was light on his feet. I will never forget him dancing at (her daughter) Olivia’s wedding. “He was so graceful when he moved.”

“He loved country music,” she continued. “It was something he grew up on and never grew tired of. He also loved Lanett and the Valley. He always talked about wanting to go back there.”

Dave was very much of a “If dad says no, ask granddad” kind of guy.

“Grandparents always seem to have more fun around their grandchildren than the parents do,” she said. “I remember being in church once and the pastor asking people to stand up and say what they loved. He said he loved his grandkids. When the grandkids came for a visit, he was so happy to see them and was really sad when they left.”

One thing he got hooked on growing up in Lanett was cornbread and buttermilk.

“I think he would eat that every day until he died,” Sandee said. “He had a way of making everyone he knew feel like family. That was especially true of Lanett and the people he knew there.”

In the final years when he was slipping away with dementia, Dave would frequently ask family members and his caregivers where Toni was. She was the love of his life, and there were times when he’d call out for her.

“I had a dream of my mom coming home to him completely healthy,” Sandee said, “and it made him so happy. Although I am sad about losing my dad, I know he is in a better place today, and that he’s with my mom again.”