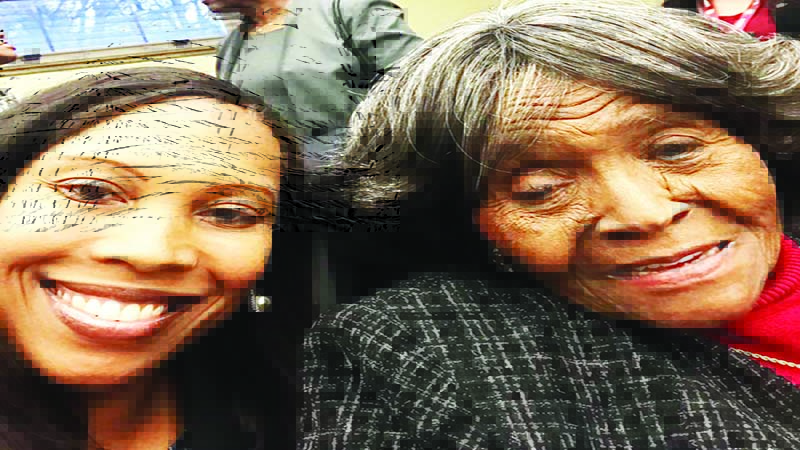 BIRMINGHAM— An Alabama civil rights icon and former Lanett resident died on Wednesday at 92 years of age. Autherine Lucy Foster was the first Black person to enroll at the University of Alabama. It took place in 1956, some seven years before Gov. George Wallace stood in the school house door to deny admission to Vivian Malone and James Hood. Her application for admission to the university was accepted by mistake. School officials had assumed she was white and when they discovered she was a person of color they let her know she would not be welcome.

Lucy had earned an undergraduate degree in English from Miles College, a historically Black college, in 1952. Wanting to have the best education she could get, she enrolled at the state’s flagship university and somehow fell through the cracks. It took four years of legal fights before she was admitted as a student, but her time at the university lasted only three days. Angry mobs threatened her life and pelted her with rocks and rotten eggs.

For her own safety, she was suspended from attending classes and expelled several weeks later.

It was an awkward and painful end to a young woman’s ambitious goal to earn the best education she could receive in her home state.

Things can change dramatically over time. The young woman who was hounded out of school in 1956 lived to see a College of Education building on the University of Alabama campus named in her honor. That took place only a few days before her death. In 1992, she had received master’s degree in education from Alabama on the same day her daughter, Grazia Foster, received a bachelor’s degree in corporate finance. In 2019, Lucy Foster received an honorary doctorate from Alabama.

After those bad times in the Tuscaloosa of the 1950s, Lucy would go on to marry a young minister named Hugh Foster. For a time, they lived in Lanett while Hugh was the pastor of the St. John Baptist Church. They were in Lanett from 1976 to 1981.

West Point Council Member and Lanett Senior Center Manager Sandra Thornton remembers Autherine Lucy Foster as a reserved woman who didn’t go out of her way to talk about her place in history. She also remembers the Fosters having Sunday dinners at the hymn of her parents, the Rev. and Mrs. O.D. Hill Sr.

“She was a quiet person and very humble,” remembers long-time St. John member Aleatha King, a retired educator. “She was mostly a stay-at-home mother for her children, who attended Lanett City Schools.”

The Fosters had a very good marriage and raised three daughters. The Rev. Hugh died three years ago.

A young woman with local ties had an interesting relationship with Dr. Foster and had grown really close to her when she died this week. Dr. Aletta Coleman Williamson is the dean of enrollment and retention at Gadsden State Community College and credits Foster for not only blazing a trail for women of color like her but also helping her in a big way during her doctoral studies at the University of Alabama.

Williamson is a 1996 graduate of Valley High and was the 2003 Miss Chatt. Her mother, Edith Coleman, is a retired educator and has served as president of the Chambers County Education Retirees Association (CCERA). After earning her undergraduate degree from Alabama A&M, Williamson later earned her master’s and a Ph.D. from the University of Alabama. She earned her doctorate in higher education administration in 2013.

While in graduate school, Williamson’s professor gave her an assignment to locate Autherine Lucy Foster and get her to speak to their class. It was a tall order, but Williamson located her living in the Birmingham suburb of Lipscomb.

“I walked up to her house, knocked on the door, and she answered,” Williamson said. “I asked her if she was Autherine Lucy Foster. She told me she was, and I explained who I was and why I was there. I asked her to come and speak to our class at the University of Alabama. She was reluctant to do it at first, but when I told her I might fail the class if I couldn’t get her to come, she told me that she had always wanted to help students and she’d do it to help me. On the day she was to speak to us, we traveled from Birmingham to Tuscaloosa in the same car with her daughter, Angela.”

Williamson credits Foster for helping her out of a jam in a big way by going to speak. “The funny thing is, that was the only assignment I had that term,” she said. “I guess my professor knew no one could top that.”

“Her being a civil rights pioneer has come full circle,” Williamson said. “She enrolled at Alabama in 1956. Fifty years later, I was in school there. She paved the way for young Black women like me to have a chance to go to the best colleges.”

Williamson said that what she liked best about Foster is that she was such a caring person.

“She always talked about having love for all people,” she said. “She was always sharing teachable moments with anyone she was with. You could learn so much from her. I will hold dear the things I learned from her.”

Williamson said it had been a privilege for her to attend the recent naming ceremony at the University of Alabama. Foster was there with her three daughters and was deeply moved by what happened that day. It was so much different from what she had experienced on those three terrible days in 1956.

“She paved the way for many generations to come,” Williamson said. “I may have never had the opportunities I have had without brave people like her. I can’t begin to tell you what it means to me to have spent time and learned from a living legend. She was a change agent in the civil rights movement, and I feel so fortunate to have been in her company. She was a kind, loving person who walked with the Lord. I am so thankful for having known her.”