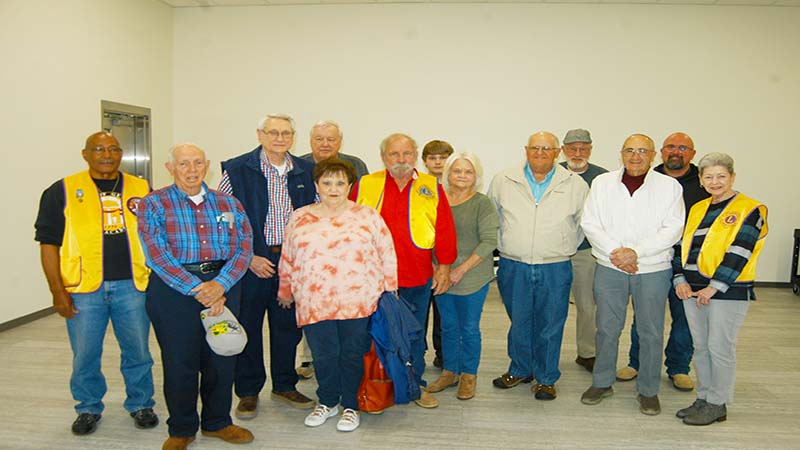 VALLEY — Members of the Valley Lions Club recently took a tour of one of the most technologically advanced meat processing plants in the U.S., and they didn’t have to leave the city limits to do it. They got an up-close look at the new John Soules Foods plant on Towel Avenue on Valley’s south side.

Plant Manager Brian Lloyd conducted the tour, and members of the club were offered a bird’s eye view of this most impressive new plant in operation. There’s an enclosed mezzanine that goes from one end of the plant to the other giving onlookers a great view of the plant’s two production lines in action. The stainless steel mezzanine was constructed from the 300,000-square-foot building’s ceiling. It’s about 10 feet wide and 15 feet tall. Each wall has ample windows to allow excellent views of what’s going on inside the plant. From one end to the other, it looks to be a good bit longer than a football field.

The line workers wear lots of clothing including masks and headgear. It’s all a part of the plant’s cleanliness regimen. Each worker wears boots that a sanitized when they enter a work area. Something that stands out is that the workers wear different colored suits. Those in red do not touch the product, those in blue do touch it, those wearing green are in areas where the chicken is being cooked, and those in black are the maintenance people.

Lloyd told the group that 140,000 pounds of breast meat chicken would be going through the plant that day. The chicken comes to the plant deboned and ready for processing. At one of the first places on the line is an x-ray machine that scans each piece of meat for of bone fragments and any other solid material that may have been left from the initial processing done at other plants. It’s extremely rare this happens, but it can’t get to the consumer that way.

A worker takes out the piece of chicken with a bone in it, removes it and puts that piece back on the line where it goes through the x-ray machine again.

“We make sure it’s out,” Lloyd said. “Everything going through the line is of a uniform thickness and is cooked at uniform temperature.”

The emphasis on ultra cleanliness is part of the John Soules brand.

The last thing any meat processing company needs to deal with is a shutdown due to a health-related issue.

Food that’s not properly prepared can result in illnesses such as listeria. According to the Centers for Infection and Disease Control (CDC), approximately 1,600 people in the U.S. get sick each year due to this. It’s fatal to around 250 people. It’s especially dangerous to pregnant women and babies.

Listeria is caused by bacteria and can make someone sick due to improperly prepared or cooked food.

Lloyd said he is well pleased with the performance of the work crew.

“There’s a learning curve involved in doing this kind of work,” he said. “Most of the people we have hired had never worked in a meat processing plant before. They are doing much better than I expected.”

The plant has been in operation since the middle of September. There’s more than 350 employees at the present time, and when production ramps up with three more lines that number will go past the 500 mark. Workers on the line make between $14 and $18 an hour. Maintenance people can make up to $38 an hour. There are two shifts each day and a vast amount of cleaning up takes place during the late-night hours. This ensures that the processing areas are as clean as they can realistically be when work begins the next morning.

The pieces of chicken going down the line are uniform in size. That ensures proper cooking and marinating. There are some large tumblers along the line equipped with ribs that can maintain a proper spread of marination through each piece. The ovens are heated between 340 and 380 degrees, depending on needs of the customer.

It’s what’s at the end of the line that sets the new John Soules Foods plant apart from any other meat processing plant. There’s a number of robots preparing finished goods for shipment. Boxes of packaged food are loaded onto refrigerated trucks and go to such destinations as Walmart, Sam’s, Costco and child nutrition programs. Anywhere from 35 to 50 trucks a day arrive on one end of the plant and a similar number leave on the opposite side.

There has been a total transformation of what was once a 266,000-square-foot towel distribution center for WestPoint Home. It’s now a much more sturdy and climate-controlled building in the 300,000-square-foot range. There’s also around 80,000 square feet in some new outbuildings that have gone up on the site.