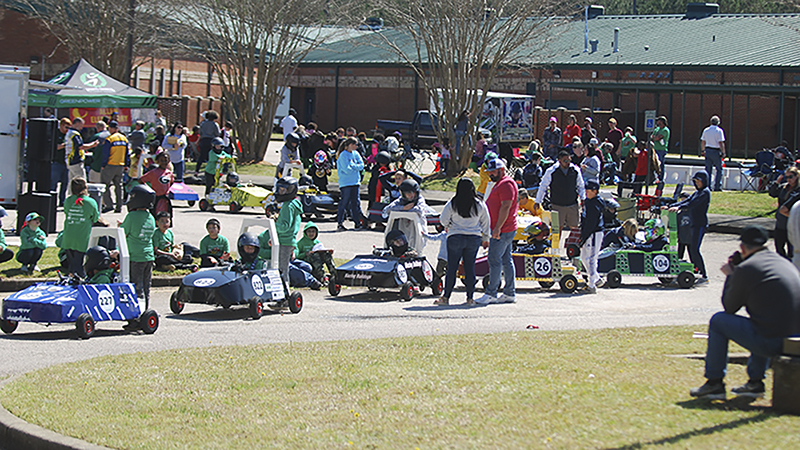 By Ethan Strang and Staff Reports

Seven teams of the 13 teams participating were from five of the local elementary schools (Long Cane, Rosemont, Ethel Kight, Franklin Forest, Callaway). Rosemont had three teams in the event with enough students to make an all-girls team.

“I told them when they get to the middle school next year that ‘I know a guy.,” Graham joked.

The Greenpower racing program only started being introduced to local elementary schools in October 2019 with Rosemont being the first. Callaway started its program during the current school year, and Berta Weathersbee is working on building a car right now.

The elementary school events consist of a drag race portion, a slalom portion, a circuit race, and a presentation.

For Saturday’s event, teams came from as far as Gulf Shores, Alabama and Chattanooga, Tennessee to participate in the rally.

“We couldn’t be more excited to be attracting teams from that far away,” Graham said. “It highlights how important it is to put on a great event.”

When people hear racing they mainly think of sports, but Greenpower is so much more than that. It is a STEM program that is helping young people take knowledge learned in the classroom and apply it to real-world scenarios.

“The skills they’re learning now, if we can build on them in middle school and roll those into our high school programs, the knowledge they have will help them down the road,” Graham said. “The teamwork, problem solving and public speaking they encounter in the Greenpower program will have them so much better prepared for whatever career they go into.”

Because the program has now expanded into local elementary schools and the high schools these students will be able to build on these skills for a decade if they stick with the Greenpower program.

The next step for Greenpower is to roll out the program to all the schools in Troup County.

“I think we only have three schools left where we’re trying to roll out programs, and we’re hoping to do that next year,” Graham said.

Graham believes that next year he will have over 20 teams participating in these events as the Greenpower programs spread like wildfire through the local, state and national school systems. He hopes to host this event at other elementary schools in the future so that the course can change and not be limited to the same course at Long Cane Elementary every year.

“It gives them even more project management experience, and I think it helps them to see the bigger picture of how the GreenpowerUSA program can positively impact their future,” Graham said.

Students from Inspire Academy in LaFayette hosted the annual Inspire Academy “IA 400” earlier this March.  The event is named for the annual spring green power racing circuit on their course track which is 0.400 miles long.  It was hosted in 10 degree wind chill factors with snowflakes falling on the student racers and their teams for the first 2 to 3 hours of the day.  The Inspire Academy racing team braved the temperatures sacrificing preparation time on race day.  Many of the students on the Piedmont Racing Team had to volunteer to hold course barriers in place throughout the day due to high winds.  In all, the students demonstrated incredible dedication to ensure a successful race was conducted according to team coach, Mr. Seth Stehouwer.

Unfortunately, according to a press release from Inspire Academy,  the Inspire racers’ overall results were negatively impacted by the severe cold and high winds they were forced to overcome on race day. Despite the challenges, the students and coaches were inspired to host a successful race for the visiting teams from Alabama and Georgia who traveled great distances to race in Chambers County.

The first race began at 8:30 a.m. with the day concluding with the race awards ceremony at 5 p.m. There were 12 racing teams in all that registered to compete in this event. The Piedmont Motorsports Racing Team is a competition team made up of students from Chambers County.  All of the students take classes at Inspire Academy participating in the engineering and manufacturing programs. The race saw 21 cars compete with over 175 student participants in both the middle school and high school divisions.  The “IA 400” saw competitions take place for both high school and middle school team competitions in Stock Car Races and Custom Car Races. The team coaches are Mr. Seth Stehouwer and Mr. Tim Blanks that serve as teachers at Inspire Academy. The day brought 400 plus parents, grandparents and fans to the campus of Inspire Academy to cheer on the drivers.

The racing teams set up pit crew stops on what became pit road on the main infield for the racing track. All drivers went through the driver safety training meeting and cars were scrutinized closely for modifications to ensure compliance. Each car used a transponder to track the number of laps travelled during each of the four racing heats that were hosted for competition. Inspire Academy Principal Dr. Tyler Nelson noted the race was a great success for all in overcoming the elements as an obstacle.

Ken Sealy served as the IA 400 racing grand marshal to wave the green flag to begin the day’s races.

The next race for the Piedmont Motorsports Racing team from Inspire Academy will take place on Saturday, April 16 on the campus of LaGrange College in LaGrange.