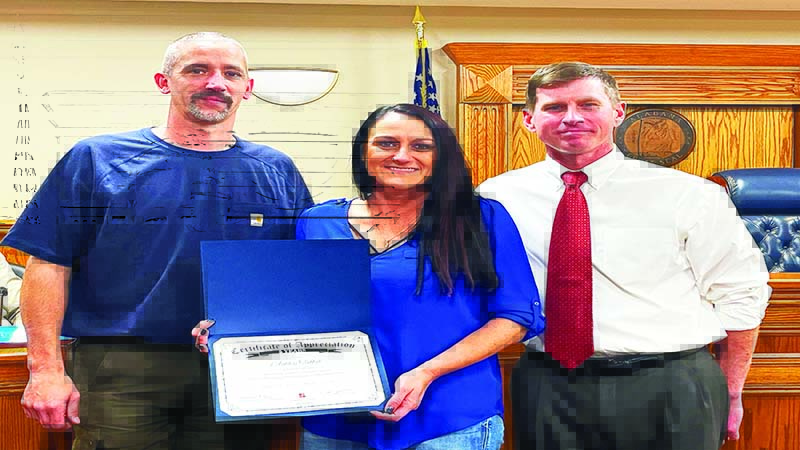 “I don’t think I really knew the duties and responsibilities as well as I do now of the position she’s in,” Harvill said. “Shes’ really grown in that position. Every department that interacts with her says she’s an asset to the county.”

“Josh asked me if I ever met Ashley,” Riley said. “Well, I actually taught Ashley. It always warms my heart to see students like you stay in our county and work in our county. She was an excellent student.”

In other discussion, the commission approved a public hearing for April 25 at 3:45 p.m. central. The hearing is to discuss a petition from West Rock to have a portion of a roadway on 45th St SW in Huguley be vacated. County Attorney Skip McCoy told the commission West Rock owns both sides of the roadway, and they intend to use the vacated road as additional parking.

The portion of 45th St SW that is to be vacated dead-ends at West Rock.

The virtual fair will be available via Zoom on Thursday, March 24, at 5:30 CST.

Snoddy said this is the first of what hopes to be an annual event, and hopefully, next year, the event can be held in person.

Harvill chalks this type of profit up to simple supply and demand.

“The reason for that type of demand is strictly supply and demand. There’s just a limited amount of vehicles out there right now,” he said.

Commissioner Charlie Williams commended Harvill on his many years of selling surplus vehicles and earning a profit for the county.

The commission approved changes to its employee manual dealing with comp time and political activity in other businesses.

The commission also approved a resolution for employees to participate in the wellness screening program.

To keep insurance premiums low and encourage county employees to remain in good health, employees will have to participate in the screening program or incur the cost of the additional premium between a standard rate and the preferred rate.

“This would provide that any employee did not receive the wellness screening by Oct. 31 of this year that, they would be forced to pay the additional premium between a standard rate and preferred rate as far as medical insurance, which is roughly $60 [per month],” McCoy said. “It behooves everyone to participate. It does not cost anything to participate.”

The commission will meet again on Monday, April 4 at 4 p.m. central.