Purge Nation to have grand opening this weekend in West Point 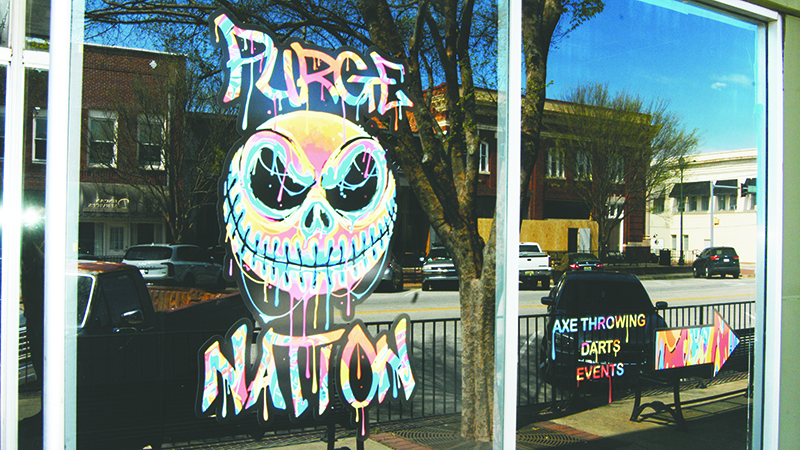 Fun seekers can test their skill at throwing axes or darts at Purge Nation, a new business located at 719 3rd Ave. in West Point. --Wayne Clark

WEST POINT — A grand opening will be taking place in downtown West Point this weekend for a new business. It’s on West 3rd Avenue in the American Smoke House building and goes by the name Purge Nation. The new business is owned by Tammy Heise and her son, Seth Heise.

Good food will continue to be served in the building, and there will be fun and unusual things to do in the way of entertainment. Purge Nation will have axe throwing, darts and some virtual reality.

“We won’t have fine dining, but we think our customers will like our sandwiches, appetizers, burgers, wings and ribeye steaks,” said Tammy Heise. “We are inviting everyone to our grand opening this weekend. We think you will like what we have going on.”

Tammy has bought and sold a number of restaurants over the years. She and son, Seth, are the co-owners of what was The American Smoke House. Food will continue to be served there with the fun and games taking place in the adjacent building. There’s one main entrance, and both store fronts are dark green.

Axe throwing is a sport that’s fast growing in popularity. It’s similar to darts in that the competitor is attempting to throw at a bullseye. People into axe throwing like it because it’s fast-paced and challenging. The physical action involved in throwing an axe from a maximum distance is much more demanding than throwing a baseball. Axe throwers are energized when they hear a thudding sound when a sharp object makes contact with wood.

Tammy has been living in the West Point area for the past year and really likes the mild winters in this part of the country. It’s quite a contrast to upstate New York, where she’s originally from.

“West Point feels like home for us now,” she said.

Son Seth is in his mid thirties and is a veteran, having spent six years in the U.S. Marine Corps. The apple of Tammy’s eye is Seth’s six-year-old son Asten.