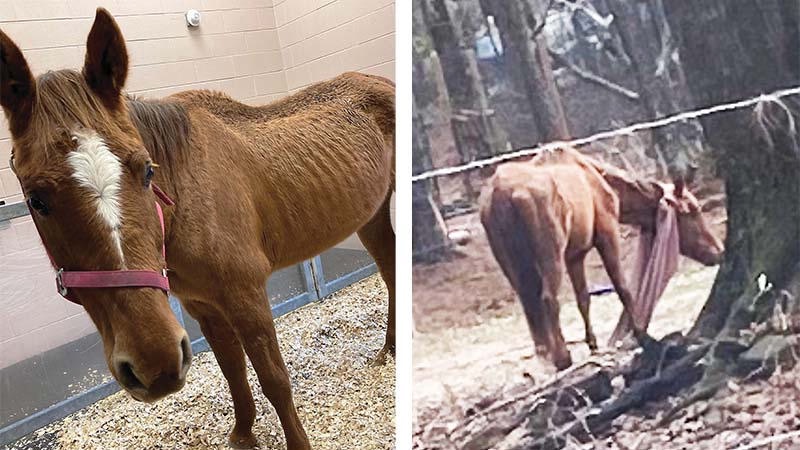 At the Monday meeting of the Chambers County Commission, resident Danielle Ross shared a concern that the county did not have anyone qualified to handle large animal neglect cases. Ross told the commission she moved to Chambers County from upstate New York in June and has been concerned about the welfare of equine and livestock nearby.

Ross pointed to a case where she witnessed four horses in the Cusseta area of Chambers County that appeared to be emaciated and tied to trees. Ross said she was told law enforcement had been called to the location several times over the years, but no action had been taken.

After being told three of the horses had died, Ross said she approached the owner and purchased the one remaining horse for $300.

“Within upcoming weeks of noticing the neglect, one was left. I took it in my own hands and asked the owner if I could buy her,” Ross told the commission. “For $300, I took this incredibly emaciated horse into my own care, immediately brought her to my place of work at Auburn University where she could be evaluated. The entire team of doctors at the J.T. Vaughn Large Animal Hospital were horrified over the condition she was in and informed me she would have probably perished within days from neglect, and it was incredible she was still alive.”

When Ross took possession of the horse she named Ahvee, she said the horse weighed 650 pounds, approximately 450 pounds underweight for a horse her size.

After Ross contacted the Chambers County Sheriff’s Office, Lt. Tommy High said he went out to look at the horse.

“I actually went out and looked at the horse, it had water, and it had available hay,” High said. “I can’t testify to the nutritional value of what he had to eat when I look at it. Now, when I looked at it, it was skinny.”

“None of us [deputies] are veterinarians,” High said. “We go to [the] police academy to enforce [the] law. And, we do not have animal control within the county other than if it breaks state law, like allowing dogs to run at large. There’s a lot of laws that we can enforce. As they come up, we will enforce them. But we don’t have an on-staff veterinarian or an on-call. Nor do we have a budget line item for such.”

High says that for cases like Ahvee, it would be nice to have money in the budget for a trained veterinarian, but until then, CCSO does what it can. He also says in certain cases, CCSO can call in the State Department of Agriculture as a resource.

“I’m not unsympathetic. It’s just we do what we can with what we got,” High said. “Now, we had a problem with horses down on 388, just around the corner from where this horse was. We did get the State Department of Agriculture involved in that. So, we do have a resource for that if we need to have that.”

High told VTN that he was ready to bring in the state when he found out Ross had purchased the horse and began her rescue efforts.

Unfortunately, despite the efforts of Ross and the team of veterinarians, Ahvee died.

“Two months after rescuing Ahvee, she started showing signs of colic,” Ross said. “I immediately rushed her to the hospital where she became quickly unstable and passed away suddenly on her own.”

According to Ross, the necropsy report shows neglect was a contributing factor in the death of Ahvee.

High says this case is under investigation, and a warrant has been issued for the previous owner of Ahvee.

“I actually took a report and generated a warrant for the arrest of the individual,” High said. “And we’re waiting, and we’ve been trying to make contact with that individual so we could go ahead and arrest him, and he could get his day in court.”

Ross said something needs to be done, and the county needs a livestock agent trained in spotting and handling large animals being abused or neglected.

“Chambers County needs a livestock agent in place,” she told the commission. “There needs to be someone of the appropriate education, with the appropriate tools, and the motivation to fix the issue in this area. This is something Chambers County needs to fund and take very seriously, instead of continuing to have a blind eye for. I hope to be of assistance to the county instead of an antagonist.”