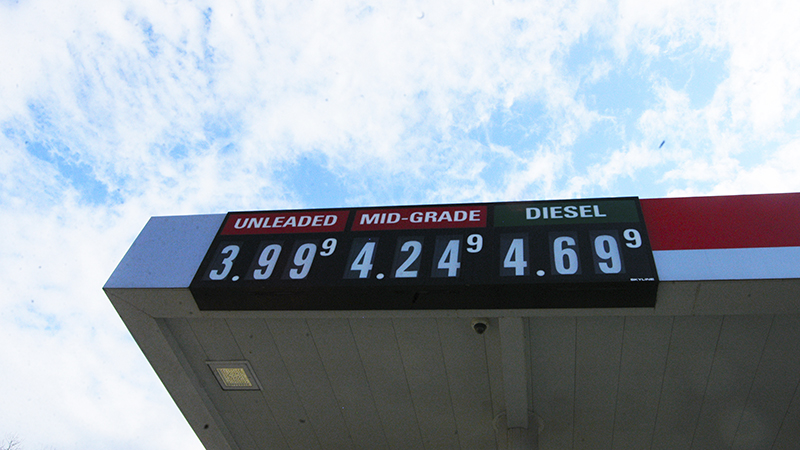 LANETT — The rising price of gasoline is a problem for most everyone these days, and it could get a lot worse before it gets better. Local prices are bumping up on $4 a gallon and are the highest they have been since the 2008 recession.

In some places in the U.S., it’s already over $5 a gallon as Russia’s invasion of Ukraine continues.

The VT-N did some on-the-spot interviews Monday afternoon at the Kroger fueling station to get an idea of how local people are being affected by rising prices.

A young West Point resident named Alexis said that she’s having to cut back on trips she’s like to make. Darryl, a Lanett resident said he puts 93 octane in his tank, and it’s already around $5 a gallon.

“It’s costing me $70 to fill up,” he said. “I am having to second guess going anywhere far from Lanett. I may have to get me a motorcycle.”

Brian Green, who works for Point University and lives in Newnan, said it’s costing him $130 a week to drive back and forth every day.

“My wife works out of our home, and it would be hard to relocate here,” he said.

A young woman named Tiffany who is the booth cashier at Kroger said that she gets lots of complaints about rising prices.

“All I can tell them is that I have to pay the same price when I put gas in my car,” she said.

Carol Bergh, who’s retired and lives in Lanett, said she is going to have to cut back on trips she makes to Auburn to visit her 94-year-old mother.

“It’s getting harder to go and see her,” she said.

A young man named Jimmy who works for Kimble’s Food by Design in LaGrange said it’s getting very expensive for him to drive back and forth to work five days a week.