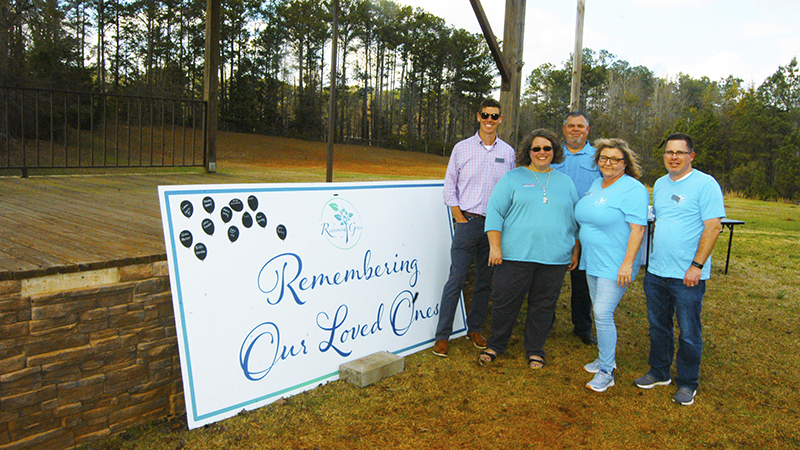 VALLEY — Black Balloon Day, an annual event dedicated to recognizing those who have lost their lives to substance overdoses, was observed Sunday afternoon at the Upper Room Church. The event was hosted by Redeeming Grace Ministries. Those coming out had the opportunity to write the name of a friend or family member they had lost to substance abuse. Pastor Donnie Lumpkin of the Church on the Rock, Phenix City, spoke from an outdoor stage on sustaining hope through a difficult time due to drug addiction.

Redeeming Grace Ministries is active in the East Central Alabama region. Its mission is to train and equip people to live a life of everlasting recovery through Jesus Christ.

“We offer a residential program for women who are transitioning out of a correctional facility or rehabilitation program who want to transform their lives and maintain recovery as thriving, contributing citizens,” said founder Lara Potts. “Recovery is more than an individual pursuit. We are supported by a community of churches, private donors and groups that believe in our mission, We covet your partnership through praying, supporting financially, or volunteering.”

Potts described the Sunday afternoon gathering as a memorial service to comfort those who have lost loved ones to drug abuse.

“It has been estimated that someone in the U.S. dies from a drug overdose every five minutes,” Potts said. “A total of 944 people died in Alabama last year due to drug overdoses, but there is hope through sobriety. Studies have shown that if someone says away from substance abuse for five years there’s an 85 percent chance they will stay that way for the rest of their lives.”

Potts said that Redeeming Grace Ministries shows love by seeing value in all people, offering quality programs, growing in a personal relationship with Christ, creating an environment of excellence, operating with integrity and being excellent stewards of resources.

Black Balloon Day is celebrated around the world every year on March 6. Black balloons are displayed to remember those who have been lost to substance abuse. It was founded by Diane and Lauren Hurley in honor of their family member Greg Tremblay, a father of four who died of an overdose on March 6, 2015, at the age of 38.

In setting out a black balloon, those who are observing Black Balloon Day are sending out a collective message that substance abuse is costing many lives.

According to the National Center for Health Statistics (NCHS) and the Centers for Disease Control (CDC), nearly 92,000 Americans died from substance abuse overdoses in 2020 – a 26 percent increase over the previous year. A significant portion of these deaths were due to synthetic opioids, primarily fentanyl. Methamphetamine, cocaine, prescription opioids, heroin and antidepressants also caused deaths, but to a much lower degree.