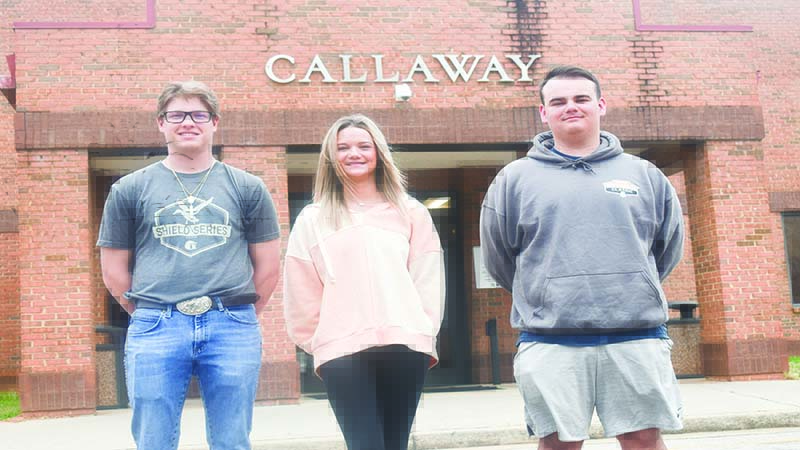 It was supposed to be a calm, relaxing day for the Callaway High School students attending a fishing tournament at Lake Martin in Alexander City late last month. The most exciting occurrence was supposed to be the amount of fish the students caught.

However, three Callaway High students soon found themselves part of a rescue effort after a boat containing two Springwood students crashed into a shoal area right in front of them.

Student Nathan Odom was on a boat with his father when he saw a boat carrying an adult man and two high school-age boys crash into a rocky shoal. The captain of the boat remained mostly unharmed in the crash, Odom recalled, but the other two boys were projected from the boat on impact.

“[I thought] we’ve got to go help them,” said Odom. “We got the kids out of the water and back to the ramp. They were shaken up pretty bad. One kid said all he could remember was hitting the water.”

Odom’s schoolmates, Caden McMillian and Krysten Garrett, were in the boat behind him when the crash occurred and came forward to assist. They recalled the water was about seven or eight feet deep. They said another boat had witnessed the accident but had gone right by it.

“I heard Mr. Danny yell ‘rock,’ and I looked up and said ‘are those two kids in the water?’” Garrett recalled.

“It kind of freaked me out when we were driving up to them,” McMillian added. “We didn’t see the kids moving. It looked like they were knocked out from how far back we were. I thought something was seriously wrong.”

The students, along with their boat captains, were about to assist the injured passengers to shore. The captain of the boat was able loaded the boat and both of the injured students into his truck and get them to the hospital, the students said.

The students later found out the boys were students at Springwood School. One suffered a minor concussion while the other sustained a broken femur above the knee and another leg fracture.

“The kid with the broken knee’s stepdad called my dad,” Odom said. “He was saying thank you for what ya’ll did, I can never repay ya’ll.”

The student’s deed of valor would may have gone unnoticed had it not been for a phone call from Amy Britton, the assistant to the Head of School at Springwood.

Callaway High Principal Jason Graham called the students in to listen to the message a few weeks following the incident.

“They came to the aid and greatly helped two of our fishermen yesterday,” Britton said in the message. “We appreciate all their help for [helping] our two students.”

Graham called Springwood and was sent directly to the Head of School, Lowrie McCown.

“I understand you didn’t get to the weigh-in on time, so what a brilliant sacrifice of servanthood that you guys demonstrated for helping out our two athletes who were under stress,” McCown said in the phone call. “Thank you.”

Graham noted the student’s humbleness and that their actions were an example students should exemplify.

“These three students are not the type to jump out and [bring attention to themselves],” he noted. “That’s what we try to promote: be the example of everything.”

Odom said fellow classmates asked him and McMillian why they chose to get involved.

His response was simple.

“Because it was the right thing to do, and you have to do what you got to do,” Odom said. Garrett added that she had been called a hero by her co-workers at Pizza Villa.

A video cataloging the students’ call with McCown is available on Callaway High School’s Facebook page.