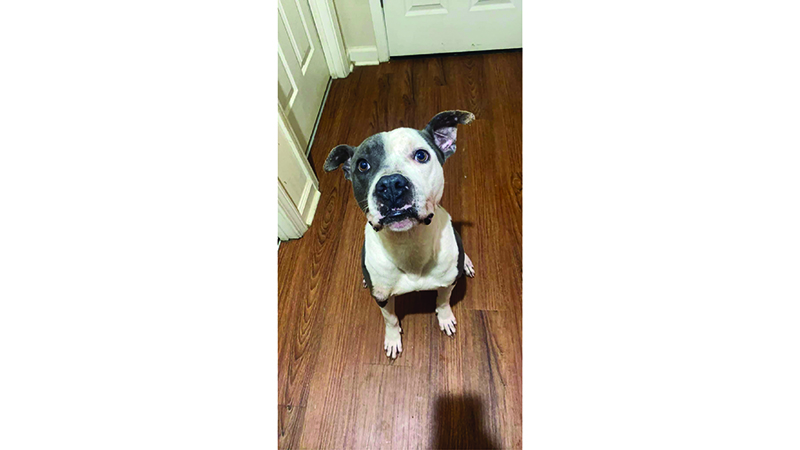 Rescue in need: Big Valley Animal Rescue is faced with a large bill for veterinarian services and is in dire need of support. Salem, a dog who required $1,200 for veterinary treatment, is shown above. Photo contributed.

Big Valley Animal Rescue, a nonprofit organization that saves animals from being euthanized, has a very big bill to pay after providing veterinary care to at least 40 animals, BVAR  coordinator and transport coordinator Haley Warwick estimated.

“I would say after our payments today, it will probably be about $9,000,” she said Friday.

“For example, we had a dog that was pulled from Chattahoochee Humane a couple of weeks ago, and he had a tumor on his chest. And he had severe heartworm,” Warwick said.

“About a month ago, we pulled a dog … she had to have, like, four surgeries, so we spent about $4,000 on her,” Warwick said. “She’s also severe heartworm positive. Just years of neglect.”

The big bill also covers boarding costs, as BVAR doesn’t have enough fosters. BVAR pulls as many animals as it can afford from the Chattahoochee Humane Society to prevent euthanasia.

Warwick said there’s no deadline to pay the bill off, but BVAR aims to get it paid off as soon as possible so it can continue to save animals from euthanasia. BVAR doesn’t want to be overwhelmed by debt. Their goal is to pay the bill off before they take in more animals, but Warwick said they might take in more animals first if they can afford it.

It is not that rare for BVAR to owe so much money. Warwick said their vet bills get this high about once every couple of months.

“It depends on what’s going on medically with some of our animals,” she said.

BVAR sometimes but not always gets money in a timely manner.

“We have good donors who are pretty regular,” she said. “We call them and say, ‘Hey, we really need to pay off this bill’ or ‘We have this really bad medical case.’ And they’ll help us. And our partners in other states will help us if they can, as well … but we also pull animals that don’t have commitments. And those are like the dog, Salem, that we just pulled that was $1,200. She didn’t have a commitment. So we’re required to fundraise for that whole $1,200.”

Warwick explained commitments. BVAR has northern rescue partners in New York, Pennsylvania and Virginia who are committed to taking in some of BVAR’s animals to have adopted in the north.

How many animals might be euthanized if BVAR doesn’t save them varies each week.

“We just pulled four puppies from the shelter on Wednesday because they were going to euthanize two dogs,” she said. “So, it just depends on how full the shelter is. But every week, we have to pull between, I would say three to four dogs.”

Warwick said any donations would be appreciated.

Donors can send money to BVAR through PayPal https://www.paypal.com/paypalme/bigvalleyanimal, through Venmo to @bigvalleyrescue and through Cash App to $bigvalleyrescue.