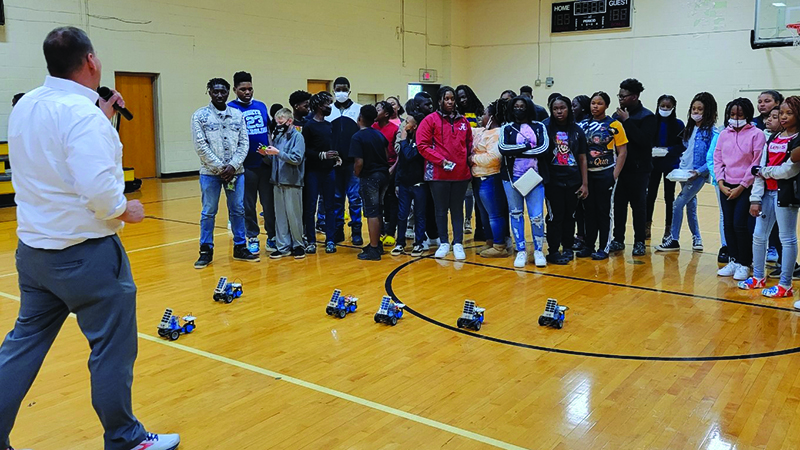 Thanks to a partnership with SOLV Energy, the Chambers County School District spent last week recognizing Earth Day, according to a CCSD press release. In preparation for Earth Day, the Inspire Academy STEAM outreach team worked to compile resources to support the district’s initiative for all of kindergarten through eighth-grade students. Resources were designed to help facilitate and support a mini solar kit car activity that has been provided by SOLV Energy for students throughout the district. The STEAM education outreach supports a systematic approach to learning that uses science, technology, engineering, the arts and mathematics as points of emphasis for guiding students in inquiry, dialogue and critical thinking activities.

Chambers County Schools Superintendent Casey Chambley noted the district’s special thanks to SOLV Energy and Jennifer Hershman, who serves as the company’s director of community relations at their office in San Diego, California.

“The students and staff in Chambers County are thankful for the partnership with SOLV Energy in sponsoring 2,300 plus DIY Solar Kit Cars for students across the district,” Chambley said.  “This is a fantastic project-based learning activity which supports this STEAM initiative for our students.”

Students in kindergarten through second grades were provided supplemental enrichment activities along with the mini solar car kits to complete with parents. All of the district’s third through fifth graders were assisted in assembling their mini solar car kits with teacher-guided instruction and support from the Inspire Academy STEAM outreach team. Finally, the middle schoolers across the district in grades six through eight were also provided their own mini solar car kits to assemble along with STEAM Solar Dance Party experiments to complete with their cars. Thankfully, the district had direct sun, with the weather supporting the Inspire Academy School visits planned for Tuesday through Friday as the cars operated off the solar energy.  Additionally, the STEAM outreach led by Stehouwer provided an orientation on rechargeable hydrogen-powered cars along with lessons on alternative energy sources for students.

SOLV Energy is a solar services provider for utility solar, high-voltage substation and energy markets across North America. The company believes that good energy has a ripple effect, which is why it only takes on projects that provide cleaner power, better jobs, greater education and brighter futures for communities.. It is recognized as an industry-leading solar contractor and O&M services provider that has built 8 gigawatts (GW) of utility solar capacity and manages over 9 GW in 26 states.

The AL-Solar project located in the city of LaFayette covers over 1,100 acres and is a 72-megawatt initiative that produces enough power to meet demands for up to 18,000 homes.

It is the largest solar power project in the state of Alabama. Senior students at LaFayette High School were treated to a SOLV Energy fence line visit to the vast solar energy farm located in the city of LaFayette.  The students were hosted by a former LHS graduate, Devon Mackey, who serves as a business operations coordinator for SOLV Energy.

In other news, the CCSD shared their annual report from Schneider Electric with graphics detailing the carbon footprint that has been generated by the school system since the energy efficiency plan was put into effect for the district in 2014.

The savings reflect a 758-ton reduction in carbon dioxide emissions by the school system, which has saved 1,071,448 kWh.

The press release said the savings equate to charging over 96 million cell phones.