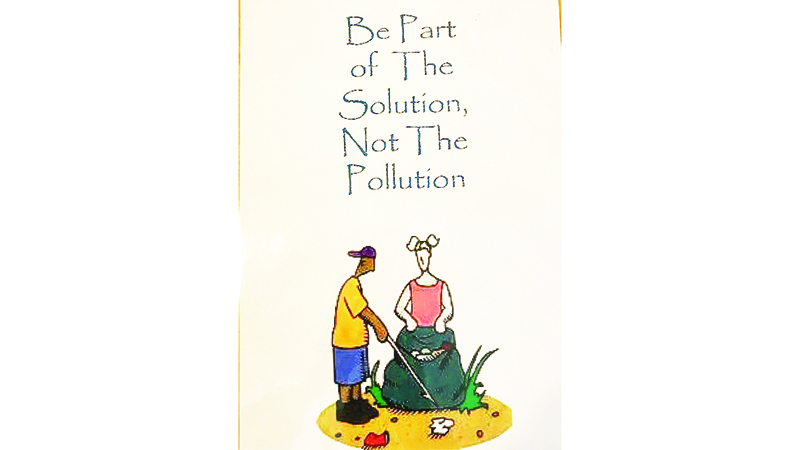 Sam Bradford has heard complaints about litter on roads throughout his career as a Chambers County Commissioner for District 4. After joining a leadership program for second-term commissioners, which is run by the Association of County Commissions of Alabama, he decided to do something about it. A requirement of the program is to create a project outside of his regular commission duties that would benefit his home county.

“I chose litter,” he said. “When we went through the budget process last year, I got the commission to agree to put $6,000 in the commission budget to support this effort.”

Bradford said on Jan. 17, the commission and others held an organizational meeting at the ALFA building in LaFayette to discuss the project. One of the guests was Clean Campus State Coordinator Jamie Mitchell from Alabama PALS (People Against a Littered State), a statewide organization. Others present were Chambers County School District Superintendent Casey Chambley, science teacher Cantrece Nelson from Lanett High School (who was representing Lanett City Schools), Executive Director Carrie Royster of the Greater Valley Area Chamber of Commerce, County Engineer Josh Harvill and Assistant Engineer Daniel Lundy.

At the meeting, Mitchell gave a presentation on the Alabama PALS program.

Those at the meeting thought they should come up with a slogan. They settled on “Be a part of the solution, not the pollution,” which they had printed on about 80 posters that were distributed to local schools.

The commission spent about $2,000 on supplies such as vests, gloves and posters. Bradford said his project team decided to model their litter program after some successful ones in Mobile and Elmore Counties.

“I just made it available to schools up through April,” he said. “All the schools have got this information, and they can email me back, and I will assign them a Chambers County Highway Department road, a mile. And if a school group picks up litter of a mile of that county road, they’ll get $250.”

Bradford said schools have to take pictures before and after their work to prove they picked up trash.

“As of right now, Five Points Elementary, Eastside Elementary, LaFayette Lanier Elementary and the Junior Ambassadors have already requested and completed their pickups and gotten their money,” he said. “And then, at Lanett High School, there’s like six clubs and organizations that have requested… They’ve not completed yet, but they’ll get six miles of pickup there. Springwood School is going to do a mile. W.O. Lance Elementary is going to do a mile.”

At a commission meeting on Monday, Bradford plans to announce that non-school groups such as community organizations and church groups can take on the last few miles left to clean up in the project. He said there are only about four miles left.

In addition to his litter pickup project, Bradford said Alabama PALS is holding a statewide poster and art-making contest, which eight local schools are participating in as part of a local partnership. Kindergarten through three and grades four through six are challenged to make posters with litter themes, and grades seven through 12 are challenged to make recycled art.

“I picked up the top three in each category, which was kindergarten through three, four through six, seven through 12 as was appropriate,” Bradford said. “And then carried all of those to Alabama PALS last Friday, and they will be judging the statewide competition. And then, if they win at the state level, they will get a cash prize up to $200 and a plaque. That’s for first place.”

State winners get to go to a luncheon with the governor in November. Bradford said the Chambers County Commission will also give out local cash prizes for posters. Winners have already been chosen locally.

Local winners of the poster contest and another effort that Bradford calls “Clean Schools” will be announced at a Chambers County Commission meeting on Monday, May 16. There will be $300 in prizes, which Bradford stressed is from private funding, not county money.

“I was able to get some local funding for prizes, a $50 prize in each category,” Bradford said. “So I had Wanda Huguley, who’s a retired teacher, Susan Crowder, who’s a retired teacher, and Carrie Royster, who’s the director of the Chamber of Commerce… I had them to judge all of the school posters. And we had three winners … we had two winners for posters in kindergarten through three, four through six and then we had one winner in seven through 12 in recycled art. And the winner in each one of those categories will receive $50 in each category.”

“And hopefully we’ll have some state winners,” Bradford said. “State judging will be completed on May 11.”

The Chambers County Commission is also running a Clean Schools effort in partnership with Alabama PALS. Schools that participate in this program can submit to Bradford a two-page or longer report of what they’re doing to clean up their schools. Bradford said a lot of participating schools have tied their Clean Schools projects to Earth Day. He said he believes May 4 is the deadline to send in reports.

“And then I’ll get my teachers back together, retired teachers, and get them to judge the best activities for the Clean Schools effort,” he said. “And there again, schools will get $50 in their category for K through three, four through six and seven through 12 for their clean school efforts and the activities that they did. Some of them just really went all out and just had a really big effort.”

Bradford said he hopes the programs will be a continuing effort of the Chambers County Commission.