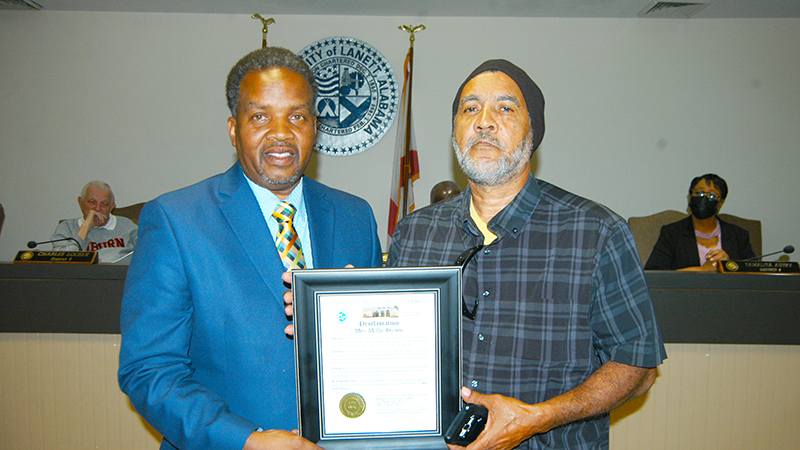 Birthday recognition: Above, Council Member Tifton Dobbs (left) presents a copy of the proclamation to Mellie Brown’s son, Luther Brown, who is a long-time city of Lanett employee. Photo by Wayne Clark.

LANETT — A long-time Lanett resident has been honored for the city council for the exemplary commitment she has had to her family. Mellie Brown will be celebrating her 90th birthday on Wednesday, April 27. She raised eight children and became the matriarch of a growing family that included grandchildren and great-grandchildren.

The proclamation reads: “On Wednesday, April 27, 1932, Mrs. Angelie Peterson was blessed with a beautiful baby girl she named Mellie Brown. On April 27, 2022 Mrs. Brown will joyfully celebrate 90 years of life with her family by her side.”

Despite receiving only a fifth grade education, Brown has had a knack for numbers, writing checks and typing. She’s very good at working Facebook.

“She also enjoys planting beautiful flowers, cooking and spending time with her children,” the proclamation reads.

Brown raised eight of her own children and has lived to see generations of grandchildren and great-grandchildren. Her son, Luther Brown, is a long-time employee of the city.

“It is with great pleasure the mayor and Lanett City Council hereby expresses best wishes and congratulations on this 90th birthday to Mrs. Mellie Brown,” the proclamation reads.