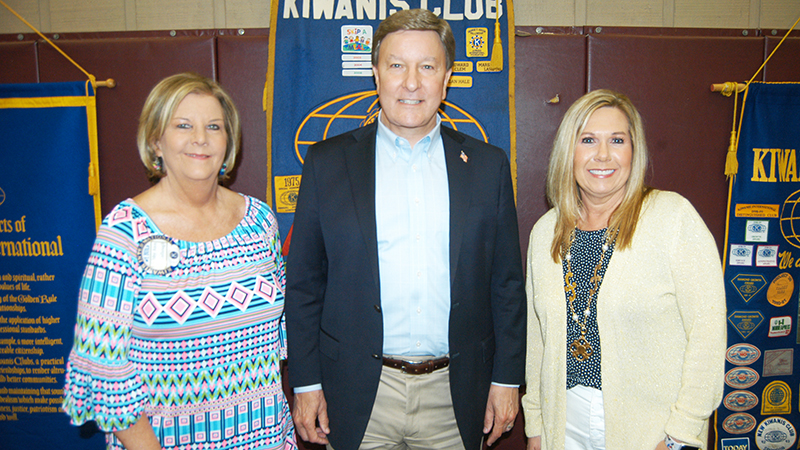 Congressional visitor: Congressman Mike Rogers (at center) was in Valley on Wednesday to speak to members of the Kiwanis Club of Valley. At left is Bobby Ann McCollough, the program chair, and at right is Tammy Merritt, secretary-treasurer. Photo by Wayne Clark.

VALLEY — While the U.S. Congress is in the midst of a two-week Easter recess, many members of Congress are visiting their districts to meet with their constituents and to see what’s on their minds. Alabama Third District Congressman Mike Rogers is currently making such visits throughout the east-central Alabama district he represents in Washington. On Wednesday, he was the guest speaker at the noon hour meeting of the Kiwanis Club of Valley.

The meeting was held inside the family life center of the Langdale Methodist Church. A large crowd in attendance included Mayor Leonard and Commissioner Debra Riley and State Representative Debbie Wood. Rogers was accompanied by his chief of staff, Chris Brinson, and his district director, Sherri Rollins.

Rogers talked about two basic topics: (1) what to expect from Congress over the remainder of the year and (2) the ongoing war between Russia and Ukraine.

It’s normal, said Rogers, when a new president is elected and he has a Congress he can work with, that first year in office will be busy with lots of proposed legislation. Things tend to slow down the next year because there’s a mid-term election. That’s what’s taking place now. Possibly the only piece of major legislation that will be passed this year is the Defense Authorization bill. It has been approved by Congress for 61 years in a row now and is the House and Senate’s way of saying they back the troops. In most years, that one piece of legislation passes in a unanimous vote.

Rogers said President Joe Biden’s Build Back Better proposal is all but dead. There’s no way a major bill can pass, but part of it, such as legislation on prescription drugs, could possibly get through.

Rogers expects the 2022 midterms to be good for Republicans. He’s very confident they will have a majority of at least 218 House members in the next Congress but is unsure if that number can get to 235. That’s the number that will allow the GOP to more easily pass legislation. There’s a group of about 12 to 15 House Republicans called the Freedom Caucus (Rogers calls them knuckleheads) that can make the passage of any legislation very difficult to do. Democrats have their extremists, too, better known as the Squad. “That’s what happens when you have small majorities,” Rogers said.

The out-of-power party almost always does well in mid-term elections. Rogers attributes this to a new president trying to make changes and that “people don’t like change.”

Rogers joked that members of the House sometimes call the Senate an old folks home. “If you want to add 30 years to your life, get elected to the Senate,” he kidded.

Rogers added that both parties have their troublemakers.

“There’s a lot of good people in Congress, but there are some who will act up and get in trouble,” he said. “There’s no more need of them being there than to have a hole in the head.”

Rogers blames the Biden Administration’s disastrous withdrawal from Afghanistan for being a factor in emboldening Vladimir Putin to invade Ukraine. He credits U.S. intelligence on having done a great job in tracking Russia’s movements prior to the invasion. It didn’t take anyone by surprise, especially the Ukrainians, who have inspired the western world with their determination to be free.

Rogers has visited Ukraine several times prior to the current war and is not surprised Ukraine has put up such a good fight. He said Ukraine’s military capability was not good when Russia invaded the eastern part of the county in 2008 and seized Crimea in 2014. With much in the way of western aid, they have come a long way since then and now have a first-class fighting force.

NATO countries trained their troops near the Ukrainian city of Lviv for a number of years prior to the outbreak of the war.

Most military analysts believe the Ukrainians have clearly outfought the Russians but have suffered great losses due to constant missile and artillery attacks. Some cities have been all but leveled.

“We trained their military leaders,” Rogers said. “They told us they had the manpower, and that what they needed were the weapons to kill Russians with. I have been so impressed with the way they have been fighting for their country. They have showed the world that Russia has weaknesses.”

The inhumanity of what has been going on has united the world against Russia and Vladimir Putin.

“He is being seen as another Hitler,” Rogers said. “He will never be able to wipe that stain off. Lots of U.S. corporations have left Russia, and that’s good.”

Rogers said that the U.S. has a bigger, long-term problem with China. He said there’s one big difference between Russia and China.

“Putin doesn’t care what anyone thinks of him, but China does care about what people think,” he said. “We cannot allow China to have Taiwan. Because of what’s going on in Ukraine, they probably won’t try to take it right now, and I hope it stays that way.”

Rogers said he thinks it’s China’s goal to be the world’s preeminent superpower, and that the U.S. needs to be fully aware of this and to be ready to compete with them.

“We have been at war somewhere for 20 years now,” he said. “We now need to transition into a military of the future. We won’t be needing as many soldiers, tanks and armored personnel carriers in the army of the future. The military of the future will involve space, cyber and artificial intelligence. Who leads in that will lead the world. Our military will be smaller but much better trained. We will have directed energy capabilities.”

Any future conflict we could get involved in must have two factors, Rogers said.

Rogers added that if the American people don’t have the will to make this transformation, China could pass us as a superpower and will dominate the world.

Rogers made the case that the U.S. is by far the best place in the world to live.

“There’s not a country in the world that wouldn’t trade what they have for what we have,” he said.

Chambers County, said Rogers, is in a great location for future growth.

“You’re not far from the Atlanta airport, and you have I-85,” he said. “Auburn University is nearby. You have everything you need right here.”

Many Alabama communities can benefit from the recent announcement by Lockheed Martin and Airbus to manufacture LMKT strategic tanker aircraft in Mobile. It will be a huge operation, and they will need supplier plants to build needed parts for them.

Rogers said a looming problem for the near future is the possibility of global food shortages.

“Russia and Ukraine are the top two wheat producers in the world, and they are at war,” he said. “The problem we have with inflation is probably going to be with us for several years. Even if Republicans taken the House and Senate this year, it will probably be with us for two or three years.”

Rogers said it is concerning to him that China is making investments all over the world in an effort to expand their influence. By comparison, the U.S. is a rudderless ship. “They are borrowing money with no accountability,” he said of the Chinese. “It’s insane, and people in this country are helping fund what they are doing. We need to be thinking about how we can get out of this situation.”

Rogers is a native of Calhoun County. He grew up in Blue Mountain, a small mill village near Anniston. His mother worked in a local mill and his dad was a firefighter. He has been a member of the U.S. House of Representatives for close to 20 years now. He has served on the House Armed Services Readiness Subcommittee, which oversees the largest single account in the Department of Defense budget. The committee has jurisdiction over military readiness, maintenance and logistics. The east Alabama area he represents is home to a portion of Fort Benning and the Anniston Army Depot, which has been nicknamed the pit crew for America’s war fighters.

Rogers has also served on the Strategic Forces Subcommittee, which deals with missile defense and nuclear weapons issues.