Dr. Corey Courtwright talks about his work in Panama 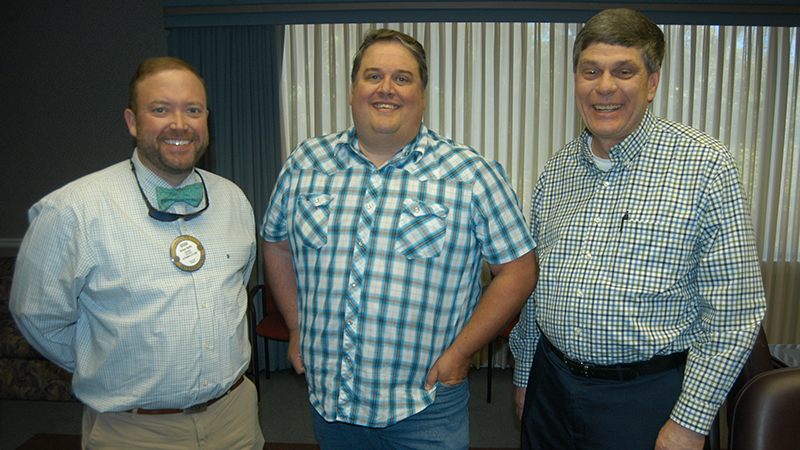 Rotary: Dr. Corey Courtright (center) was the guest speaker at last Thursday’s noon hour meeting of the West Point Rotary Club. At left is Brian Alpin, the club president, and at right is Rob Huling, the past president. Photo by Wayne Clark.

WEST POINT — In March, Bethany Courtright spoke to the West Point Rotary Club on her having lived in Russia and having visited Ukraine. This past Thursday, her husband, Dr. Corey Courtright, talked to the club about his experiences in helping the indigenous people of Panama have better diets by building ponds and growing their own tilapia and catfish. Bethany is the director of the children’s ministry at Spring Road Christian Church, and Corey is a fisheries biologist. He has a B.A. from the University of Missouri and M.A. and Ph.D degrees from Auburn in aquaculture.

The couple met when he was studying at Auburn.

While doing the work he has been trained to do in aquaculture, Dr. Courthright has pretty much made a tour of the Americas, having spent time in Panama, Ecuador and Haiti. At each stop he has worked with local peoples in teaching the intensive production of freshwater fish to have more healthy diets.

In Panama, most indigenous groups still live on ancestral lands. The three largest groups are the Ngabe, the Bugle’ and the Guna. Two other prominent groups are the Madungandi and the Wangandi. Panama’s indigenous people make up over 400,000 people, or approximately 12 percent of the country’s population. Most of the native population lived near the coast and made a living from the sea when the Spaniards came in the 1500s. As these Europeans settled near the coast, the natives fled inward to the high mountains toward the center of the country. Most of them live there today. It’s rugged country and difficult to reach. For many years they were in isolation from the civilized world. Dr. Courtright said there are some stories that have been passed down through the generations about first contact. “When they saw the first planes they’d ever seen fly over they were afraid,” he said. “It is said they killed their roosters because they didn’t want their crowing to give away where they lived to those who were in the planes.”

The mountain land is not good for growing crops, and as a result, malnutrition is a big problem for the indigenous people. “Starvation is a way of life,” Courtright said. “More than 75 percent of them are malnourished. That’s one of the worst rates in the world.”

The main religion of the mountain people was founded in 1962 and is based on a belief that things were better in the olden days. “Outside world influences on their children is frowned on,” he said. “It’s a difficult place to get to, and you have to do a lot of hiking to get there.”

A beneficial thing about fisheries, said Courtright “is that you can grow a lot of protein at low cost.”

On the other hand, there’s a whole lot of work involved in growing it from scratch.

He worked on a 32-acre site that was set up by a church organization as a demonstration site to teach aquaculture and subsistence farming.

“We had to dig ponds when we first got there,” he said.

Each pond would be an estimated 150 feet long and 150 feet wide and some three to four feet deep. “I taught them how to raise tilapia and catfish,” he said. “You could feed them leaves, grass clippings and other yard waste. You can harvest tilapia every six months or so. I also worked with them with their farm animals.”

Courtright did that for four years and then rotated between Ecuador, Haiti and back to Panama again. It was missionary work for a church organization. There was lots of work involved, but there was always time for Bible study. Each person has both a physical and a spiritual side. “The spiritual side is more important,” Courtright said.

There are challenges to this belief, especially when you are working with those who are suffering. “People with kids who are starving will ask you “We know you love God, but where is He?”

Farming is more difficult in Panama than it is in the U.S. It’s a case where too much sun is the problem. “The days are always 12 hours long, and that affects the kind of crops you can grow,” Courtright said., “There are always problems you didn’t expect. Something kept biting our hogs, and we knew we had to make this stop.”

It turns out the biting was being done by vampire bats.

That problem was solved by having some strong netting over the hog pens.

Another constant worry was snakes. There’s a lot more of them in Central and South America than in the U.S. They are also bigger and deadlier. The bushmaster and the fer-de-lance in particular are greatly feared. The bushmaster is said to be capable of killing anything that crosses its path, and the fer-de-lance is known to have killed more people than any other reptile in the Americas.

The most dangerous spider in the world, the Brazilian banana spider, is also common in Panama. If you are an indigenous child growing up in Panama, if starvation doesn’t get you, the snakes and spiders might. A constant thought haunted Courtright when he was living with the natives.

“When I would see the children, I’d know that no matter how hard I worked that some of them were going to die,” he said. “The only thing I could do was to trust God with it and to do his will.”