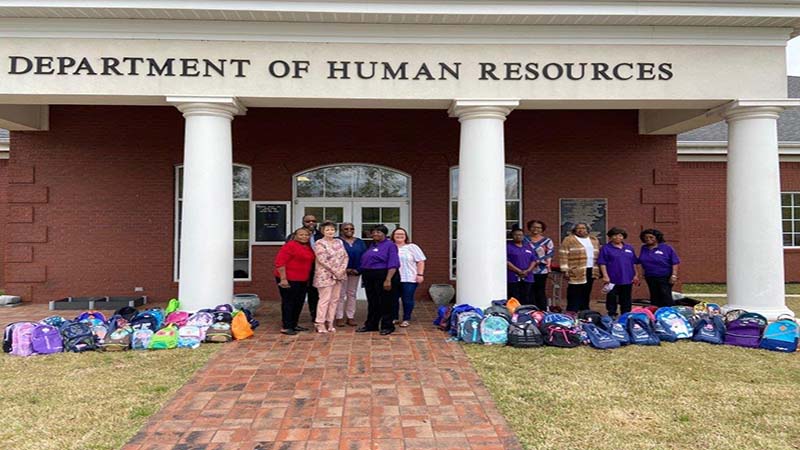 LaFAYETTE — Chambers County foster children have received a book bag with a new set of clothes for the Easter season thanks to a generous donation from the Bowen East District Baptist Association and Women’s Convention. On Monday of this week, a horde of filled book bags were presented to the Chambers  County Department of Human Resources (DHR) for distribution to the county’s foster children. The blue bags were for the boys and the pink ones for the girls. Each bag had a sticker on it listing the sizes of the items inside.

The Usher Ministry was founded in 1998 by the late Oreatha Hardy. It was active in conducting projects on behalf of children until the Covid pandemic hit in March 2020. It’s now resuming a more active role with projects such as the book bag distribution. The book bag project was initiated by Mary Bailey-Mitchell. Her daughter, Sheralyn Hicks, did a similar project in LaGrange. She saw the value in doing this in an episode of the TV show “Law & Order: Special Victims Unit.”

“The episode was about a young girl who had been placed in a foster home,” she said. “In one scene, a social worker was helping the girl get out of the car, and she pulled out a pink book bag. My heart did a flip flop, and I said ‘Thank you, Lord.’  I knew what we could do.”

The book bags being distributed will come in handy in carrying the children’s school-related needs. They can have other uses as well.

In a 1 p.m. CDT ceremony (2 Eastern time), the book bags were given to DHR social workers for distribution to Chambers County foster families.  Dixon said an opening prayer and commended the women of the Usher Ministry for being proactive in helping local children.

Bailey-Mitchell and Hazel Woods are co directors of the Usher Ministry. Other ushers present at the ceremony were Minnie Holloway, Ruth Toles, Alice Hall and Katie Carey.

The Usher Ministry has previously made monetary donations to the foster children’s program.

‘Hope for Alabama,’ star studded theme song for the…