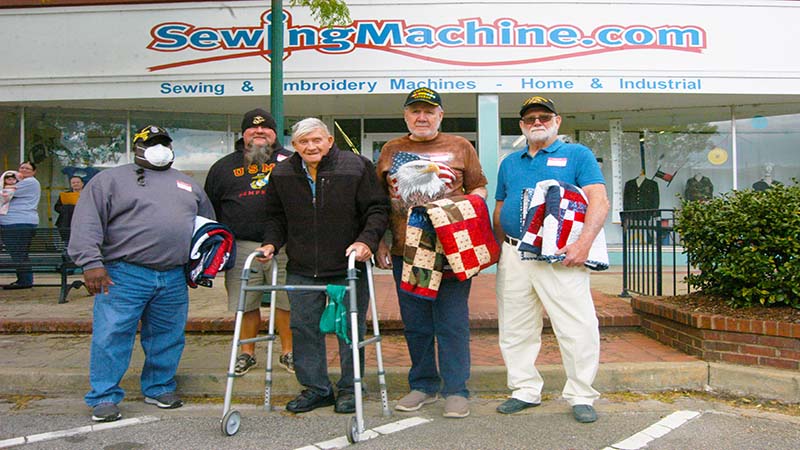 WEST POINT — Two U.S. Army veterans, two from the Navy and a former Marine were honored by the local chapter of Quilts of Valor this past Saturday morning at sewingmachine.com in downtown West Point.

Quilts awarded by the Georgia-Alabama State Line Chapter of the Quilts of Valor are made by a quilting group including Hetty Mapp of Newnan, Angela Maddux of Valley, Teresa B0okwalter of Daviston, Alabama, and Shirley Welch and Carol Cofield, both of Huguley.

Each quilt is awarded to an active duty service member or veteran who has been touched by war. The quality says unequivocally “Thank you for your service and sacrifice in serving our nation.”

The program began with the playing of familiar service songs such as “The Caissons Go Rolling Along” for the U.S. Army, “Anchors Aweigh” for the Navy; “Semper Veritas – We’re Always Waiting for the Calm,” U.S. Coast Guard; “Off We Go Into the Wild Blue Yonder,” U.S. Air Force, and “The Marine Corps Hymn” for the U.S. Marines.

Quilts of Valley local chapter spokesperson Sheila Simpson welcomed everyone to the ceremony.

“West Point is a beautiful place to come to,” she said. “Not every town has a river running through it, but we do, and there’s a lot of fun and interesting things to do here.”

James Hall was the first veteran honored on Saturday. He was in the Navy from 1968 to 1972 and did three tours of duty in Vietnam. He was aboard The USS Virgo AE 30, which supplied the U.S. troops in South Vietnam and the U.S. Pacific fleet with bombs and ammunition. Simpson thanked him on having served in Vietnam.

“We as Americans need to make amends for the way the service members were treated when they returned from Vietnam,” she said. “We want you to know that was wrong, we love you, and we are glad you are back home.”

William Joiner is a native of Warner Robins, Georgia. He received his Marine Corps training at Camp Lejeune in Jacksonville, North Carolina and was in the Marines from 1992-1996. He was stationed in Florida for a time and really enjoyed his stay in Naples, Italy.

“When I was young my mom was in the U.S. Air Force and stationed for a time in Aviano, Italy,” he said. “I visited there when I was in the Marines. It was really neat getting to see it for a second time.”

Vietnam veteran Albert Dale is originally from Morgan City, Louisiana, which is near the Gulf Coast. He said he saw his share of hurricanes while living there. In 1967-68, Dale served aboard The U.S.S. Enterprise (an aircraft carrier, not the famed starship).

“I worked on the hydraulic systems for A-6 bombers,” he said.

When he returned home in 1968 he married a young woman from the Shinbone Valley community in Clay County. He and Diann are still together after 53 years. They now live in Huguley.

“Thank you for doing this for us veterans,” he said. “This kind of recognition is what the U.S.is all about.”

West Point resident William Royster was in the Army for eight-and-a-half years. He was in South Vietnam in 1968.

He also spent time in Texas, Germany and Greenland. He said he’d never forget seeing Jayne Mansfield at a Bob Hope Shaw at Thule Air Base in Greenland.

“I was born and raised in Chambers County,” he said. “We lived near the section of Highway 50 that runs between Camp Hill and LaFayette.”

Charles Jackson knows the exact period he was in service.

“I was in for 26 years, four months and three days,” he said. He now lives in Valley’s Langdale community.

“I grew up in Hurtsboro, Alabama,” he said. “I got to see the Jackson 5 perform there when they were unknowns. I have a video of one of those performances.”

Michael Jackson’s mother, Katherine, is a native of Clayton, Alabama and is 92 years old. The Jackson 5 was founded in Gary, Indiana in 1964. On trips to see their mom’s family in Alabama they sometimes performed in Hurtsboro.

Charles Jackson (no relation) served in the Army National Guard from 1980 to 2006. He was with the 214th MP Company of Tuskegee and the 231st MP Battalion in Montgomery.

Jackson said he appreciated what the quilters were doing and was impressed with the beauty of the quilts they were making.

“I have done some sewing myself.” he said.

“You need to come and help us on Saturdays,” Simpson said.

It took Roberts’ small group some three years to make and award 100 quilts, but as word spread about what they were doing, chapters started organizing all over the U.S. In May 2014, the 100,000th quilt was presented. Since then, the number of presentations in the U.S. has surged past the 300,000 mark. It now stands at 300,677.

The local chapter has made a special effort to award quilts to veterans of World War II and Vietnam. Those Americans who came of age during WW II have often been called “the Greatest Generation.” Precious few veterans of that war are still living. The Vietnam War was a divisive period for our country, and some Americans were rude to soldiers returning home.