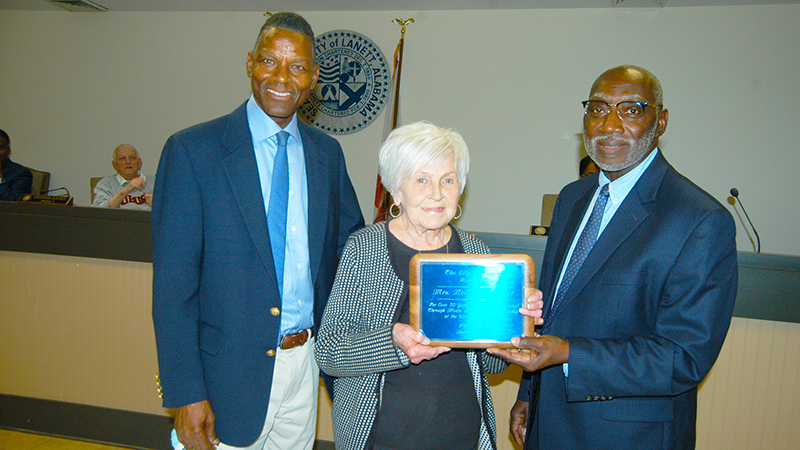 Honored by the council: Nell Walls-Cowart (at center) was honored by the Lanett City Council on Monday. Mayor Jamie Heard (right) and Council Member Tony Malone (left) are shown presenting her a plaque recognizing some 52 years of community service in providing a daily newspaper to the people of the Greater Valley Area. Photo by Wayne Clark.

LANETT — A local woman who played a key role in publishing The Valley Times-News for over a half century was honored by the Lanett City Council on Monday.  Nell Walls-Cowart received a plaque from Mayor Jamie Heard in appreciation of the work she and her late husband, Tom Walls, did in producing a Monday through Friday afternoon newspaper for a total of 52 years. They had a big part in putting out a daily newspaper from the time they moved to the area in 1965 until Mrs. Walls sold the newspaper in 2017 to its current owners, Boone Newspapers.

“We are here tonight to recognize a family who has contributed so much to this city and throughout the Greater Valley Area,” Council Member Tony Malone said. “For 52 years, the Walls family covered the local news in West Point, Georgia and in Lanett, Valley and LaFayette, Alabama.”

When Tom and Nell Walls moved to the Valley in 1965, The Valley Times-News was located in West Point. The building was on the west side of the A&WP Railroad and faced east toward the Chattahoochee River. A back parking lot for Johnny’s Pizza is in that area today. Tom started off as the sports editor but moved up to publisher in 1970. Around that same time, they purchased a lot on North 12th Street across the state line in Lanett and started construction on a new building that remains the home of the newspaper.

“In the 1980s, many women weren’t stepping out front to run major companies, but Mrs. Walls took on that responsibility,” Malone said. “In her first year as publisher, The Valley Times-News won the Alabama Press Association award for being the most improved newspaper in the state.”

“Mrs. Walls guided the ship until 2017, and we are grateful for what she did in seeing an excellent newspaper published,” Malone continued. “We are pleased that The Valley Times-News continues to serve our community today.”

Malone went on to say that in her tenure with The VT-N Mrs. Walls consistently provided the Greater Valley Area with a trusted source of local news and that many residents looked forward to reading the latest edition every Monday through Friday.

Walls was accompanied to the meeting by her son, Joseph, and long-time family friend Greg Frizzler. She maintains a home on Spring Road in Lanett. She and Tom were living there when Joseph was born in 1967. She also has a home on Lake Harding. The family enjoys spending time in both places.