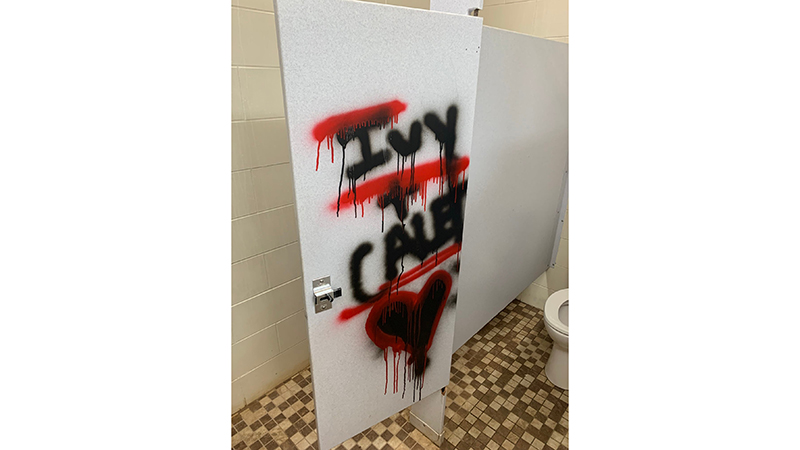 On Thursday, the U.S. Army Corps of Engineers at West Point Lake reported on social media that someone had spray-painted a restroom and water safety banner at Hardley Creek Park overnight on Wednesday. Below their post were several photos of the black and red graffiti.

The restroom graffiti was in the women’s restroom and on an outer wall of the restroom facility, according to David Barr, supervisory park ranger for the U.S. Army Corps of Engineers. The water safety banner instructs viewers to wear life jackets. The graffiti on it makes it harder to read.

Barr said there are no suspects for this particular case of vandalism, and he has no idea why someone did it.

There are no cameras at Hardley Creek Park. Barr explained that like restroom walls, cameras can be vandalized. Additionally, they can be expensive, and someone has to monitor them. Barr also said his organization oversees 21 parks and four campgrounds around West Point Lake, making it difficult to choose which ones to install cameras at.

Barr said it’s hard to say how much it will cost to clean up the graffiti.

“Our contractor is investigating if they have the resources to clean this stuff off, the participants and so forth,” he said. “The exterior wall, they’ll be able to paint over that. The interior walls, hopefully they’ll be able to clean them off. If not, it may involve having to replace the stall door and the wall, which would be about $2,000.”

Barr clarified that by replacing the wall, he was referring to a bathroom stall wall. He said the stall is made of hard plastic and isn’t cheap, costing about $1,500.

“I think they’re going to try to work on it today,” Barr said, referring to graffiti removal.

Barr said this isn’t the first time his organization has dealt with vandalism.

“We have vandalism at different times throughout the year, just random,” he said. “People spray paint things. People knock down signs. We have fee machines where you pay to launch a boat… We just had one a couple of weeks ago – they shot it with a pistol and did damage to the machine.”

Barr urged the public to call 911 if they see someone committing vandalism at the park or to at least get a description of a suspicious vehicle or person.

“Don’t approach them, but try to get any information we can use to determine who might be doing something,” he said.

Pokey’s to participate in animal rescue fundraiser and adoption…