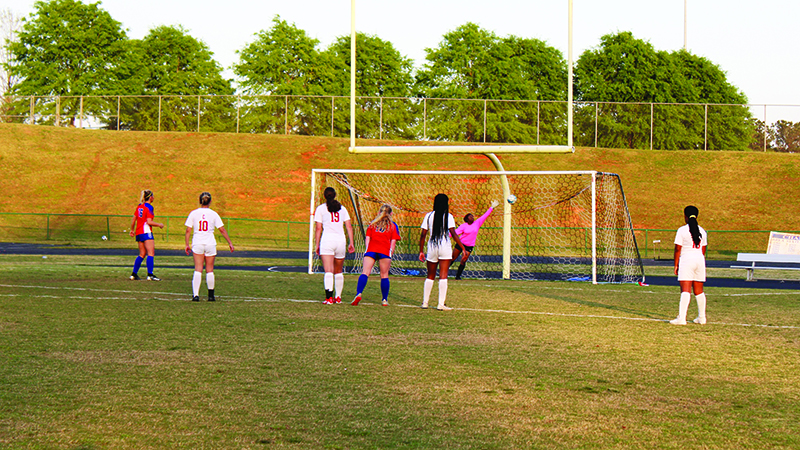 Back of the net: Valley High School’s Emma Williams (far left) watches her shot on goal hit the back of the net Thursday as the Lady Rams won a scoring fest 7-5 over Central High. Photo contributed

The Valley High Boys and Girls Soccer teams celebrated an unforgettable senior night Thursday. Seniors were honored between the boys and girls games. Those senior players are:

Prior to the celebration, the VHS girls won their second game of the year against the 7A Central High Lady Red Devils 7-5.

With this win, the girls have now won multiple games in a season for the first time in school history. The win is also the first against Central for this girl’s program.

“This one is special for a number of reasons,” Elliot said. “For starters, I love that we got to send this group of seniors out with a win. Regardless of the ups and downs throughout the years, this year’s (boys and girls) senior class has been resilient. They’ve pushed themselves every week (along with the rest of the team). It sounds cliche, but they will always be winners in my book.”

The boys team fell to Central High School 8-1. The lone goal for Valley came from sophomore Jose Robles – his first career point for the Rams. Elliott said despite the loss, he is proud of the improvements the team has made.

“Another tough loss for us,” Elliot said. “I wish we could have sent the boys seniors out with a win. That being said, I am still proud of the improvement we have seen week to week. We are still getting better. Also really happy for Jose for scoring his first goal. The future is bright.”

VHS concludes its season on Friday, April 22 when they travel to Eufaula for their final region game of the year. The girls dropped Eufala 2-1 in the last meeting.